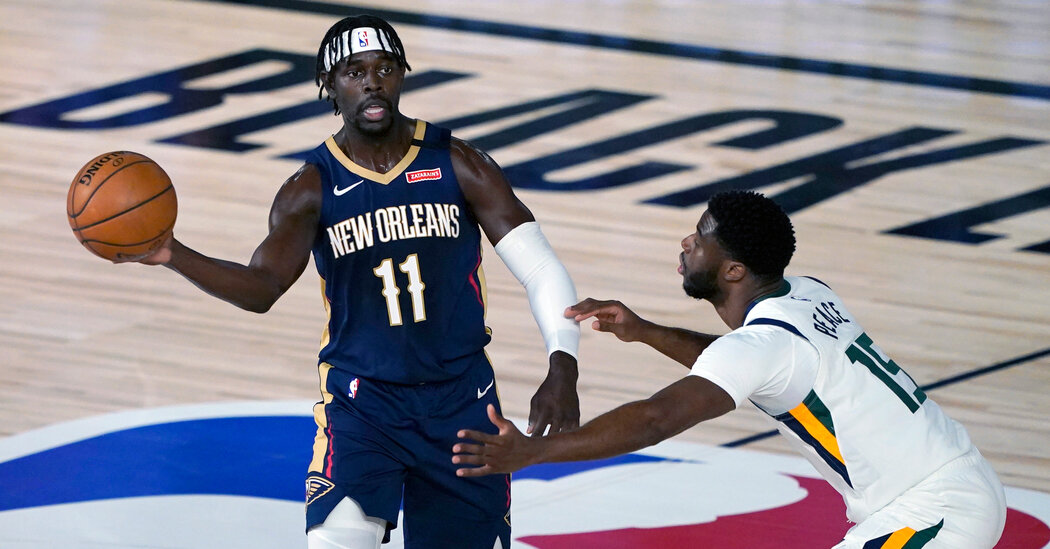 The Milwaukee Bucks, under immense pressure to upgrade their roster to persuade Giannis Antetokounmpo to pledge his long-term future to the franchise after multiple playoff failures, arranged a bold trade late Monday to acquire the in-demand Jrue Holiday from the New Orleans Pelicans.

The Bucks have agreed to send a hefty package of draft picks and veterans to the Pelicans to beat out several teams interested in Holiday, according to two people with knowledge of the transaction who were not authorized to discuss it publicly. The package includes the veteran guards Eric Bledsoe and George Hill; three future first-round draft picks; and the right to swap two more future first-round picks.

The move, though, does not come without tremendous risk for the Bucks. Antetokounmpo becomes eligible on Friday to sign a so-called supermax five-year contract extension expected to exceed $230 million — but the window for that deal only lasts until Dec. 21. Antetokounmpo, 25, won the N.B.A.’s Most Valuable Player Award the past two seasons.

Milwaukee will not automatically lose Antetokounmpo if he declines to sign the extension, but that scenario would set him up to become an unrestricted free agent after the 2020-21 season. Holiday, 30, who has just one guaranteed season left on his contract, can also become a free agent next summer, raising the daunting possibility that he and Antetokounmpo could walk away after just one season together.

To bring in Holiday, Milwaukee is thus parting with several draft assets that it would likely need to rebuild if Antetokounmpo decides to leave. Holiday has earned only one All-Star appearance in his 11 seasons but is widely regarded as one of the best two-way guards in the league.

Early Tuesday, shortly after the Bucks and the Pelicans agreed to the Holiday trade, Milwaukee also arranged a sign-and-trade deal with the Sacramento Kings to bring the restricted free agent Bogdan Bogdanovic to the Bucks after the league’s free-agent market opens later this week, according to a person with knowledge of the deal who was not authorized to discuss it publicly.

Although such an agreement would appear to violate the league’s tampering rules that forbid free-agent negotiations before Friday at 6 p.m., the Bucks planned to trade Donte DiVincenzo, Ersan Ilyasova and D.J. Wilson in an eventual deal for Bogdanovic and Justin James that can be officially consummated Sunday, the person said, confirming an agreement first reported by ESPN. The additions of Holiday and the sharpshooting Bogdanovic appear to significantly boost the Bucks’ potency on the perimeter, which has been lacking in support of Antetokounmpo over the past two postseasons.

Holiday averaged 19.1 points, 6.7 assists and 4.8 rebounds per game last season and earned selection to the N.B.A. all-defense team in 2017-18 (first team) and 2018-19 (second team). On a podcast in August hosted by the Pelicans’ JJ Redick, Damian Lillard of the Portland Trail Blazers called Holiday “the best defender in the league.” The Nets’ star Kevin Durant said in a subsequent podcast with Redick that Holiday was “probably the best defender in the league at the guard position.”

The Nets were among the many teams interested in Holiday, but the Pelicans were holding out for a draft haul similar to what they received in July 2019 when they traded Anthony Davis to the Los Angeles Lakers. David Griffin, New Orleans’ executive vice president of basketball operations, has acquired six first-round picks in the two trades along with the All-Star forward Brandon Ingram and the former Lakers guards Lonzo Ball and Josh Hart to flank the Pelicans’ new franchise cornerstone Zion Williamson.

The Bucks had been actively shopping Bledsoe after his well-chronicled postseason struggles and a disappointing second-round exit in last season’s playoffs. Holiday, who is scheduled to earn $26.1 million this season and holds a $27 million player option for 2021-22, joins Antetokounmpo and the All-Star swingman Khris Middleton in Milwaukee’s new star trio.