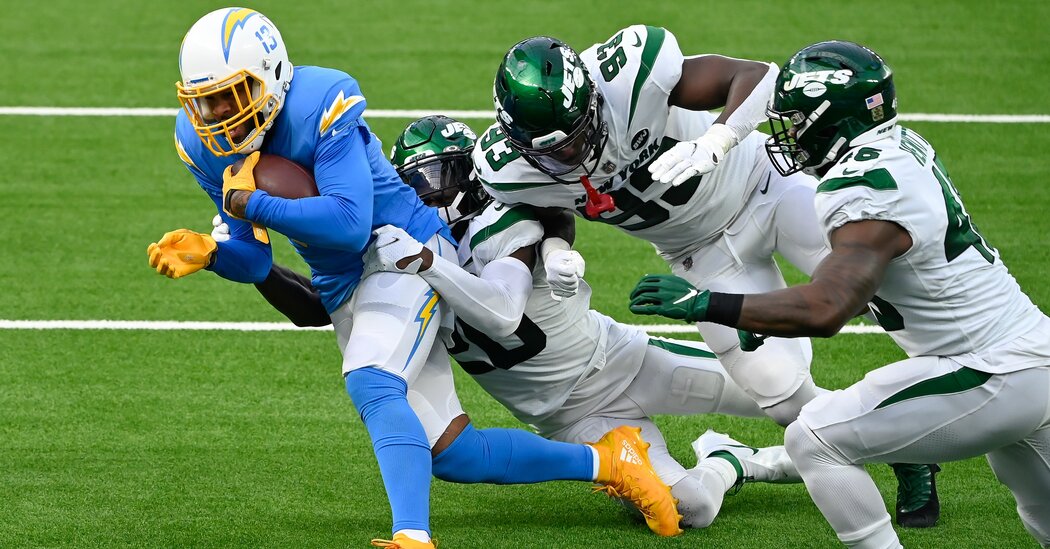 INGLEWOOD, Calif. (AP) — Keenan Allen set a single-game Chargers franchise record with 16 receptions, Justin Herbert threw for 366 yards and three touchdowns and Los Angeles held on for a 34-28 victory over the Jets on Sunday to snap its three-game losing streak.

Allen also tie Antonio Brown as the fastest to reach 600 receptions. Both reached the mark in their 96th games. It is also Allen’s sixth game with 13 or more receptions, the most by a player in N.F.L. history.

Allen had 145 yards receiving, including 13-yard touchdown catch in the third quarter to extend the Chargers’ (3-7) lead to 31-13. The Jets would rally to get within 34-28 in the fourth quarter on Frank Gore’s 1-yard run and Joe Flacco’s 6-yard pass to Chris Herndon.

The Jets (0-10) — off to the worst start in franchise history — drove to the Los Angeles 32 with less than a minute remaining before turning the ball over on downs.

“We can obviously play with teams,” Flacco said. “If confidence is lacking — and listen, it’s tough for it not to be — we have to definitely find ways to keep ourselves going. But I think you can definitely see that we should have no lack of confidence. We can definitely go out there and compete to win these football games. And we just need to have that mind-set from the very first whistle.”

Herbert, who completed 37 of 49 passes, again had a day in which he established a bunch of rookie superlatives. He extended his streak of games with multiple touchdown passes to seven and had his fifth 300-yard passing game, becoming the fifth rookie in league history to reach that mark.

Herbert’s 39-yard connection with Mike Williams early in the second quarter made him only the fifth quarterback in league history to reach 20 touchdown passes in nine or fewer games.

Flacco, starting his fourth game in place of the injured Sam Darnold, was 15 of 30 for 205 yards with two touchdowns. He struggled in the first half, which included a pick-6 in the first quarter to Tevaughn Campbell that gave the Chargers a 7-6 lead.

The Chargers’ Ty Long had a punt blocked for the third time in four weeks as special teams mistakes affected the Chargers early and led to the Jets’ first touchdown.

Jets defensive lineman Henry Anderson blew by Joshua Kelley, giving Long no chance to get the kick off. Quinnen Williams recovered the ball on the Chargers’ 29-yard line, and La’Mical Perine — who later left the game with an ankle injury — went 5 yards up the middle to make it 6-0.

The Jets also had special teams problems. Sam Ficken missed two extra points in his return from a groin injury that sidelined him for three games.

Keeping a positive mind-set will be crucial for the Jets over the final six games, which includes four teams in the playoff chase and division foes Miami and New England.