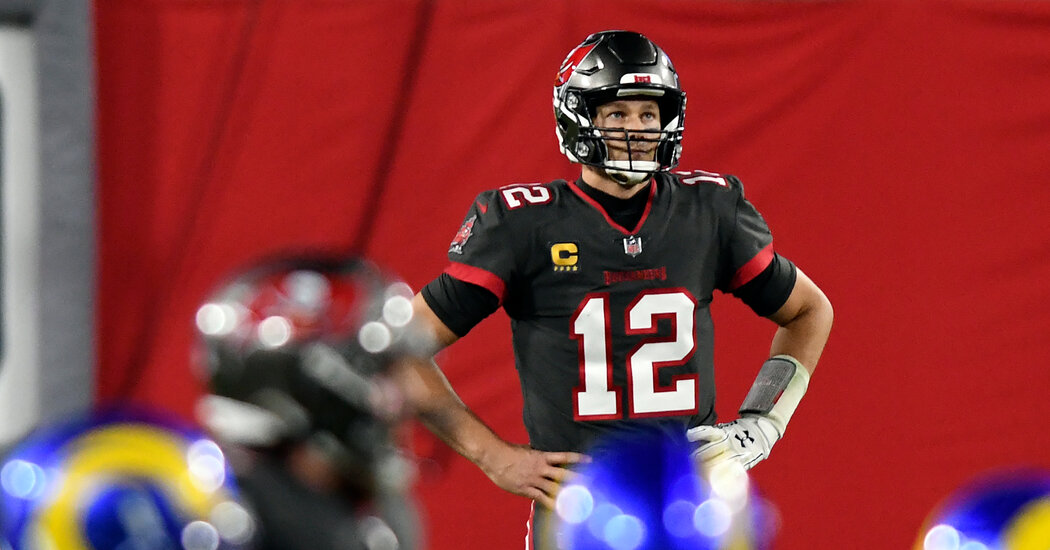 It’s one of the first rules you learn when you get taken into the backyard and taught how to play football:

You can only throw one forward pass each play.

On Monday night, Tom Brady tried to get away with breaking that rule. And in a way, it worked.

Early in the fourth quarter of Tampa Bay’s game against the Los Angeles Rams, Brady’s Buccaneers had a third-and 10 at their 34-yard line. Brady threw over the middle, but the ball was blocked at the line of scrimmage by linebacker Terrell Lewis.

A lot of good things have happened to Tom Brady in his life, and here came another. The deflected ball, which could have gone in almost any direction, caromed directly back to him. Brady reacted with lightning speed, snatched the carom out of the air and … passed the ball again?

Yes, perhaps because of a brain freeze, or maybe because he thought no one would notice, Brady tried his second pass of the play. That’s a violation of the rules of the N.F.L., the X.F.L., the Canadian Football League and just about every type of organized football down to your cousin’s youth league.

Brady’s second pass was completed to Mike Evans, but the officials were less than impressed. Flags flew, and Brady was called for a penalty.

But wait. Evans was brought down two yards short of a first down. So with the Buccaneers now facing fourth and 2, the Rams declined the penalty. The play, and the double completed pass, stood.

N.F.L. drive charts rarely make for interesting reading, but this one will forever. Tucked near the start of the fourth quarter, it dryly notes exactly what happened:

It goes on to note that “Statistically, no completion for first pass as a result of the declined penalty.” So Brady, at least, will be spared the negative yards on the catch, which would have only reduced his own passing total.

It was not the first time since joining Tampa Bay this year that Brady, 43, seemed to struggle with a bedrock football rule. In October, he appeared to lose track of the one about being allowed four downs each series. After failing to convert a fourth down against the Bears, he remained on the field and held up four fingers as if he thought he had another play.

The Buccaneers lost that game, and they lost Monday night as well, 27-24. But at 7-4, they are still in the driver’s seat for a playoff berth.

If Tampa Bay makes the postseason, Brady will need to remember that the rules of football apply there, too.