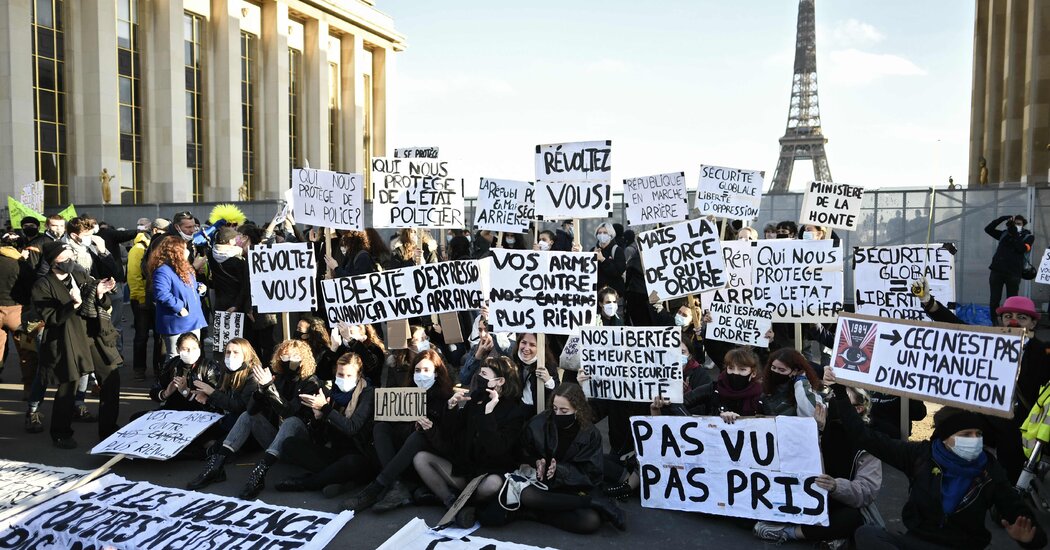 PARIS — Video of police officers beating a Black man in Paris caused an outcry in France on Thursday, fueling criticism of a new bill that would place restrictions on sharing footage of security forces as the French authorities grapple with longstanding accusations of police racism and brutality.

The beating, on Saturday, only came to light because of a graphic video posted Thursday on social media by Loopsider, a French digital news outlet. By Thursday evening, it had been viewed more than 8 million times — days after video of police forcefully clearing migrants from a protest camp in Paris sparked a similar outcry.

Prosecutors in Paris have opened an investigation into the beating, and the officers involved have been suspended. The police in Paris also said that an internal inquiry had been opened.

“They sullied the uniform of the Republic,” Gérald Darmanin, the French interior minister, told France 2 television on Thursday evening, adding that if investigations confirmed the officers had acted wrongly — there was “little doubt,” he said — they would be fired.

The beaten man, Michel Zecler, a music producer, told Loopsider that he had been approaching his recording studio on Saturday evening when he spotted a police car on a side-street in the 17th Arrondissement, an upscale residential area of northwestern Paris.

Fearing a fine because he was not wearing a mask, which is mandatory in France because of the coronavirus pandemic, Mr. Zecler said he quickly entered the studio. Three police officers exited the car and followed him inside.

Security camera footage obtained by Loopsider shows that a scuffle began when Mr. Zecler resisted the officers as they grabbed him. The officers pummeled him repeatedly over several minutes, using their fists and feet, as well as a police baton. Mr. Zecler said that the officers also had insulted him and used a racial slur against him.

Alerted by the commotion and Mr. Zecler’s cries for help, a group of young artists who were attending a recording session in the studio’s basement came upstairs, and managed to push the police out the door, just as reinforcements were arriving.

The police tried to force their way back into the studio, according to videos filmed by neighbors and obtained by Loopsider, before throwing a tear-gas canister through the window, which quickly filled the small enclosed entrance with gas.

“‘It’s my last day and I don’t know why,’” Mr. Zecler said he was thinking at the time, telling Loopsider that the beating left bruises across his body, a torn tendon and a head wound.

Several officers pointed firearms toward the entrance. Mr. Zecler came out and was arrested, as were the nine young men from the recording studio, who told Loopsider that they were also held at gunpoint and hit by officers. The nine men were released the same day without charge.

Speaking to reporters in Paris on Thursday, Mr. Zecler said the incident had left him feeling fearful.

“The people who are supposed to protect me are holding me at gunpoint,” he said, adding that many police officers “did their work well” and that he felt lucky the incident had been caught on video.

“I would like that it never happen again, for anyone,” he said. “Camera or no camera.”

Hafida El Ali, Mr. Zecler’s lawyer, told reporters that he was “lucky to have these videos” showing acts of police violence that are “isolated” but “exist.”

The beating came amid heated debates over a new security bill pushed by President Emmanuel Macron’s government, which includes a provision that prescribes a penalty of a year in prison and a fine of about $54,000 for anyone who broadcasts “the face or any other identifying element” of police officers in action if the goal is to “physically or mentally harm” them.

Critics say that language is too open to interpretation and intended to discourage journalists and bystanders armed with smartphone cameras from documenting police brutality, amid growing criticism of aggressive police tactics and resistance from police unions. George Floyd’s death in Minneapolis last summer has also prompted scrutiny of racism within the French police force.

Opponents of the bill seized upon footage of the beating to argue the bill should be scrapped, even though it was unclear that the provision would have applied in this case. The bill was passed by France’s lower house of Parliament this week and will be examined by the French Senate in January.

“Without the videos nothing would have come out,” Julien Bayou, the head of Europe Écologie — Les Verts, France’s Green party, said on Twitter. “Videos that you want to ban. To protect police officers who carry out their mission with integrity? Or to guarantee the impunity of this behavior that dishonors the uniform?”

The French government tried to quell the criticism on Thursday by announcing that it would establish a special commission headed by France’s human rights watchdog to look at ways of rewriting the provision.

After the incident on Saturday, the officers said in their report that they had been trying to stop Mr. Zecler for failing to wear a mask when, in their telling, he forcefully pushed them into the building, according to Agence France-Presse. The officers also say he hit them several times and tried to grab their weapons, according to the news agency.

But on the security camera footage, the officers seem to follow Mr. Zecler inside, and he tries to protect his face and body but does not appear violent toward the officers or appear to reach for their weapons.

The Paris police, citing the investigation, declined to comment.

Mr. Darmanin argued on France 2 that the “vast majority” of security forces acted professionally, saying that only 9,500 incidents were flagged every year, out of a total of roughly 3 million police operations.

He also made public a preliminary internal police report on the evacuation of the migrant camp earlier this week, which faulted one officer who had tripped a running migrant for using a “disproportionate use of force.” But the report said more time was needed to review other incidents during the evacuation.

The outcry over Mr. Zecler’s beating was swift and broad on French social media, even drawing condemnation from French sports stars — who are usually less vocal than their American counterparts on heated social debates — like Rudy Gobert or Kylian Mbappe.

Valérie Atlan, who works with Mr. Zecler at the recording studio, told Loopsider that she did not understand why he had been targeted so violently.