Just in time for its National Day in October, China completed construction of a new village high in the mountains where the Chinese region of Tibet meets the kingdom of Bhutan. A hundred people moved into two dozen new homes beside the Torsa River and celebrated the holiday by raising China’s flag and singing the national anthem.

“Each of us is a coordinate of the great motherland,” a border guard was quoted as saying by an official state news agency, China Tibetan News.

The problem is, these new “coordinates” are more than a mile inside what Bhutan considers its territory.

The construction, documented in satellite photos, followed a playbook China has used for years. It has brushed aside neighbors’ claims of sovereignty to cement its position in territorial disputes by unilaterally changing the facts on the ground.

It used the same tactics in the South China Sea, where it fortified and armed shoals claimed by Vietnam and the Philippines, despite promising the United States not to do so.

This year, China’s military built up forces in the Himalayas and crossed into territory that the Indians claimed was on their side of the de facto border. That led to China’s bloodiest clash in decades, leaving at least 21 Indian soldiers dead, along with an unknown number of Chinese troops. The violence badly soured relations that had been steadily improving.

Even when challenged, China’s territorial grabs are difficult to reverse short of the use of force, as the Indian government has learned. Since the dispute at the border, Chinese troops have remained camped in areas that India once controlled.

“In the end, it reflects the consolidation of China’s control over the area it claims,” said M. Taylor Fravel, director of the Security Studies Program at the Massachusetts Institute of Technology and an expert on China’s military.

Over the past year, China has moved aggressively against many of its neighbors, seemingly with little regard for diplomatic or geopolitical fallout. Its actions reflect the ambition of China’s leader, Xi Jinping, to assert the country’s territorial claims, economic interests and strategic needs around the world.

The construction of the Himalayan village suggests that China has extended a broader campaign to fortify its southern flanks to include Bhutan, the Buddhist nation of 800,000 people that popularized the concept of “gross national happiness.”

As the construction was underway on that long-disputed border, China added a new claim this summer to nearly 300 square miles of territory in the Sakteng Wildlife Sanctuary, a preserve on the other side of Bhutan from where the village was being built.

In pushing its boundaries, China appears to have brushed aside decades of quiet and ultimately fruitless talks to finalize the two countries’ border. A 25th round of talks this year was postponed because of the coronavirus.

“The Chinese obviously seem to be losing patience,” Tenzing Lamsang, editor of the newspaper The Bhutanese and president of the Media Association of Bhutan, wrote on Twitter.

The dispute stems from different interpretations of a treaty signed in 1890 by two now-defunct imperial powers, the United Kingdom as India’s colonial ruler and the Qing dynasty in China.

The new village is near the Doklam Plateau, where the borders of China, India and Bhutan converge. The plateau was the site of a 73-day standoff between Indian and Chinese troops in 2017 that began over the construction of a road into Bhutanese territory. India, which is obliged to defend Bhutan under a longstanding security pact, pushed troops forward to halt the Chinese work.

Bhutan, which in recent years has felt squeezed between the two giants, poses no military threat to China. For China, control of the area would give its forces a strategic position near a narrow strip of land in India called the Siliguri Corridor.

That area, which Indian military strategists also call the Chicken Neck, connects the bulk of India to its easternmost provinces bordering Bangladesh, Myanmar and China.

Mr. Lamsang noted that Bhutan has long had to defer to India’s security interests. In its repeated talks with the Chinese, Bhutan has so far been unwilling to make any territorial concessions along the western and central borders.

“Given Bhutan’s refusal to concede in the talks or even agree to compromises by China we are now paying a price,” Mr. Lamsang wrote.

Neither the Bhutanese nor the Chinese foreign ministry responded to requests for comment.

Global Times, a Communist Party newspaper that often echoes a hawkish view among Chinese officials, ridiculed the claims that the newly built village was in Bhutan, blaming India for stoking tensions with China’s southern neighbors. A day later, the newspaper warned against “looming foreign forces backing the China-bashing campaign across the Himalayas.”

The exact location of the new village, called Pangda, emerged in a series of satellite images published recently by Maxar Technologies, a company based in Colorado. They showed that construction began late last year and was completed, it seems, not long before Oct. 1, China’s National Day. China’s version of the border lies south of the village. 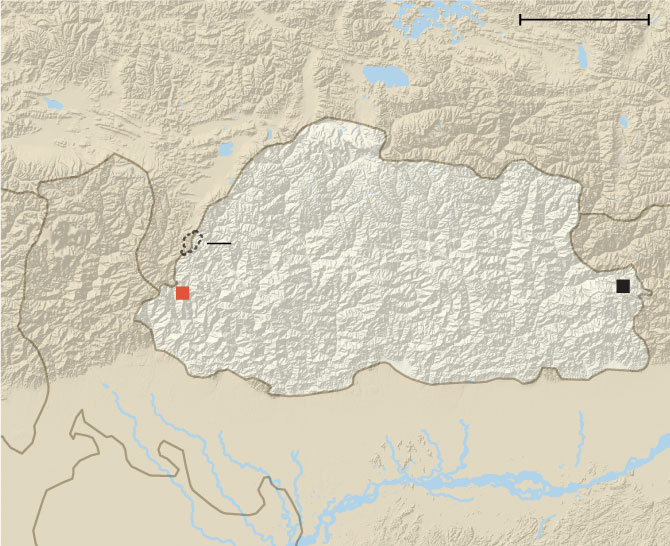 The images also showed extensive new road-building and the construction of what seem to be military storage bunkers, according to a Maxar spokesman, Stephen Wood. The bunkers are in undisputed Chinese territory, though, indicating that China has sought to build up its military presence along much of the Himalayan border area. The images of China’s new construction were earlier reported by NDTV, a broadcaster in India.

China has made no secret of the construction, as evidenced by several state media reports on the village. One recounted an inauguration ceremony on Oct. 18 that was attended by senior officials from Shanghai, including Yu Shaoliang, deputy secretary of the city’s Communist Party committee.

In China, richer provinces often sponsor development projects in poorer regions, especially in Tibet and Xinjiang. China absorbed Tibet beginning in 1950, with the new Communist government seeking to reassert sovereignty over the Tibetan people and territory that had been lost after the fall of the Qing dynasty. Although the Chinese called its annexation the “Peaceful Liberation of Tibet,” many Tibetans are unhappy with Chinese rule.

Mr. Fravel of M.I.T. said that with its recent construction, China appeared to have backed away from potential compromises that it floated in earlier rounds of border talks with Bhutan, in which it offered to trade swathes of territory.

“Previous compromise ideas from the 1990s may no longer be on the table,” he said, “as China may be unwilling or unlikely to withdraw from territory where it has erected such infrastructure.”