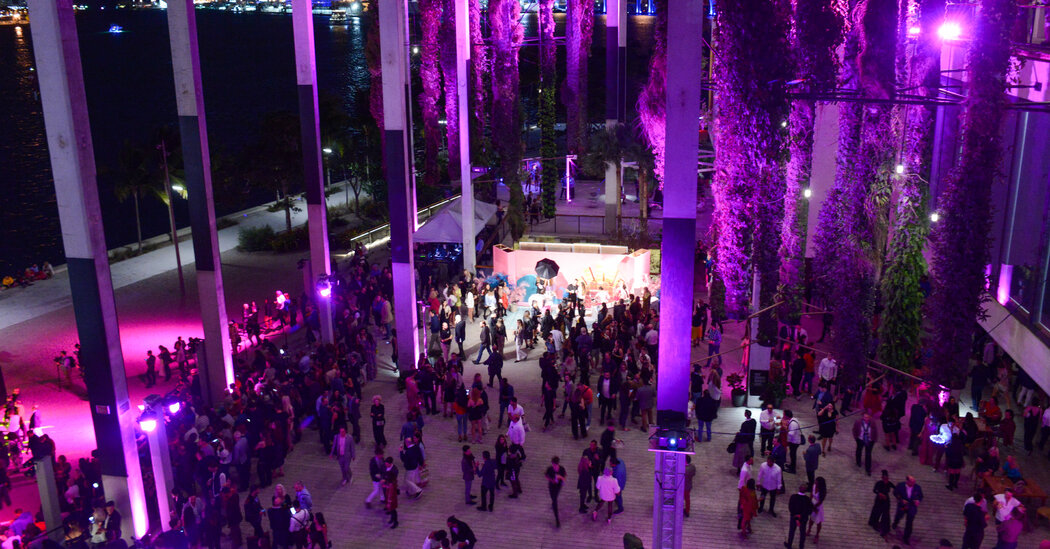 Art Basel Miami Beach, the annual fair that usually draws the contemporary art world to South Florida and was scheduled for this week, has been canceled — a cultural casualty of the coronavirus.

But the city’s art scene is anything but quiet these days.

Previously closed museums announced ambitious new in-person exhibitions. Galleries were rolling out formidable solo shows, as were hotel lobbies and poolside bungalows. One leading fair had sprung back to life: Design Miami, partly owned by Art Basel, was being staged in a scaled-down manner, with 10 galleries setting up inside a storied building on the mainland.

The local pandemic toll is jarring: During the past seven days, Miami-Dade County, recorded 49 new deaths from Covid-19, and nearly 13,000 new infections.

While the city’s in-person art-scene activity was being billed as masked, socially distant, and crowd controlled, it was hard to ignore the symbolism of the Miami Beach Convention Center — the planned site of the Basel fair — currently being used as a coronavirus testing site.

“I understand some are saying ‘Oh my God, this will be a disaster to do this kind of thing,’” Craig Robins, founder of Design Miami, said. “It’s the opposite. It’s not about a bunch of people flying in from around the world. It’s about a bunch of people spending the season in South Florida and doing things that they feel are within boundaries that are responsible.”

And it’s about promoting homegrown talent.

A pre-Thanksgiving opening featured the solo debut of Reginald O’Neal, who grew up in one of Miami’s poorest neighborhoods and whose work includes portraits of his incarcerated father and younger brother, both in their prison jumpsuits.

A Miami Art Week without a big Basel party could be a possible blessing, said Mr. O’Neal, allowing the city’s own talent to take center stage and avoid being overshadowed.

“It feels like this gives Miami the opportunity to shine on itself, not just to international people,” he said. “To show ourselves we’re going to be supportive to our own community.”