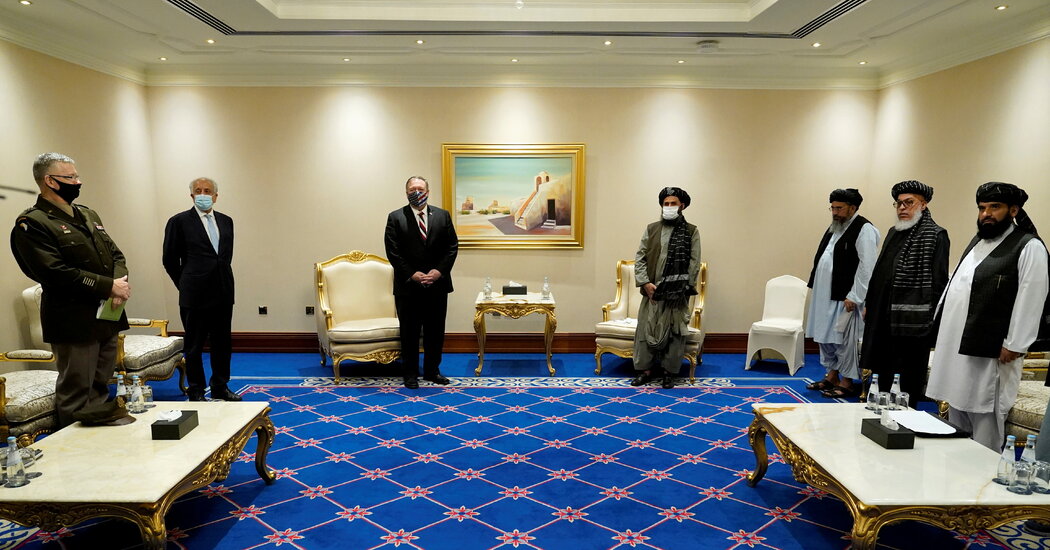 Afghan government and Taliban negotiators in Qatar have agreed to the principles and procedures that will guide the ongoing peace negotiations between them, Taliban and Afghan officials announced on Wednesday, an important move that could pave the way for talks that have been hobbled by disagreements for more than two months.

“The procedure including its preamble of the negotiation has been finalized,” Nader Nadery, a member of the government’s negotiating team, said on Twitter. Almost simultaneously, Mohammad Naeem, a spokesman for the Taliban, posted a nearly identical tweet written in Pashto.

Having resolved questions about how to conduct the talks, negotiators will likely move on to focus on a political road map for both sides and a long-term, nationwide cease-fire.

The agreement comes after both sides were on the precipice of a breakthrough last month. Taliban and government negotiators had agreed in principle to roughly two dozen procedural points, Afghan officials said, but a concrete agreement was stonewalled by Afghan President Ashraf Ghani when he directed the government negotiating team to include at least one more condition: that the government be referred to by its formal name, the Islamic Republic of Afghanistan, in the guiding documents.

These types of details have broken down efforts to negotiate before. The Taliban’s past insistence on being referred to as the Islamic Emirate of Afghanistan — the name of their government when they were in power in the 1990s — derailed an effort at talks in 2013.

Officials said Mr. Ghani had likely attempted to delay the talks in hopes that the incoming Biden administration would backtrack on the ongoing U.S. troop withdrawal or alter its approach to overseeing the peace negotiations. Under President Trump, Afghan officials complained bitterly that they were excluded from U.S.-Taliban peace talks, and were bullied into parts of the process for political expediency.

In a statement Monday, Sediq Sediqqi, an Afghan presidential spokesman, rejected any such claims over the stalled negotiations, saying that Mr. Ghani is “steadfast in his resolve to make the peace talks succeed.” On Wednesday, Mr. Sediqqi said the Afghan president “welcomes the finalization of the negotiations procedures.”

How both sides settled their procedural disagreements is not exactly clear, but two Afghan officials familiar with the talks said that Wednesday’s agreement was reached without the inclusion of the Afghan government’s official name, nor mention of the Islamic Emirate in the documents.

The agreed-upon principles did resolve a reference to the Hanafi school of Islamic thought, one of the four major Sunni schools, which is also the foundation of the current Afghan Constitution. Initially, the two sides were at odds on a formulation that does not alienate other sects, particularly Afghanistan’s Shiite minority. The officials said that dispute was resolved in favor of the Afghan government’s approach and disagreements will be instead referred to a religious committee.

The Afghan government balked at including the agreement in its arrangements with the Taliban, as the government was not a party to the deal. To resolve the issue, the February agreement is mentioned, but the guidelines included a nod to at least one other framing document, the officials said.

“As negotiations on a political road map and permanent cease-fire begin, we will work hard with all sides for serious reduction of violence and even a cease-fire during this period,” Zalmay Khalilzad, the U.S. special envoy for Afghan peace, wrote on Twitter Wednesday, shortly after the announcement. “This is what the Afghan people want and deserve.”

The months of talks in Doha, Qatar’s capital, have been marked by near-constant violence in Afghanistan as the Taliban moved to take territory in the south and north before winter. At least 205 Afghan security forces and 196 civilians were killed as a result of the fighting in Afghanistan in November, according to data compiled by The New York Times.