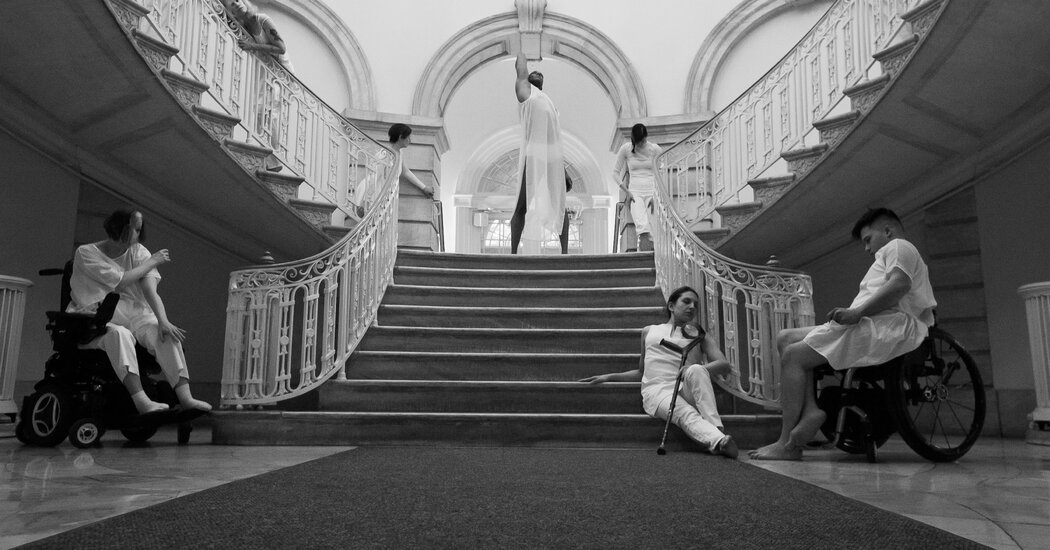 It’s not polite to stare. Especially if you perceive the person you’re looking at as different in some way. But if you avert your eyes quickly, there’s no time for your perception of difference to change.

“On Display” disrupts this pattern. It’s a performance art exhibition, a group of people acting as if they were sculptures. They pose in stillness, with their eyes open, or move between poses very slowly, eyes closed. They do this for hours. There’s lots of time to look, to see and be seen.

By design, these bodies exhibit difference. “On Display” is a project of Heidi Latsky Dance, the kind of company called physically integrated, which means that its diverse array of dancers includes many who are disabled. The project began in 2015 as guerrilla art in Times Square commemorating the 25th anniversary of the Americans with Disabilities Act.

“In stillness, the dancers are beautiful, vulnerable,” Ms. Latsky said in a phone interview. “But there’s also a fierceness in their ability to be exposed. The longer they’re still, the more you can see.”

That first iteration went so well that Ms. Latsky remarked to a friend that she wished people could do it all over the world on a given day. The friend — Kelly Drummond Cawthon, the creative director of Second Echo, a Tasmanian ensemble that trains and employs artists with and without disabilities — responded with a date: Dec. 3, the United Nations’ International Day of Persons With Disabilities. Thus “On Display Global” was born.

Since then, it has expanded from New York and Australia to dozens of sites across the world. And this year, it’s going to be even larger — a 24-hour Zoom gathering on Thursday with performers from more than 30 countries, grouped by geography into segments that are a half-hour to two hours long. Join at 12 a.m. Eastern time, and it’s a window to the Tasmanian Museum and Art Gallery. Join later, and the virtual view might open onto apartments in Amsterdam or rooftops in Iran.

Also on Thursday (through Saturday), the disability arts ensemble Kinetic Light is streaming a film of its acclaimed work “Descent” via the website of the University of Minnesota, Northrop. In aim and approach, “Descent” differs greatly from “On Display.” And that means that the two projects, taken together, can throw a little light on the variety of disability dance today.

“The field is broad and complicated,” Alice Sheppard, Kinetic Light’s artistic director, said in a recent interview. “No one work should be taken as representative of the whole. As we would expect of any other group, there are different subcultures, different interpretations.”

‘On Display’: Seeing the real me

“When I’m dancing in ‘On Display,’ I’m giving the spectators an entree to gawk,” said Quemuel Arroyo, who joined Heidi Latsky Dance in 2015. “I allow them to see me, but the real me, to see me as I want to be seen.”

For Mr. Arroyo, that means as a dancer, a performer, “a person with abilities despite my disability.” He broke his spine in a mountain biking accident 13 years ago and has used a wheelchair ever since. An athlete — a rock climber, sailor, scuba diver — he likens the experience of being in “On Display” to sky-diving.

“It’s scary and it’s uncomfortable,” he said. “You think, ‘What the hell am I doing, letting these people look at me?’ But the other part of my mind is thinking, ‘Isn’t this awesome? Here I am, tearing apart misconceptions about what a person with disabilities can offer.’”

“It shows how we’re not very different from one another,” he continued. “It doesn’t matter that I’m Dominican, that I’m in a wheelchair. It’s my humanity that people see.”

Donald Lee, another company member, said that “On Display” is about “quieting and emptying and getting to the core of your being.” It’s also about entering into the unknown. “You’re sculpted by time and the environment like a Calder mobile,” he said. “You become the art, a self-portrait.”

When Mr. Lee, a bilateral amputee, first saw photos of himself in “On Display,” he was shocked. “I had never looked at my stumps,” he said. “I had never seen myself that way before, as a work of art.”

Mr. Lee believes that people who watch “On Display” can experience similar revelations. “When they see me, they see something in themselves,” he said.

Both Mr. Arroyo and Mr. Lee stress the importance of integration and lament how their nondisabled colleagues are often treated as invisible by audience members and the media. “The whole idea of ‘On Display’ is that we want everybody to be seen,” Mr. Lee said. “You’re not seeing a disabled person. You’re seeing our society. You’re seeing yourself.”

Aspects of this year’s event will be different, of course. The shared gaze isn’t the same over Zoom. Everyone will be muted. Because of the pandemic, many if not most performers will be alone, at home in their private spaces. That’s a new sort of intimacy and exposure. (The 10 dancers from Nalitari, a troupe in Yogyakarta, Indonesia, are gathering, distanced, in their company studio. They don’t have internet connections at home.)

Joining for the first time is a group from Beirut. Some of these participants became physically disabled very recently, in an explosion that rocked the city in August. And as the group’s organizer, Shirine Jurdi, explained in a video call — a call interrupted by one of Lebanon’s regular power outages — participating in the event also has benefits for those experiencing other challenges and trauma, as many in Beirut are. She said a virtual practice session with Ms. Latsky relaxed her: “It was the first night since the explosion that I slept.”

Even in virtual form, the project’s ethos of inclusiveness remains constant. “It’s not just people with disabilities,” Ms. Latsky said. “It’s a meditative space where the world can come together.” Viewers have the option of turning their own cameras off or on.

Ms. Sheppard began her dance career in physically integrated companies. That, she said, is still the only way for a disabled dancer to get training. But what she does with Kinetic Light, she emphasized, is different from the physically integrated model. It’s rooted in the conversations, politics and perspectives of people in the disability community, in inside jokes and states of being.

“I’m not some amazing person doing all this work,” she said. “Over here, in the culture, people have practices and knowledge and history that are way beyond the question of ability or non-ability, the language of ‘despite disability.’ This work is how people are. It’s just that it hasn’t fully registered in the nondisabled world.”

Almost all of “Descent” — from the choreography and performance to the design of the lighting, set, sound and custom-made wheelchairs to the film editing and audio description app — is the work of disabled artists. “And that changes the work,” Ms. Sheppard said. “It allows you to ask different questions about who is centered.”

Take the set. While access ramps are often ugly or merely functional, this ramp is reimagined for the aesthetic and sensual pleasure of wheelchair users. Ms. Sheppard and Laurel Lawson, while suggesting a love story between Venus and Andromeda and borrowing poses from Rodin sculptures, ride its curves with roller-derby force and ice-dance grace.

Or consider the audio version for blind audience members. It’s less a description of a visual experience than a separate sonic one, a companion work of art. “Sighted folks, less expert in ways of listening, often find it overwhelming,” Ms. Sheppard noted.

“Rather than access being retroactive accommodation, we’re thinking about access from the very beginning,” Ms. Sheppard said. “When you invite someone to a show, you want them to experience it, not somebody else’s description of it. We aren’t there yet, but we’re working toward an equitable aesthetic experience.”

“Access is not a checklist,” she continued. “It’s a relationship, a promise. It’s creative, generative, so it’s always growing.”