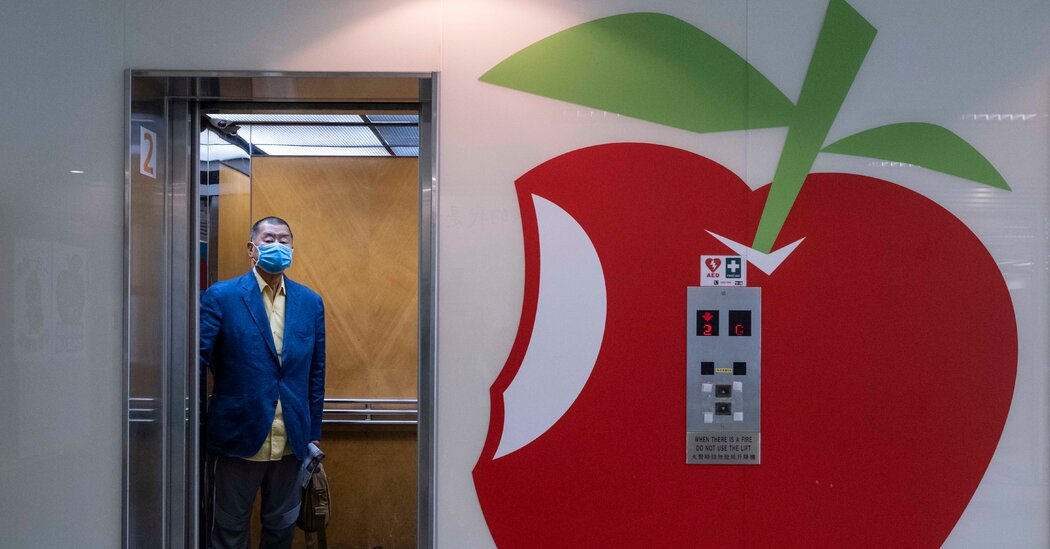 HONG KONG — Jimmy Lai, the founder of Hong Kong’s biggest pro-democracy newspaper, was denied bail on fraud charges on Thursday and ordered jailed until April by a court.

The detention of Mr. Lai, 72, came a day after three leading Hong Kong activists were sentenced to prison for participating in a protest last year, the latest blow to the territory’s pro-democracy movement.

The Chinese government imposed a sweeping national security law on Hong Kong at the end of June, and Mr. Lai became the law’s most high-profile target in August, when he was arrested along with his two sons and four executives of his media company, Next Digital.

But the new fraud charges are unrelated to the security law. Rather, they accuse Mr. Lai of violating the terms of the lease of Next Digital’s headquarters, the public broadcaster RTHK reported.

Two other Next Digital executives were charged with fraud but were granted bail on Thursday, RTHK said. Shares of Next Digital were suspended from trading on Thursday morning pending an announcement from the company.

Lawyers for Mr. Lai will appeal the bail ruling, a process that will take at least eight days, said Mark Simon, an aide to Mr. Lai.

Mr. Lai and his newspaper have been vocal supporters of Hong Kong’s pro-democracy protests, and they have been among Beijing’s biggest targets as it has moved to quash dissent in the territory.

In addition to Apple Daily, several other Hong Kong news outlets have come under pressure in recent months. A reporter for RTHK who investigated the police was arrested last month over her use of a database of license plates.

And i-Cable, the biggest pay television operator, said this week that it was laying off more than 100 staff members. That group included about 40 journalists, including its entire investigative team known as News Lancet, according to local news reports.

The protests that roiled Hong Kong have largely quieted this year because of social distancing restrictions, aggressive police tactics and the new security law. More than two dozen people have been arrested under the law. Beijing authorized the removal of four pro-democracy lawmakers last month, which prompted the mass resignation of the pro-democracy camp from the Hong Kong legislature.

Ted Hui, one of the lawmakers who resigned in protest, said Thursday from Denmark that he planned to go into exile. Mr. Hui was a frequent presence at the front lines of protests, where he tried to mediate between the police and demonstrators. He faced several criminal charges in Hong Kong over the protests and was one of eight lawmakers arrested last month over a chaotic meeting in May.

“From when the evil national security law took effect until I left the legislature recently, I asked myself at every moment — what can I still do in Hong Kong?” he wrote on Facebook. “I have struggled, hoping to resist in the streets like last year, regardless of criminal liability. I have also tried to stay in a languishing parliament and use what platform I have left to contend with tyranny.”

He wrote that he realized that the only option left open for him was to work from abroad for the cause of Hong Kong’s democracy. Mr. Hui said in a statement to reporters that he planned to soon travel to Britain.