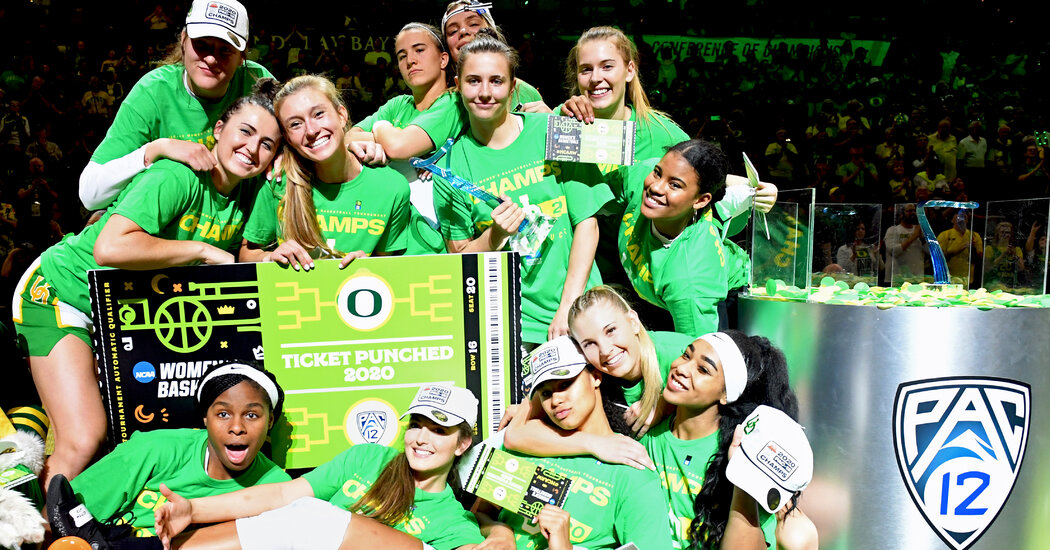 The case — near others that contain Nike team sneakers and signed basketballs, among other memorabilia — has room for a trophy but only a small white platform inside, with a team photo on one side and the slogan “Unfinished Business” on another with a summary of the season. Ionescu, who was selected first over all by the Liberty in the W.N.B.A. draft, used the motto before the start of her senior season and it took on new meaning once the tournament was canceled, which the summary said ended “possibly the greatest season in program history.”

Said Graves: “It’s something that we will keep blank until one day we are fortunate enough to win a national championship.”

That feeling of missed opportunity is an undercurrent for some teams as college basketball returns for a new season, a beginning that is already rife with problems that have led to coaches openly questioning the wisdom of playing with the virus surging around the United States.

“It was really difficult for the returners to let go of last season. It took a long time, it was a big transition,” Oregon forward Erin Boley said after scoring 25 points and grabbing nine rebounds against Portland on Monday. “We are so excited to have this new team, and it’s a great opportunity for us to create something special.”

Luka Garza, the star center for the Iowa men’s basketball team, said many teams feel similarly because there was no closure on the court in the spring.

“We worked so hard to put ourselves in a position to make the N.C.A.A. tournament and possibly make a run in the Big Ten tournament,” Garza said after scoring 41 points against Southern on Friday. He added: “In the off-season, I just went into the gym and started working out again. It hit me later, like a month later, that the season was finally over and I took a break.”

Dayton could have had a top seed in the N.C.A.A. men’s tournament last season and was primed for a deep run with Obi Toppin, the consensus national player of the year who was drafted by the Knicks last month. Dayton’s coach, Anthony Grant, said he has been telling his players to “be where your feet are” and not focus on last year, even though it’s easy to speculate.

Grant’s approach makes sense in a sport where much changes season to season and this team’s goals are its own. The same rings true for the Oregon women, even as this season carries its own uncertainty as the coronavirus cases increase.

“Everyone that gets recruited here is a winner here, I don’t think that changes,” said Oregon guard Taylor Chavez, who won the Pac-12 Conference’s Sixth Player of the Year Award last season. “The path to that will look different, but the goal is to win as many games as you can and have fun doing it. Nothing has changed with the goals.”

Those ambitions are clearly visible at Oregon’s practice courts, where signs on the walls have empty spaces for future accomplishments and a listing of N.C.A.A. tournament appearances include an interesting notation: “2020.” When the N.C.A.A. tournaments were canceled, there were no official brackets released (though Oregon certainly would have earned a No. 1 seed and automatically qualified for the women’s tournament because it had won the Pac-12 final).

Outside expectations for Oregon have lowered somewhat this season, with three teams in the Pac-12 ranked ahead of the Ducks in The Associated Press Top 25 poll. Besides losing Ionescu, who in April won the John R. Wooden Award as college basketball’s best player for the second straight season and finished as the N.C.A.A. leader in triple-doubles, Oregon also said farewell to Satou Sabally, who was drafted No. 2 over all by the Dallas Wings, and Ruthy Hebard, who went No. 8 to the Chicago Sky.

This season, the team is built around the game-altering presence of Sedona Prince, who is 6-foot-7 and was not able to play last year after the N.C.A.A. denied her a waiver so she could play right away after transferring from Texas. (Fans made T-shirts to support her, but she could not sell them, and she sued the N.C.A.A. to challenge its amateurism rules, saying they stopped her from earning money to pay more than $22,000 in medical bills. The lawsuit is pending.)

“I have such a greater purpose to play basketball now. I’m excited, it’s fun,” Prince said. “Sitting on the bench with that team, last year’s team, is something I’ll never be able to explain. I wish I would have played, but it did help me a lot.”

Graves said it has been tougher to help build a tight bond without certain activities like team meals during the pandemic. The harsh memories of last season, he said, should be used as a reminder that “you never know” what can happen, with injuries or other circumstances.

“You have to appreciate every movement. You have to love your teammates each and every day,” Graves said. “Get the best of what you have each day because tomorrow is not guaranteed to you. And we try to live by that.”