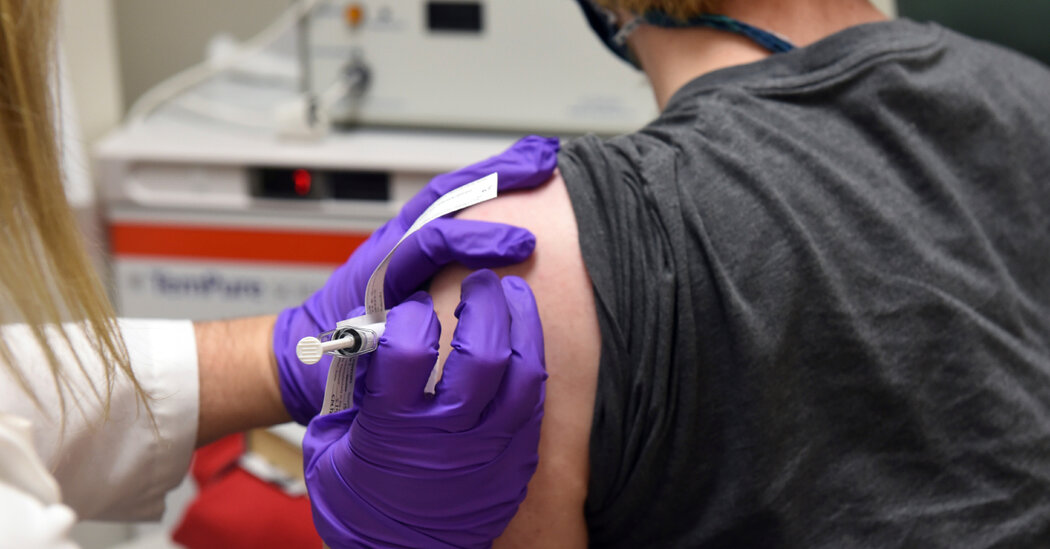 LONDON — British and American officials sparred on Thursday over how Britain had beaten the United States to authorizing a coronavirus vaccine, a debate touching on politics and regulatory styles that has heated up as wealthy countries vie to receive the first shipments of vaccines.

In Britain, the euphoria of winning the global race to authorizing the Pfizer-BioNTech vaccine was quickly giving way to a more sober realization of the choices facing the country’s National Health Service as it tries to deliver the first doses into people’s arms by Monday.

Nursing home residents, who had been named the government’s top priority, have fallen down the list. Doctors and nurses were expecting to be vaccinated first, but those plans appeared to be in flux. Meanwhile, the government pleaded with people not to call hospitals, asking for a shot.

The question of whether Britain had authorized a vaccine in haste on Wednesday, or the United States was wasting valuable time as the virus was killing about 1,500 Americans a day, has divided scientists and has also drawn in politicians. Facing criticism from American and European regulators, British officials boasted of the decision on Thursday, with one lawmaker suggesting the Europeans were “a bit sniffy” and others misleadingly crediting Brexit.

Those remarks drew eye rolls from British scientists, but also provoked more serious concerns that any chest-beating by government ministers risked undermining the public’s faith in a vaccine.

Dr. Anthony Fauci, the director of the U.S. National Institute of Allergy and Infectious Diseases, said that British regulators had not scrutinized data from clinical trials as carefully as their American counterparts in the Food and Drug Administration.

“We have the gold standard of a regulatory approach with the F.D.A.,” Dr. Fauci said in an interview on Fox News. “The U.K. did not do it as carefully and they got a couple of days ahead.”

Approval could come as early as next week from the F.D.A., and at the end of the month from European Union regulators.

Pro-Brexit lawmakers in Britain have incorrectly cast Britain’s split with the European Union as the reason it authorized a vaccine first. In fact, Britain remains under the bloc’s regulatory umbrella until Dec. 31 when it comes to drug and vaccine approvals, but was able to move more quickly because of European regulations enabling countries to act independently in public health emergencies.

While as a political matter, Brexit may have made it easier for Britain to authorize the vaccine early, analysts said, the divorce has made the job of its medical regulators more difficult in other ways.

And the flag-waving of pro-Brexit lawmakers was doing little to engender public trust in vaccines, scientists said.

“Vaccine nationalism has no place in Covid or other public health matters of global significance,” said Jeremy Farrar, the director of the Wellcome Trust and a scientific adviser to the British government. “Science has always been the exit strategy from this horrendous pandemic — that science has been global.”

With the first inoculations just a few days away, Britons were parsing the government’s shifting and sometimes vague statements about who would get the vaccine and when.

A government advisory committee had recommended that nursing home residents and workers be first in line for the vaccine, to prevent suffering and deaths among the most vulnerable and to protect the country’s overburdened hospitals as they deal with a second wave of infections. More than a quarter of coronavirus deaths in England and Wales have happened in nursing homes.

But Prime Minister Boris Johnson said this week that the Pfizer vaccine, owing to its ultracold storage needs, would only be administered in hospitals for the time being, ruling out nursing home residents as the first recipients.

“We’re all sat in this sort of limbo of, ‘Are we getting it? Aren’t we getting it?’” said Adam Purnell, an administrator at Kepplegate, a small nursing home in northwestern England.

“It just breaks my heart the stories I am hearing of not being able to see their loved ones,” he added. “To have another promise crumble underneath them is quite insensitive to those people that live in care homes and their relatives.”

Roughly 800,000 doses of the Pfizer vaccine, developed with BioNTech, a German company, were being packaged at the company’s Belgian manufacturing plant this week for shipment to Britain. How and when they will arrive was being kept secret for security reasons, the company said, though the BBC reported on Thursday that some of the doses were being transported through the Eurotunnel between France and Britain

Pfizer sought to shut down questions this week about whether people in Britain would be able to pay to cut the line for inoculation, which requires two doses, given a month apart.

“I can say clearly and confidently that there are no plans to supply the private sector for the foreseeable future — no chance at all,” Ben Osborn, Pfizer’s Britain country manager, said on Wednesday, adding that for the sake of equity, the public National Health Service would decide whom to vaccinate.

And despite the predictions of some analysts that a black market in vaccines was inevitable, Mr. Osborn insisted that people trying to sell the shot without authorization would not be able to divert doses from its supply chain.

As for the National Health Service’s plans, hospitals had been sending internal emails in recent days outlining plans for scheduling shots for doctors and nurses. A government advisory committee has suggested that older or more vulnerable health workers, and doctors and nurses who work with fragile patients, would be among the first in line.

The logistics of moving, defrosting and preparing the vaccine were so complicated, the government said, that it would only be given at 50 British hospitals to begin with.

But by Thursday, there were indications that before health workers were vaccinated, the government wanted to offer shots to nursing home workers and people age 80 and over who were already coming to hospitals for other reasons. It still appeared likely that doctors and nurses would be among those receiving vaccines in the coming weeks.

Sally Gilbert, an anesthetic technician who has been working on the coronavirus ward at a hospital in Hull, in northeast England, said she was relieved to hear of a vaccine being authorized.

“I hope this helps us get back to some kind of normality,” she said, “whatever that is.”

Though details were scarce about how vaccinations would work at her hospital, she said she had received an email suggesting that staff members could begin getting shots on Monday.