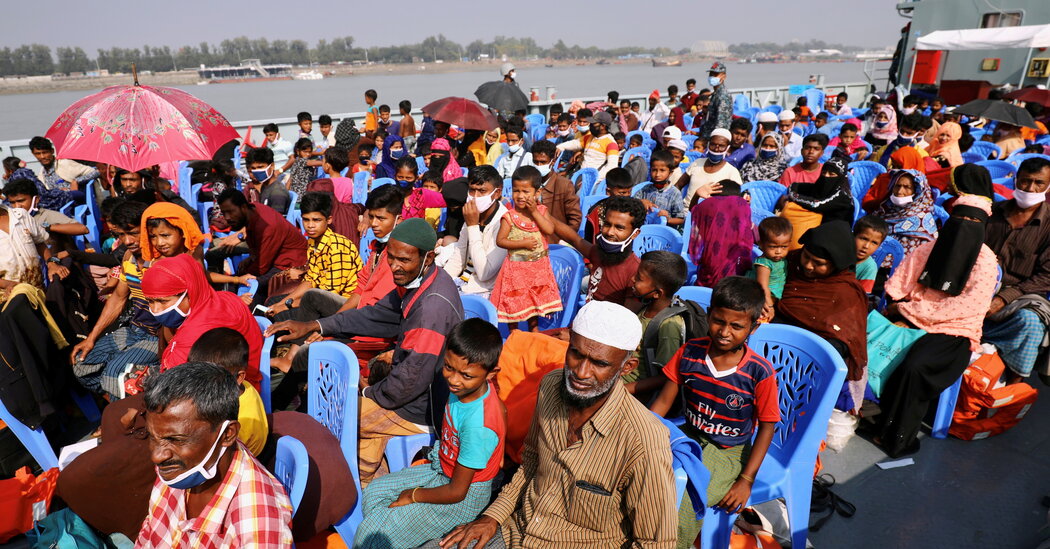 The clump of silt in the Bay of Bengal could be inundated by a single strike from a cyclone. Before this year, no one lived there.

But on Friday afternoon, seven Bangladeshi naval boats carrying more than 1,640 Rohingya Muslims landed on the low-slung island of Bhasan Char, as part of the Bangladeshi government’s plan to ease crowding in refugee camps where more than a million Rohingya have lived since fleeing systemic persecution and violence in Myanmar.

Rights groups have decried the resettlement, saying that the Rohingya, yet again, were being forced to move against their will.

“The relocation of so many Rohingya refugees to a remote island, which is still off limits to everyone including rights groups and journalists without prior permission, poses grave concerns about independent human rights monitoring,” Saad Hammadi, a South Asia campaigner for Amnesty International, said on Twitter.

Amnesty said it had spoken with several Rohingya who felt compelled to sign up for the relocation, rather than truly wanting to go.

The Bangladeshi government has said that it plans to move 100,000 Rohingya to Bhasan Char, which means “floating island” in Bengali. The estuary landmass appears to have taken shape from silt in the 1980s and 1990s; dredging carried out by a Chinese company, among others, was intended to make it fit for habitation and to stop high tide from flooding it.

In the Rohingya refugee camps, which are spread out near Bangladesh’s border with Myanmar, some residents said that people destined for the isolated island had displayed mixed emotions.

“Some are going happily and some are seen crying,” said Abdur Rahim, a camp leader.

Another camp leader, Entetullah, said that one family from his camp block was among those heading to Bhasan Char on Friday.

“I can tell you, no one was forced to leave,” Mr. Entetullah said. “They are going voluntarily.”

Others said they were given no choice but to move.

Bangladesh has shown remarkable generosity in accepting so many refugees from Myanmar, where the Rohingya minority faced a military campaign of executions and village burnings so brutally planned and executed that United Nations officials have said that it was carried out with genocidal intent.

As the flow of Rohingya intensified in 2017, the coast near the Bangladeshi city of Cox’s Bazar was taken over by refugee settlements. Vast encampments of tents replaced orchards and forests.

The overcrowding caused fatal landslides and flooding, as well as occasional rampaging by elephants unaware that their paths to the river now went through a tarpaulin city. Gun battles have broken out in the camps as different factions fought over limited resources.

With few economic opportunities available, some Rohingya have paid smugglers to send their daughters to become child brides in Malaysia, risking a perilous sea voyage. Over the years, hundreds of Rohingya have died at sea.

In May, hundreds of passengers on one such boat, which had gotten stuck at sea because it was unable to land in Malaysia, returned to Bangladesh. The dead had been thrown overboard. Survivors were taken to Bhasan Char and have been forced to live there since.

Some of the refugees heading to Bhasan Char on Friday — a boat journey of more than two hours — said they had been lured by promises of big houses and fancy facilities.

On Friday, the Bangladeshi Ministry of Foreign Affairs said that the government had spent $350 million refurbishing Bhasan Char with “all modern amenities, year-round fresh water, beautiful lake and proper infrastructure.” The buildings’ concrete foundations were better able to withstand natural disasters than the makeshift structures near Cox’s Bazar, the ministry said.

But refugees already on the island have described living in shared barracks with barely enough space to stretch out. Medical facilities are scant, they said. Outside, storm surges threatened, in a country that is regularly battered by cyclones.

Last month, representatives from international human rights groups, including Refugees International, made public a letter they had sent to the Bangladeshi foreign secretary, pleading for unfettered humanitarian access to Bhasan Char, as well as the opportunity for a full United Nations assessment of the area.

The requests were not granted.