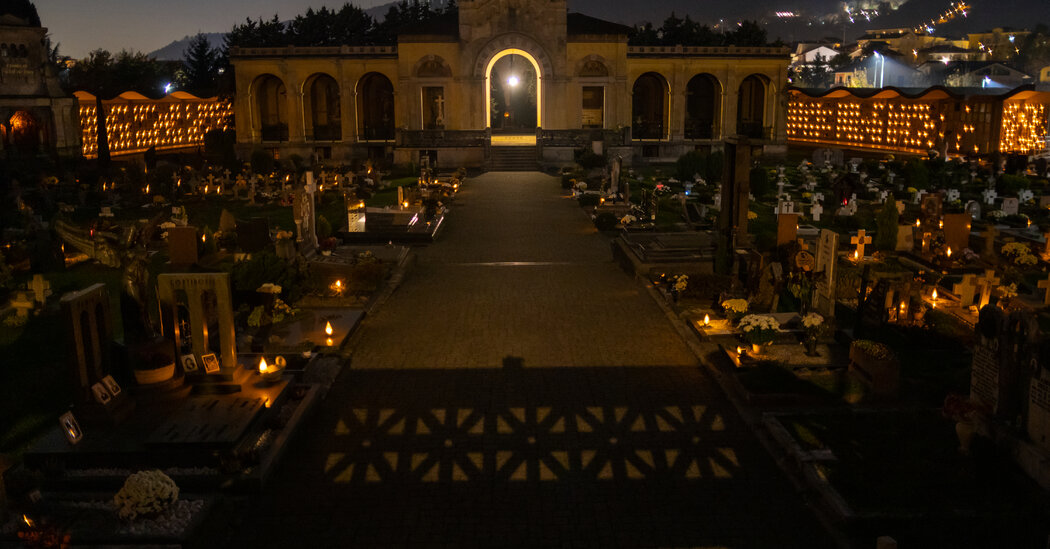 NEMBRO, Italy — Every Monday night in the northern Italian town that had perhaps the highest coronavirus death rate in all of Europe, a psychologist specializing in post-traumatic stress leads group therapy sessions in the local church.

“She has treated survivors of war,” the Rev. Matteo Cella, the parish priest of the town, Nembro, in Bergamo province, said of the psychologist. “She says the dynamic is the same.”

First the virus exploded in Bergamo. Then came the shell shock. The province that first gave the West a preview of the horrors to come — oxygen-starved grandparents, teeming hospitals and convoys of coffins rolling down sealed-off streets — now serves as a disturbing postcard from the post-traumatic aftermath.

In small towns where many know one another, there is apprehension about other people, but also survivor’s guilt, anger, second thoughts about fateful decisions and nightmares about dying wishes unfulfilled. There is a pervasive anxiety that, with the virus surging anew, Bergamo’s enormous sacrifice will soon recede into history, that its towns will be forgotten battlefields from the great first wave, that its dead will become engraved names on another rusted plaque.

And most of all there is a collective grappling to understand how the virus has changed people. Not just their antibodies, but their selves.

“It has closed me more,” Monia Cagnoni, 41, who lost her mother to the virus and then developed pneumonia, said as she sat apart from her father and sister on the stairs of their family home. “I want to be more alone.”

Her sister, Cinzia, 44, who prepared coffee and cake in the kitchen, had the opposite impulse.

Bergamo, like everywhere, now confronts a second wave of the virus. But its sacrifice has left it better prepared than most places, as the widespread infection rate of the first wave has conferred a measure of immunity for many, doctors say. And its medical staff, by now drilled in the virus’s awful protocols, are taking in patients from outside the province to alleviate the burdens on overwhelmed hospitals nearby.

Talking about these things does not come easily to people in Italy’s industrial heartland, jammed with metal-mechanic and textile factories, paper mills, billowing smokestacks and gaping warehouses. They prefer to talk about how much they work. Almost apologetically they reveal that they are hurting.

In the town of Osio Sopra, Sara Cagliani, 30, can’t get over her failure to fulfill her father’s dying wish.

A sign on her home’s gate reads, “Here lives an Alpine soldier.” When the coronavirus crisis began, her father, Alberto Cagliani, 67, offered his help, telling his daughter, “‘Remember, I’m an Alpine soldier, and we show up in an emergency.’”

After retiring as a truck driver, he had volunteered for a funeral home, driving around the province, retrieving the bodies of men killed in auto accidents and dressing them in suits given by their families. In February, he volunteered again, but this time the body count was overwhelming.

He became taciturn and stopped coming home to eat. “A slaughter without end,” he told his daughter. On March 13, after tending to another victim, he felt a pain in his right shoulder that spread to his lower back. His voice weakened. The sound of the television bothered him. On March 21, his wife saw him touching the bathroom towels just to see if he could feel them. His fingertips had gone numb. His legs followed. He died of Covid the next day with water in his lungs.

His last wish was to be buried in his Alpine soldier’s uniform, and his daughter sought to honor that, sending the green jacket and pants to the funeral home. The morticians sent them back, explaining that the fear of contagion made dressing bodies impossible.

“To put him in a sack, this is my greatest regret,” Ms. Cagliani said through tears, adding that she had started seeing a psychologist and that the tragedy had changed many in her close-knit town.

“People are scared to see one another,” she said. “There is a lack of affection, of touching and holding.”

Others are haunted by the horrible choices the virus forced them to make.

In the middle of March, Laura Soliveri began taking care of her mother who had developed Covid symptoms in the Bergamo town of Brignano Gera d’Adda. The doctors told her they didn’t have masks and would not come check on her. Her brother, a pharmacist, warned her not to allow their mother to be taken by an ambulance or be brought to a hospital, because the family would never see her again.

Ms. Soliveri, a 58-year-old grade-school teacher, scoured the area for available oxygen tanks to slake her gasping mother’s thirst for air. Finally they found her one. Her mother improved.

Then Ms. Soliveri’s husband, Gianni Pala, got the virus, too.

She and her family scrambled to find more oxygen, this time for him. They couldn’t take it away from her mother. His condition deteriorated and he required hospitalization. He died, age 64, on April 5. Her mother, 85, survived.

“My mother had the oxygen but we couldn’t take it from her to give to him,” said Ms. Soliveri, who has also started seeing a therapist and taking antidepressants and fiddling with her husband’s wedding ring, which she now wears on her middle finger. “I would have done it.”

The virus has tested some people’s faith — Ms. Soliveri has said she had lost her ability to pray — and fortified it in others.

Over the summer, Raffaella Mezzetti, 48, a volunteer for the Catholic charity Caritas, said the church had become a balm for the traumatized. But she said she still got chills when she heard the jingles of the ads that were on TV at the time. The sirens of ambulances, which she said were maybe bringing women to the hospital to give birth, made her nervous. “It sticks with you,” she said.

On the Day of the Dead in Nembro, a volunteer pressed sanitizer onto the hands of hundreds of bereaved entering the cemetery to listen to Father Cella.

Delia Morotti, 57, who contracted the virus herself, left the Mass early. She said hearing the names of all the dead infuriated her. Both her parents were among them.

“They didn’t deserve this. First my father died. And then my mother,” she said. “I’ve been seeing a psychologist for months.”

Others have found more self-destructive ways to cope.

Doctors at the Pesenti Fenaroli hospital, which served as a critical incubator for the contagion, said they had seen a spike in patients for substance abuse issues. Around the province, psychologists have reported a rise in anxiety and depression.

The nurses taking care of those patients and the province’s other sick are no longer the objects of outpourings of affection.

“It’s not like it used to be,” said Katia Marcassoli, a nurse at Pesenti Fenaroli. People had stopped calling the nurses to express solidarity and to ask how they were coping. Instead patients called with anger about their appointments canceled for other procedures. “There’s a lot of anger.”

The medical crisis delayed Giovanni Cagnoni from getting his stomach pains checked out. When doctors properly examined him, they discovered he had a rare cancer, liposarcoma, concentrated around his kidneys. By the time he got a surgery date, in August, it had metastasized and was no longer operable.

“The hospitals weren’t taking anyone,” he said in his home in Gazzaniga, where he sat in front of a fire with his two daughters.

The Cagnoni family had already been through an inferno, the minutiae of which the 76-year-old former military police commander punctiliously noted in a green notebook titled “Chronicle of Covid-19.”

On March 8, his wife, Maddalena Peracchi, felt a chill on a walk. Over the next 11 days, he registered her fevers (99.32, 97.7, 100.4) and then on March 19 her condition plummeted and a team of ambulance workers in hazmat suits entered their home and took her away.

On March 20, her brother called to encourage them “and died that evening.”

On March 29, Mr. Cagnoni noted “Daylight Saving Time” and that doctors had called to tell him his wife’s time had all but expired. March 30 was “interminable,” he wrote, and he received no news. On March 31, he called the hospital and learned his wife had died the night before.

“They forgot to call us,” the blue script reads. On April 11, as his daughter Monia recovered from the virus, Mr. Cagnoni’s diary noted his first stomachache.

So many families had lost relatives that when Bergamo came out of the monthslong lockdown in the summer, many people discovered that their friends and neighbors had vanished. But there was also a palpable desire to move on.

Father Cella ran a summer camp. Children played in front of the sprinklers at Nembro’s town hall. And even as fear lurked in the air like poisonous droplets, people in the capital city of Bergamo tentatively ventured out.

In July in Piazza Pontida, where “We Are Bergamo” signs hung defiantly from the buildings, Roberta Pedretti, 52, went out for an aperitif with other nurses with whom she had become close during the trench warfare of the crisis.

She looked around at the people filling the bars and restaurants.

“Bergamo is trying to come back but it’s full of fear,” she said then. “It saw too many cadavers. It can’t be like before.”

In the autumn, cases exploded again, and in November a curfew snuffed out Bergamo’s flickers of social life.

The funicular railway and the winding staircase that led up to the medieval hilltop town were both deserted. The restaurants were closed. Patrol cars threw blue siren light on the stone walls as they monitored the streets for gatherings.

The “We Are Bergamo” signs had turned weather-beaten and torn.