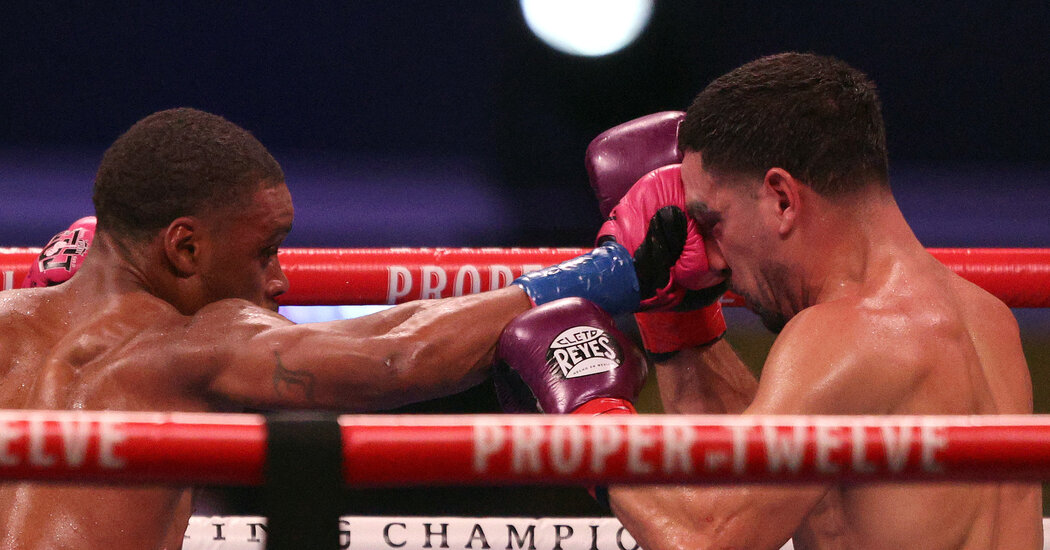 After turning his high-stakes bout with Danny Garcia into a 12-round boxing clinic, Errol Spence Jr., the undefeated welterweight, held a news conference that included reporters gathered at AT&T Stadium in Arlington, Texas, and others tuning in via Zoom.

Spence, who lives in the Dallas area and entered the bout as the W.B.C. and I.B.F. welterweight champion, had just won a unanimous decision over Garcia, a former world champion. Spence had depended heavily on his right jab, a basic but effective weapon against the counterpunching Garcia. And when asked why he employed that game plan, Spence replied in his deadpan drawl that common sense had dictated the strategy.

“I was the taller person, he had the shorter arms,” said Spence, who is 27-0 with 21 knockouts. “I always had a great jab, so that’s what we was working on.”

Common sense also suggests that Spence and Terence Crawford, who holds the W.B.O. title, would face each other next.

Their schedules align: Crawford last fought on Nov. 14, steamrollering Kell Brook of England in four rounds to retain his title, and, like Spence, he has nothing lined up for early 2021.

Their résumés line up as well. Both are undefeated titleholders at welterweight in search of a career-defining win. And they are the class of a talent-rich 147-pound division, versatile boxers and punchers who are equally comfortable in a chess match or in a brawl.

But Spence, managed by Al Haymon, fights under the Premier Boxing Champions banner, while Crawford, who watched Spence’s win from ringside, is under contract to Top Rank, a rival outfit run by Bob Arum. Pairing the fighters means bridging a stubborn divide. It’s not impossible — witness February’s heavyweight fight between Deontay Wilder and Tyson Fury — but it’s also not guaranteed.

When asked about a Crawford fight, Spence told reporters that Haymon made those decisions.

“I’m not worried about Terence Crawford,” Spence told reporters. “I’m going to enjoy my time with my kids and just chill out and reflect on this last year and a half.”

Spence’s win over Garcia (36-3, 21 knockouts), and the ambiguity surrounding his next move, is unfolding in the shadow of an exhibition bout between the retired 50-something fighters Mike Tyson and Roy Jones Jr., an event on Nov. 28 that attracted mainstream press attention and heavy social media engagement and that generated 1.2 million pay-per-view buys.

That a novelty bout between fighters with a combined age of 105 could sell so many pay-per-views could raise questions about the boxing industry’s overall health. Spence and Garcia probably did not approach one million pay-per-view buys, a troubling signal for conventional, competitive bouts.

But less than a week after Tyson-Jones, the rapper Snoop Dogg, who performed and did commentary during that broadcast, announced he intended to start a televised boxing series in 2021. That kind of move suggests the market for serious bouts is not dying, and that it might even be underserved.

If Tyson-Jones was the spectacle fight that sports fans did not realize they wanted until it happened, Spence-Crawford could be the fight avid boxing fans want but fear they may never see.

This type of uncertainty is unique to boxing — imagine delaying or skipping the Super Bowl because the A.F.C. and N.F.C.’s champions could not agree on a venue or a revenue split. But for boxing aficionados, it’s a familiar frustration. Floyd Mayweather Jr. and Manny Pacquiao never fought until 2015, six years after their pairing was first discussed. In the 1990s, Riddick Bowe tossed his title belt in the trash rather than commit to a title unification bout with Lennox Lewis.

Crawford and Spence have squared off and talked trash in person, but on Saturday, Crawford’s social media feeds indicated he wasn’t impressed with Spence as a potential foe.

“Danny tired,” read the only Crawford tweet commenting on the action. Later, he posted a string of upside-down smiley face emojis, implying Spence’s performance underwhelmed him.

Spence dominated Garcia on Saturday night in his first bout since a fiery car crash in October 2019. Video from a security camera showed Spence’s Ferrari flipping several times after hitting a median at high speed. The impact ejected Spence from his car, and he suffered facial injuries.

He resumed light training in March and began heavier workouts this summer. On Saturday, he entered the ring facing questions about his strength and durability after the crash, and he answered emphatically. He spent most of the fight stalking Garcia behind a stiff right jab, and pounding him with lefts and rights to the body.

According to CompuBox, the scoring system, both fighters landed 103 power punches. But Spence landed 84 jabs, compared with 14 for Garcia.

Spence and Garcia headlined one of the few major fight cards to take place in front of a paid audience since the coronavirus pandemic shut down most sports in March. The previous such card, headlined by the lightweights Gervonta Davis and Leo Santa Cruz on Oct. 31, also was in Texas, in San Antonio.

“It’s crazy times right now in the world, and crazy times in sport,” Garcia said during a post-fight news conference. He added, “It’s a blessing to the fighters and the fans.”

Saturday’s event sold out all 16,102 available seats at AT&T Stadium, which can seat 80,000 and accommodate more through standing room. Spectators were required to wear masks, and most actually did so. The seating was also arranged to enhance social distancing.

These are some of the new normals in boxing, but the old normal includes uncertainty over where Spence will head after his big win. The posturing between the two camps still may, or may not, lead to a showdown, but fans will have to wait and see.

“#ManDown,” it read, referring to Spence’s slogan and the name of his promotional company.