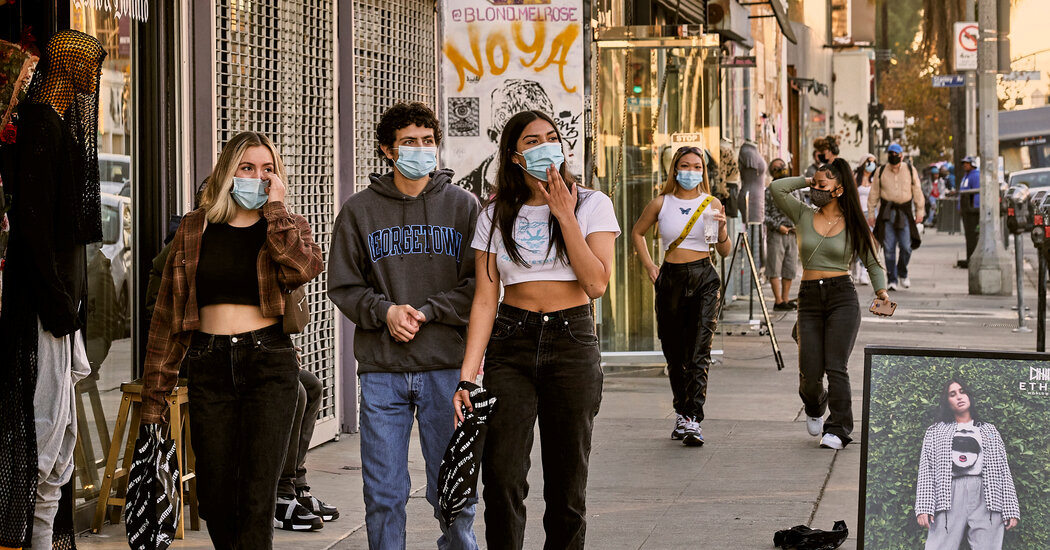 Much of California will be under stay-at-home orders as of late Sunday night — with outdoor dining and bars shuttered, schools closed and playgrounds roped off — as the state tries to control an accelerating coronavirus surge and head off a catastrophic shortage of intensive care beds.

Under orders issued Thursday by Gov. Gavin Newsom, regions are to be placed under the new restrictions once their intensive care unit availability falls below 15 percent. The governor has warned that without drastic action, hospitals will soon be overwhelmed.

On Saturday, two regions hit the I.C.U. threshold and learned that at 11:59 p.m. Sunday they would have to begin complying with the stay-at-home orders for at least three weeks: Southern California was at 12.5 percent, and the San Joaquin Valley at 8.6 percent. Together, the regions are home to more than half of California’s population of 40 million.

In the San Francisco Bay Area, local officials announced Friday that the region would adopt the new limits before hitting the threshold.

California’s new measures are its strictest since the beginning of the pandemic, when it became the first state to issue a stay-at-home order. That order helped the state gain control of an early outbreak, but daily case reports have tripled in the last month. More than 25,000 new cases were reported statewide on Saturday, the fourth straight single-day record. Los Angeles County, with more than 8,900 new cases, broke its record for the third straight day.

Nationally, the news is also grim. On Friday, more than 229,000 cases were reported and the seven-day rolling average of new cases passed 183,700, both records. More than 101,000 Americans are in hospitals now, double the number from just a month ago.

Much of California was already under a curfew prohibiting nearly all residents from leaving their homes to do nonessential work or to gather from 10 p.m. to 5 a.m.

The new order includes prohibitions on private gatherings and requires retail businesses to operate at a limited capacity. Any open businesses must require everyone inside to wear masks and distance themselves. Among the facilities that must close: hair salons and barbershops; museums, zoos, and aquariums; indoor movie theaters; wineries and breweries.

“We are at a point where surging cases and hospitalizations are not letting up,” Dr. Salvador Sandoval, a public health officer for the San Joaquin Valley city of Merced, told The Associated Press. “I can’t emphasize this enough — everyone must take personal steps to protect themselves and protect others.”

Many people are weary after nine months of shifting rules about where they can go, whether they can eat indoors or outdoors and whether their children can go to school. Questions remain about the level of compliance with the new restrictions and about how strictly they will be enforced.

Sheriff Don Barnes of Orange County said in a statement on Saturday that his deputies would not enforce them because compliance with health restrictions was “a matter of personal responsibility and not a matter of law enforcement.”

Mr. Newsom has emphasized that California will withhold funding from counties that refuse to enforce the new stay-at-home order. After some counties pushed back on prevention measures during a summer surge, the governor appointed an enforcement task force that through November has levied more than $2 million in fines against businesses, issued 179 citations and revoked three business licenses.

For residents, such as David White, a senior pastor at Porterville Church of God in the San Joaquin Valley city of Porterville, these new restrictions are a blow to residents who have taken the virus seriously from the start.

“We look back and think we’ve given up so much for so long, and in hindsight it was nothing,” he said. “Statistically, nothing compared to now.”