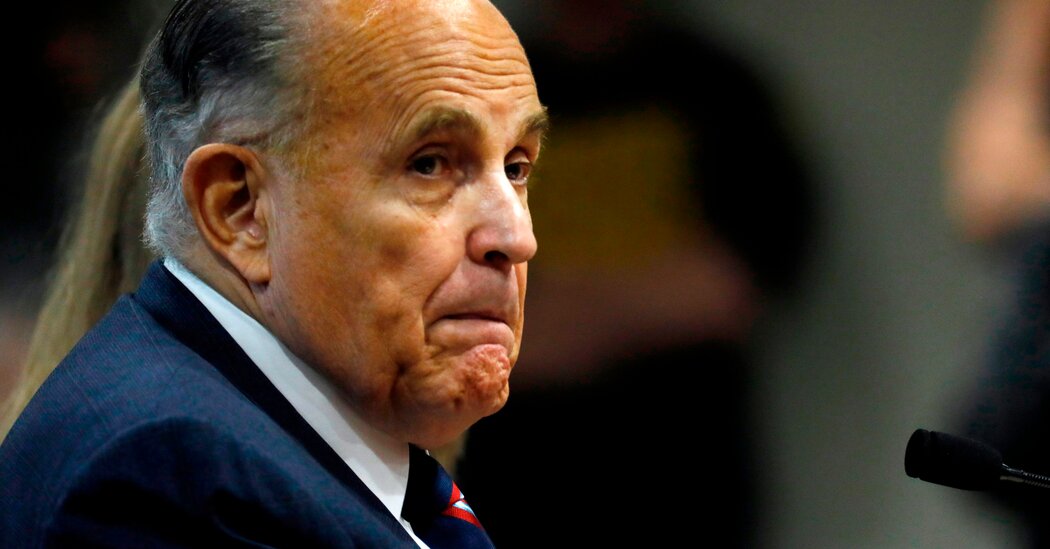 “@RudyGiuliani, by far the greatest mayor in the history of NYC, and who has been working tirelessly exposing the most corrupt election (by far!) in the history of the USA, has tested positive for the China Virus. Get better soon Rudy, we will carry on!!!” Mr. Trump wrote. It was unclear why Mr. Trump was the one announcing it.

Mr. Giuliani was at Georgetown University Medical Center, according to a person who was aware of his condition but not authorized to speak publicly. Mr. Giuliani, at age 76, is in the high-risk category for the virus.

His son, Andrew H. Giuliani, thanked people for checking in. “My Dad @RudyGiuliani is resting, getting great care and feeling well. Thank you to all the friends who have reached out concerned about his well being,” he wrote on Twitter. Andrew, who is a White House adviser, said on Nov. 20 he had tested positive for the virus. He had appeared at a news conference with his father the day prior.

Mr. Giuliani has repeatedly been exposed to the virus through contact with infected people, including during Mr. Trump’s preparation for his first debate against President-elect Joseph R. Biden Jr. in September, just before the president tested positive.

Mr. Giuliani has been acting as the lead lawyer for Mr. Trump’s efforts to overthrow the results of the election. He has repeatedly claimed he has evidence of widespread fraud, but he has declined to submit that evidence in legal cases he has filed.

His infection is the latest in a string of outbreaks among those in the president’s orbit. Boris Epshteyn, a member of the Trump campaign legal team, tested positive late last month. The same day, Mr. Giuliani attended a meeting of Republican state lawmakers in Pennsylvania about allegations of voting irregularities. One of the lawmakers at that meeting was notified shortly after while at the White House that he had tested positive.

Mark Meadows, the president’s chief of staff, and at least eight others in the White House and Mr. Trump’s circle, tested positive in the days before and after Election Day.

Mr. Trump was hospitalized on Oct. 2 after contracting the coronavirus. Kayleigh McEnany, the president’s press secretary, Corey Lewandowski, a campaign adviser, and Ben Carson, the housing secretary, are among those in the president’s circle who have tested positive this fall.

Mr. Giuliani appeared on Fox News earlier on Sunday. Speaking with the host Maria Bartiromo via satellite, Mr. Giuliani repeated baseless claims about fraud in Georgia and Wisconsin on “Sunday Morning Futures.” When asked if he believed Mr. Trump still had a path to victory, he said, “We do.”