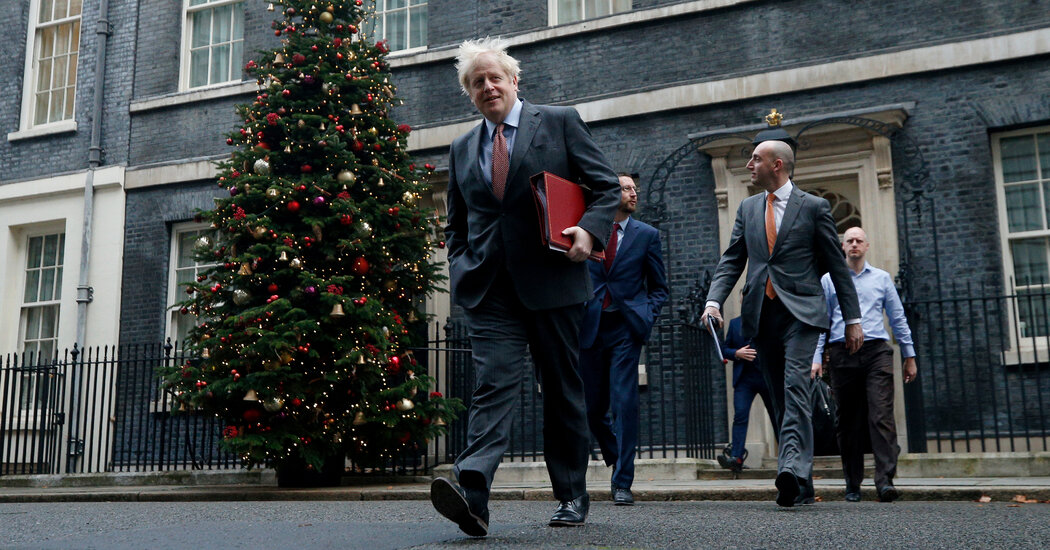 LONDON — For weeks, Prime Minister Boris Johnson of Britain has played an extreme version of hardball over Brexit, threatening to break international law and renege on a treaty he signed with the European Union if it fails to strike a new trade agreement with him soon.

On Tuesday, though, Mr. Johnson dropped that threat, raising hopes that a more diplomatic approach could yield a breakthrough in cliff-edge trade talks planned for Wednesday with Ursula von der Leyen, the president of the European Commission, the bloc’s executive body.

In a statement, Britain agreed to remove parts of legislation that would have allowed the government to override aspects of a landmark Brexit withdrawal agreement designed to avoid the creation of a hard border between Northern Ireland, which is part of the United Kingdom, and Ireland, which will remain a member of the European Union.

In doing so, Mr. Johnson resolved a problem he had made for himself through hard-line tactics seemingly designed to ratchet up pressure on European Union negotiators.

Instead, the moves managed to alienate just about every faction in the dispute, provoking a political backlash at home, stirring widespread anger in continental Europe and prompting President-elect Joseph R. Biden Jr. to warn Mr. Johnson not to do anything in trade negotiations that would threaten peace in Northern Ireland.

By setting up the contentious measures, the British government had hoped to give itself a freer hand in making trade decisions to ensure that goods could continue to flow between Britain and Northern Ireland in the absence of a deal with the European Union.

Tuesday’s olive branch should please Mr. Biden and improve the atmosphere ahead of Mr. Johnson’s discussions Wednesday with Ms. von der Leyen that could shape Britain’s relations with its neighbors — as well as the terms of cross-Channel trade — for decades to come.

“Boris Johnson has solved a problem he created,” said David Henig, director of the U.K. Trade Policy Project at the European Center for International Political Economy, a research institute. “On balance, it is now more likely that there is a mood to go and strike a trade deal than not, even if it is too early to say that for sure.”

Under the Brexit withdrawal agreement negotiated last year, Britain formally left the European Union on Jan. 31 but remained part of its trading system until the end of this year.

While both sides want to reach and ratify a trade deal by then, time is short and wide gaps remain ahead of the critical talks between Mr. Johnson and Ms. von der Leyen over dinner in Brussels on Wednesday evening.

On Thursday, the European Union’s leaders are scheduled to meet in Brussels for a summit, and the timing of Mr. Johnson’s visit there suggests that a Brexit endgame is finally approaching.

At the dinner on Wednesday, Mr. Johnson will have an opportunity to take personal charge of the negotiations, raising them to a higher political level.

That does not mean that a deal is assured, however, and officials have sought to stress the scale of the differences between the two sides. On Tuesday, the European Union’s negotiator, Michel Barner, warned European ministers that a no-deal outcome was more likely than an agreement, Reuters reported.

Negotiators have spent months in fruitless discussion over the main questions that divide them, including fishing rights and the rules on state subsidies and fair competition between British and European companies, and the mechanisms to enforce them.

European Union leaders are reluctant to allow Brexit to intrude into their summit talks on Thursday, and are wary of any attempt by the British to exploit possible divisions within a bloc that has remained remarkably united over Brexit so far.

Both sides know that failure to strike a trade agreement is likely to come at significant economic cost and cause big disruption to cross-Channel trade.

However, Britain is likely to suffer more than any one European Union nation — with the possible exception of Ireland — and faces the risk of clogged ports, stranded trucks and supermarket shelves temporarily running out of some goods.

The concession made by Britain on Tuesday came after a separate set of talks in Brussels over the implementation of parts of the withdrawal agreement related to Northern Ireland.

A joint statement from the British and European sides said that, following agreement on minimizing checks and controls on goods crossing the Irish Sea into Northern Ireland, the contentious clauses in the internal market bill were no longer needed.

Significantly, Britain agreed to leave out the clauses, whether or not a wider trade deal is struck with the European Union. That such an agreement would simplify matters for those trading between Britain and Northern Ireland suggests that Mr. Johnson is serious about achieving one.

Ireland’s foreign affairs minister, Simon Coveney, welcomed the news and said he hoped that this would “provide some of the positive momentum necessary to instill confidence and trust, and allow progress in the wider context of the future relationship negotiations.”

However, Mr. Henig warned that when Mr. Johnson and Ms. von der Leyen meet, there is a risk that the British prime minister might overestimate his ability to win concessions from the bloc.

The question was what happens if Mr. Johnson fails to achieve what he hopes for in talks, or if the European Union decides it needs more time for negotiations, he said.

“There could still be a few more twists and turns,” Mr. Henig added.