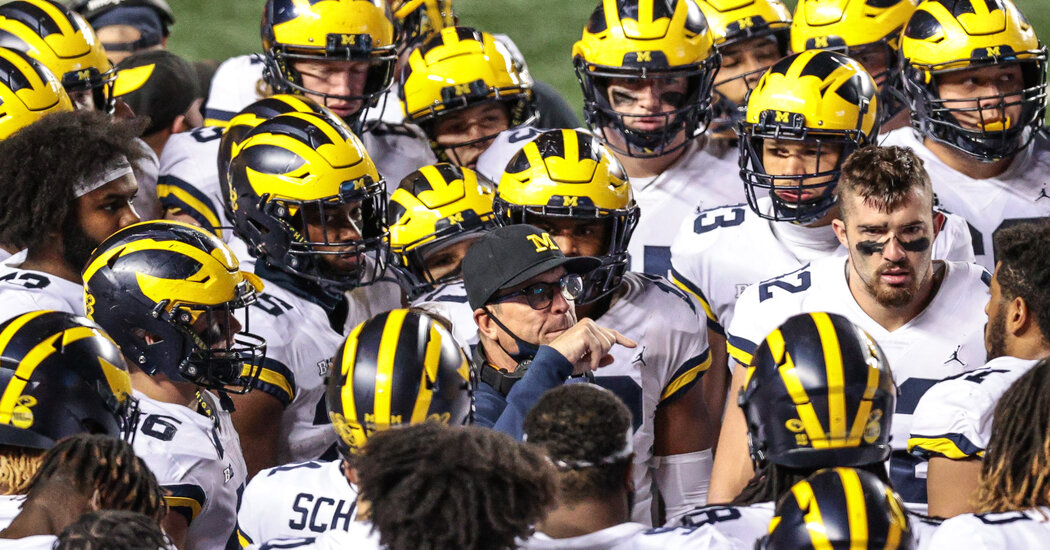 One of the most cherished rites of college football — the Michigan-Ohio State game, played annually for more than a century — is off for this weekend because of the coronavirus pandemic.

Michigan said Tuesday that it would be unable to play at fourth-ranked Ohio State on Saturday because of the number of virus cases inside its football program.

“The number of positive tests has continued to trend in an upward direction over the last seven days,” Warde Manuel, Michigan’s athletic director, said in a statement. “We have not been cleared to participate in practice at this time. Unfortunately, we will not be able to field a team due to Covid-19 positives and the associated quarantining required of close contact individuals.”

The cancellation raised the possibility that Ohio State (5-0) would prove ineligible for the Big Ten championship game on Dec. 19 because it had not played enough games this season — an outcome that could influence the Buckeyes’ prospects of reaching the College Football Playoff. But conference officials have said that the Big Ten policy that requires teams to play at least six games to qualify for the title matchup could be adjusted by the league’s athletic directors.

Ohio State struggled with the virus toward the end of November and canceled its Nov. 28 game at Illinois. The Buckeyes had earlier missed out on a game when Maryland canceled because of its own virus troubles.

At a news conference on Tuesday before Michigan announced the cancellation of this weekend’s contest, Ryan Day, Ohio State’s coach, predictably said the conference should consider changing the threshold to qualify for the Big Ten championship.

“There’s been a lot of changes, and I just think we have to take a hard look periodically at all of that stuff,” Day, who was among the people in the Ohio State program who tested positive for the virus last month. “I think this is one of those situations, and if we don’t quite get the games we need to get into the championship game, then I think that needs to be looked at hard, just like anybody else in the conference.”

He added, “But there’s no easy solution in times like this, so I know those guys are going to come together and take a hard look at it and make sure it was the right decision.”

No. 14 Northwestern (5-1) won the Big Ten West and the right to play in the championship game in Indianapolis. No. 12 Indiana (6-1) trails Ohio State in the Big Ten East, and its only loss was to the Buckeyes.