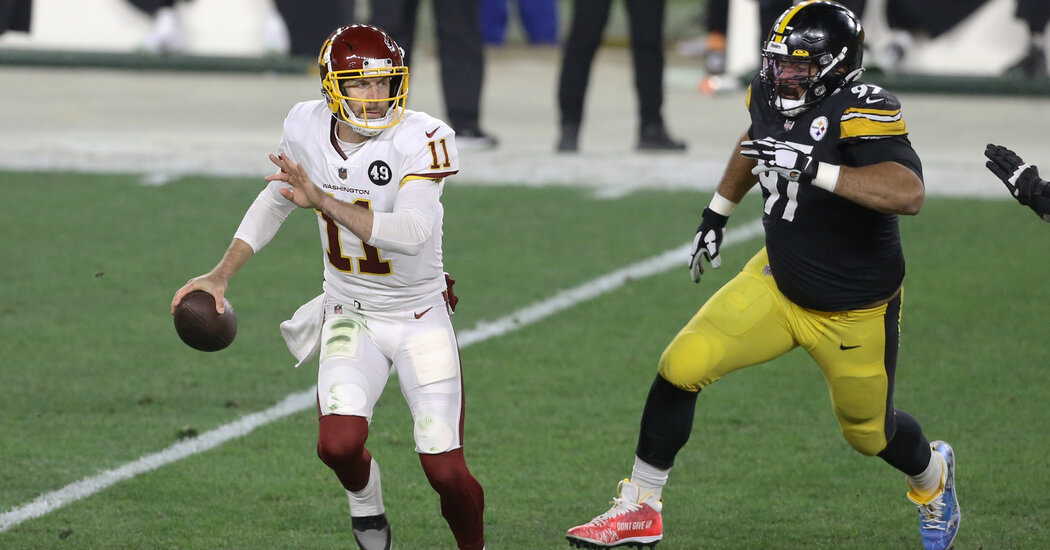 In another occupational hazard of a sport he loves but that imperiled his life, Washington quarterback Alex Smith was spiked by one of his offensive linemen on Monday night. Blood gushed from his leg. Not the leg that was nearly amputated in 2018, but the other one, the left one, and the blood soaked his sock, streaming onto the white tape encircling his cleat.

At the time, Washington trailed the unbeaten Pittsburgh Steelers by two touchdowns, though that deficit, much like Smith’s gash, looked worse than it actually was. By the end of the game, Washington had won, 23-17, a victory that recalled a set of Russian nesting dolls, with one comeback tucked inside another, inside another.

Smith never missed a snap — a trainer wrapped his wound on the field, then attended to it more thoroughly at halftime — and proceeded to lead Washington to scores on five of its next seven possessions, including its final three. Since elevating Smith to starter in Week 10, another remarkable milestone in the two-year timeline since he broke his right leg in two places during a 2018 game, Washington has gone 3-1, winning its last three to match the Giants’ 5-7 record atop the N.F.C. East.

Just a week ago, that division was on a pace to be historically pitiful — and it still might finish as such. But in this fragmented season that demands teams’ proficiency at adapting at a moment’s notice, it has become apparent that continuity in the N.F.L. is a treasured commodity. Washington and the Giants have each evolved under the direction of first-year coaches, and it has taken time for them to coalesce and develop an identity.

Under Joe Judge, the Giants have won their last four, and on Sunday they completed what, to that point, was the biggest upset of the season: defeating the mighty Seahawks in Seattle with the backup quarterback, Colt McCoy. Then came Monday, when Washington, after losing its primary running back, Antonio Gibson, to a toe injury, erased a 14-0 deficit on the road.

According to research conducted by the league, Washington’s victory was the first by a team with as bad a record as 4-7 against a team that had won at least its first 11 games.

“We talked about the biggest thing, more so than anything else, is your reputation, your record,” Coach Ron Rivera said afterward. “When you get on the field, those things don’t matter. What matters is who plays the best.”

That was not the Steelers, whose aura of invincibility has been fading even as their win total ballooned. Their poor performances in close victories made them vulnerable, and the same imperfections that have chased them all season — drops and a lack of a running game, namely — doomed Pittsburgh on Monday, when it once again played without its lead back, James Conner, who tested positive for the coronavirus last month.

Still, the Steelers remain atop the A.F.C., ahead of the Kansas City Chiefs, also 11-1, on tiebreakers. Though they must correct those flaws if they are to contend for the franchise’s seventh Super Bowl title, the Steelers are in little danger of missing the playoffs. Washington must nudge past the Giants, who own the head-to-head tiebreaker, but, as Rivera said after the game, it demonstrated on Monday that it had the potential to beat anyone.

“We have got to be able to make sure we understand that we’re capable of it,” Rivera said. “And I think it tells the other teams that, ‘Hey, we’re pretty good.’ We got some guys that can play.”

Washington is built on a stout defensive front, a balanced offense and a certain toughness embodied by Rivera, who learned that he has cancer in late August, seven months after he was hired to restore credibility (and playoff appearances) to a bedraggled franchise. He served as its voice while upheaval engulfed the organization, and fulfilled his coaching duties even as he underwent treatment that left him so weak he had trouble standing during games.

While Rivera set about molding the team, a turbulent off-season damaged Washington’s reputation. Its melodramas have not been resolved. Most visibly, the team’s owner, Dan Snyder, in July succumbed to pressure to get rid of the team’s 87-year-old name and logo, which were viewed by many as racist, after sponsors revolted. A month later, an independent law firm began its investigation into accusations of sexual harassment made by 15 women who had worked for the organization. That investigation was started by Snyder, but later taken over by the N.F.L.

The organizational tumult has continued into the season, with a power struggle between Snyder and partial owners over control of the team. Just this week, the league’s investigation into the team’s workplace uncovered a confidential settlement from a decade ago, according to The Washington Post.

The team began the season with a second-year quarterback, Dwayne Haskins, as the starter, then shifted to Kyle Allen, who played for Rivera at Carolina and dislocated his ankle in Week 9, creating an opportunity for Smith.

After recovering from a gruesome compound fracture that endangered his leg, Smith did not have to play a single down this season to be considered a favorite to be the league’s comeback player of the year. But across the last four games, he has stabilized Washington with reliable play and stellar ball security — just two turnovers — to vault the team into contention. In this season of all seasons, a postseason berth for these players, this coach and especially this quarterback, would be a coda worthy of another nesting doll.

“Each and every week, I’m making the most of it, living like it’s my last and enjoying that mind-set,” Smith said. “I’m not looking beyond literally that next start and trying to take advantage of it with everything I got and enjoy it.”