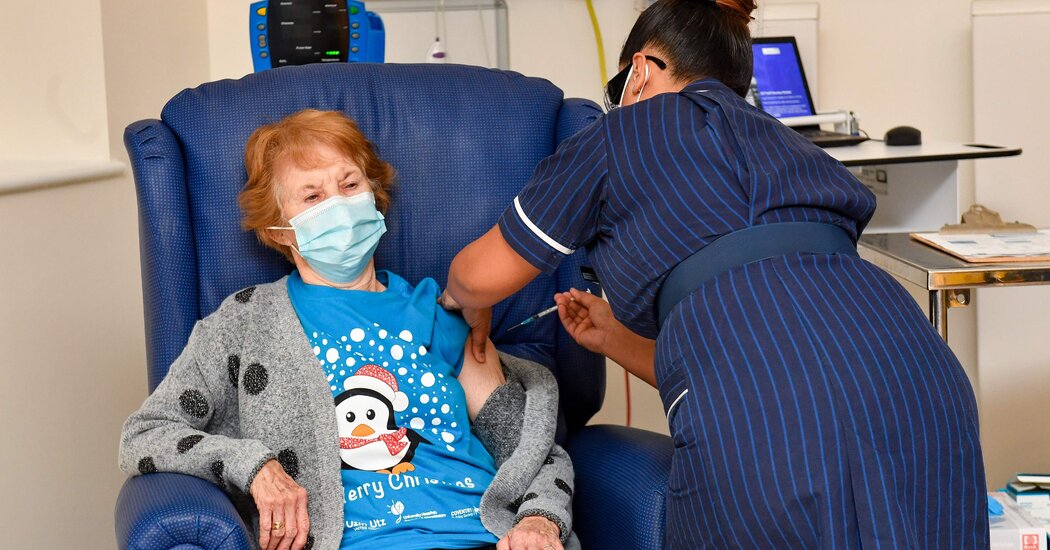 Good morning. Britain has begun vaccinations. But that matters less in the short term than you may think.

But there is still one dark cloud hanging over the vaccines that many people don’t yet understand.

The vaccines will be much less effective at preventing death and illness in 2021 if they are introduced into a population where the coronavirus is raging — as is now the case in the U.S. That’s the central argument of a new paper in the journal Health Affairs. (One of the authors is Dr. Rochelle Walensky of Massachusetts General Hospital, whom President-elect Joe Biden has chosen to run the Centers for Disease Control and Prevention.)

An analogy may be helpful here. A vaccine is like a fire hose. A vaccine that’s 95 percent effective, as Moderna’s and Pfizer’s versions appear to be, is a powerful fire hose. But the size of a fire is still a bigger determinant of how much destruction occurs.

I asked the authors of the Health Affairs study to put their findings into terms that we nonscientists could understand, and they were kind enough to do so. The estimates are fairly stunning:

It’s worth pausing for a moment on this comparison, because it’s deeply counterintuitive. If the U.S. had maintained its infection rate from September and Moderna and Pfizer had announced this fall that their vaccines were only 50 percent effective, a lot of people would have freaked out.

But the reality we have is actually worse.

How could this be? No vaccine can eliminate a pandemic immediately, just as no fire hose can put out a forest fire. While the vaccine is being distributed, the virus continues to do damage. “Bluntly stated, we’ll get out of this pandemic faster if we give the vaccine less work to do,” A. David Paltiel, one of the Health Affairs authors and a professor at the Yale School of Public Health, told me.

There is one positive way to look at this: Measures that reduce the virus’s spread — like mask-wearing, social distancing and rapid-result testing — can still have profound consequences. They can save more than 100,000 lives in coming months.

The social life of forests: Do trees communicate and cooperate with one another? It appears so. Read the story in the Magazine, or listen to it on a special episode of “The Daily.”

A debate: One former head of Medicare calls Xavier Becerra “a great fit” to lead the Department of Health and Human Services, The Washington Post reports. In his Times Opinion column, Ross Douthat says the nomination is a warning sign that Biden will abandon the moderate approach that offers his best chance for political success.

Lives Lived: As a pro wrestler, Pat Patterson knew how to delight fans. As an executive of World Wrestling Entertainment, he introduced the Royal Rumble, a last-man-standing free-for-all that has been popular ever since. When he announced in 2014 that he was gay, Patterson’s fans remained loyal. He died at 79.

The Rights They Are A-Sold

Bob Dylan has sold his catalog of more than 600 songs to Universal Music for an estimated $300 million. It may be the biggest acquisition of one songwriter’s publishing rights, and it’s another landmark for Dylan, who in 2016 won the Nobel Prize in Literature.

Universal will now collect fees any time Dylan’s songs are sold, streamed, covered by another musician or used in ads and movies. That makes Dylan’s catalog especially lucrative: Other artists have recorded his songs more than 6,000 times, and they have appeared often in movies, including “The Big Lebowski” and “Bad Santa 2.”

As streaming comes to dominate the music market, more investors are snapping up music copyrights. “Streaming has changed the landscape, from a licensing and royalty perspective,” one expert told The Washington Post. “Even though there’s eye-popping price tags, if you look at the returns in five, 10, or 20 years, these are viewed as very good investments.”

The pangram from yesterday’s Spelling Bee was headpiece. Today’s puzzle is above — or you can play online if you have a Games subscription.

P.S. Marc Lacey, The Times’s national editor, will be the new assistant managing editor for Live, where he will lead a team focused on briefings, blogs and chats.

Today’s episode of “The Daily” is about Trump’s immigration legacy. On the latest “Sway,” Kara Swisher interviews the chief executive of Cameo, the marketplace for personalized celebrity shout-outs.

Claire Moses, Ian Prasad Philbrick and Sanam Yar contributed to The Morning. You can reach the team at themorning@nytimes.com.