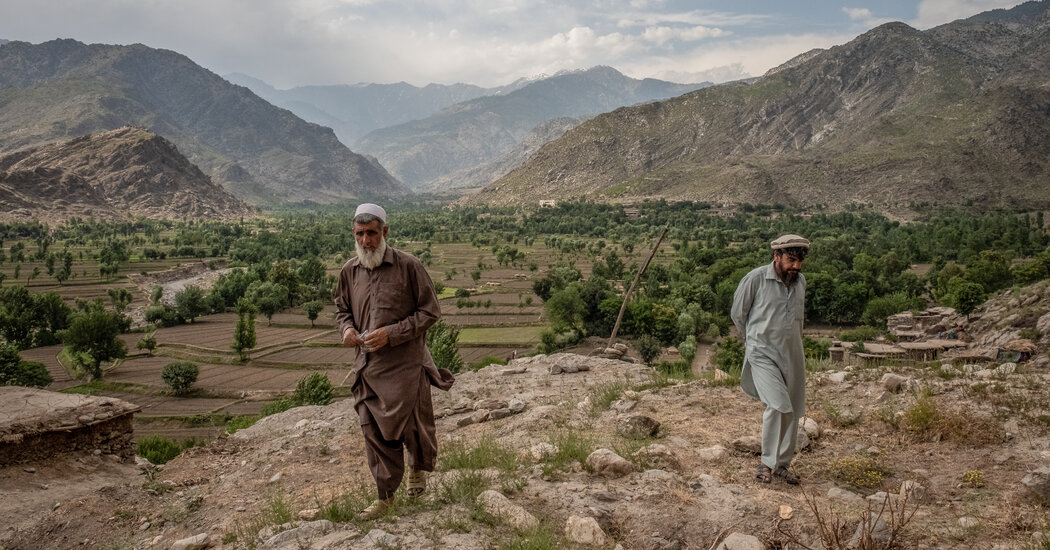 At harvest time, as neighbors and relatives reap their crops, 80-year-old Jamal Khan can only look in despair on the plot of land that was the source of his family’s livelihood — until the American forces arrived over a decade ago.

Just before sunset one day, armored vehicles drove into fields of knee-high corn stalks, claimed about 30 acres that were co-owned by about as many families and quickly cordoned off the area with barbed wire. This was now Combat Outpost Honaker-Miracle, one of the roughly 1,000 military installations the United States and its coalition partners would prop up across Afghanistan.

“In the whole vastness of the lord’s world, I had this plot of land and this house that I am living in and nothing else,” said Mr. Khan, who lives the Watapur District of Kunar Province, in eastern Afghanistan. “We told them this is our private land, how do you suddenly put up here? They said nothing.”

Mr. Khan is one of countless Afghans whose land became a casualty of the U.S.-led war and the sprawling military infrastructure born from it. They have been forced to navigate a maze of Afghan and American bureaucracy and indifference, stoking a growing bitterness toward coalition forces and the Afghan government alike.

Despite the drawdown of American forces in Afghanistan from more than 100,000 in 2011 to fewer than 5,000, some of the property they occupied has not been returned. Instead, the bases and the land have been transferred to Afghan security forces.

The Americans have left Watapur but Mr. Khan does not have his land back, and similar conflicts linger across wide swaths of the country. In at least half a dozen of Afghanistan’s 34 provinces, The New York Times has found land disputes involving owners who said they had simply been shut out.

In a country where due process is nearly impossible in the face of corruption and state erosion, the U.S. presence has added to a long history of land disputes that have often served as an underlying cause of local conflicts.

The Taliban touts the swift resolution of disputes in its shadow courts as a strength, and the unresolved discord over land bolsters the insurgents’ message that not only are Afghans deprived of justice under the American-backed government, but that the U.S. military presence has added to the injustice.

Mr. Khan still carries a pile of documents: petitions to the government, and even confirmation letters from the U.S. Army that say he is the rightful owner. On several occasions, he says, delegations from Kabul came to investigate — and they asked the villagers for money to cover their expenses during the stay.

But the most painful reminder of the trespass is his collection of small receipts. Although the Afghan army now occupies his land, Mr. Khan is still required to pay tax on the plot.

Over the years of fighting, the size of the U.S.-constructed installations varied greatly. Some bases were sprawling, even housing their own fast-food chain restaurants. In other cases, coalition forces would briefly occupy empty Afghan homes, destroying or modifying walls for defensive purposes before leaving.

The Americans sometimes negotiated temporary leases with local farmers, but those agreements were vulnerable to manipulation by corrupt local warlords and strongmen who brokered deals. During shorter stays, homeowners were rarely compensated.

“It would be the responsibility of the government of the Islamic Republic of Afghanistan to adjudicate and compensate, as appropriate, any and all entities that claim ownership to areas and facilities” provided by the Afghan government for use by U.S. forces, he said.

The Afghan defense ministry, despite repeated requests, did not comment.

Today, most installations are controlled by Afghan security forces; the few U.S. bases that remain are shuttering now as part of the U.S. deal with the Taliban.

In northern Balkh Province, the U.S.-led coalition forces built a base next to the provincial capital’s airport. Amanullah Balkhi, a local businessman, says the installation occupied about 20 acres of his land.

The defense ministry said it was government land, Mr. Balkhi was told, but if he proved he owned it, the coalition would compensate him and pay rent. He says he fought a six-year legal battle that cost him about $2 million, which he covered by selling two of his apartment buildings, renting out more land and taking on $500,000 of debt.

“I have the deed, and the government and the courts have attested that this is my land,” he said. “But the Americans still have the land and they still deny me.”

Mr. Balkhi has become deeply depressed, he said, adding, “I have ruined my life to get my right, but I have gotten nothing.”

The story of a base in Panjwai, in southern Kandahar Province, is almost identical — and speaks to the troubling legacy the United States has left behind.

About 10 years ago, dozens of coalition vehicles arrived at the small village and eyed about 10 acres of vineyard owned by half a dozen villagers. They even tasted the grapes before getting to work building a new base.

“They didn’t carve a road where there was a trek, where we came and went — they carved a road for themselves through people’s lands, people’s gardens,” said Fida Muhammad, a tribal elder from Panjwai and one of the vineyard’s owners.

In the initial days, there was word that the coalition forces were offering compensation, but the area was so restive that approaching the base for money meant taking potentially lethal risks. Villagers feared the Americans would mistake them for the Taliban. And they knew that if they did manage to get their money, the Taliban, who were everywhere, would know and come after them for profiting from the occupiers.

The area was so lush that “you had to squint your eyes to find a dry patch,” said Rashid Gul, a village resident. But these days it’s desolate except for one small patch of vineyard.

“It ruined the irrigation system too — for five years, the irrigation canals were ruined, the land dried,” Mr. Muhammad said of the coalition base. “Many families left the area. They went to the city for daily labor.”

As one of the village elders, Mr. Muhammad took the lead in trying to get compensation and reclaim the land, to no avail. When the Americans ran the base, he said, the villagers’ claim was simply lost in bureaucracy; come tomorrow, come the next day, he was told repeatedly.

“We have lost hope of finding someone who can get us our right,” said Mr. Muhammad, who said he had made about 30 trips with petitions. “It’s just tiring ourselves, losing more money, but we can’t find a door to knock on for justice.”

When a base was transferred to Afghan control, the forces stationed there were often too preoccupied with defending it against Taliban attacks to pay much attention to land claims. Many of the Afghan commanders who rotated through simply did not care about the local residents’ grievances, which they saw as an issue between the farmers and the Americans.

Mr. Gul worried that even if one day the plot of land in Panjwai were returned, figuring out which piece belonged to whom could spark new disagreements.

Land disputes have been one of the main issues of conflict in the village, he said. Just two weeks earlier, Mr. Muhammad had to quell a feud because one farmer’s tractor had crossed the boundary of another man’s land.

“All this land is mixed up now, no one knows which piece is whose,” Mr. Gul said. “You will be amazed at what kind of fights will break out between people over this.”

Asked about how long that would take, he smiled a tired smile.

“This is Afghanistan,” he said.