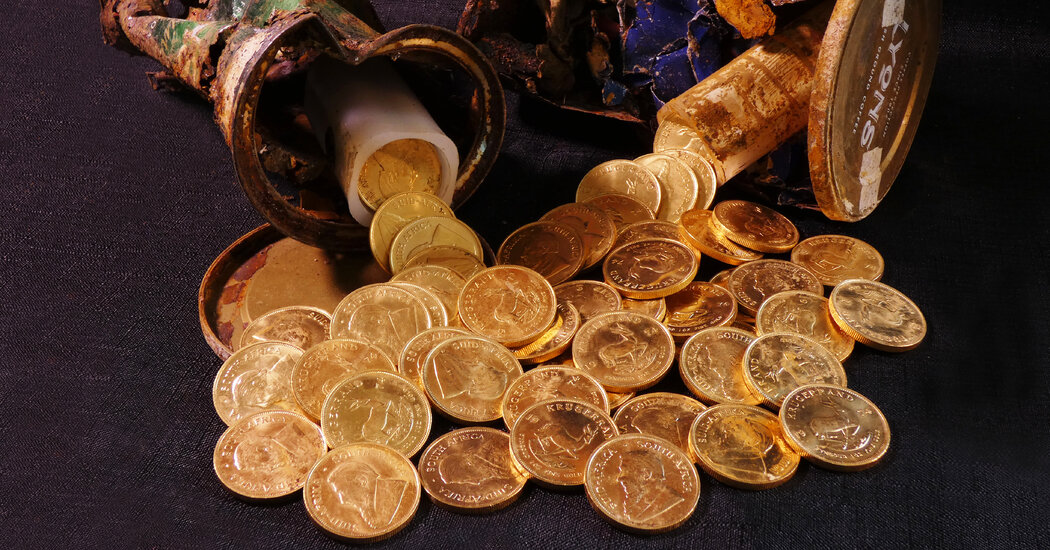 LONDON — Gardeners in Hampshire, a county in southeast England, were weeding their yard in April when they found 63 gold coins and one silver coin from King Henry VIII’s reign in the 16th century, with four of the coins inscribed with the initials of the king’s wives Catherine of Aragon, Anne Boleyn and Jane Seymour.

The archaeological find was one of more than 47,000 in England and Wales that were reported this year, amid an increase in backyard gardening during coronavirus lockdowns, the British Museum said on Wednesday.

In another discovery, in Milton Keynes, a town northwest of London, gardeners found 50 solid gold South African Krugerrand coins that were minted in the 1970s during apartheid.

The news of the archaeological finds came as the British government said last week that it planned to broaden its definition of what constitutes a treasure so that more rare artifacts — not just ones made of gold or silver, or that were more than 300 years old — could be preserved for display in museums rather than sold to private collectors.

In Britain, many historical objects that are found and believed to be from the 18th century or earlier must by law be reported to local officials for review. If the object meets the government’s definition of treasure, national or local museums have the option to acquire it and pay a reward, equivalent to the market value of the object, that is split between the finder and the landowner.

Since 1997, the law in most of Britain has defined as treasure, and thus protected, objects that are made of gold or silver and are more than 300 years old, from before mass production began with the Industrial Revolution.

But as the growing popularity of metal detecting as a hobby meant that more historical objects were being found, museums have missed out on items of archaeological significance that did not fall within the law’s definition, including Bronze Age axes, Iron Age caldrons, and medieval weapons and jewelry.

In 2017, 1,267 pieces went through the process in which a committee determines whether an item should be considered a treasure, up from 79 pieces in 1997.

One of the items that did not meet the previous definition of “treasure” was a Roman cavalry parade helmet from the first or second century found in 2010 by a metal detector user in Crosby Garrett, Cumbria. It was sold privately and is now in a private collection.

“That was a disappointment from an archaeological perspective because if they aren’t acquired by museums, no one ever gets the opportunity to see them,” said Michael Lewis, the head of portable antiquities and treasure at the British Museum. “Ultimately what we’re trying to do is ensure that everyone enjoys these objects, not just an individual.”