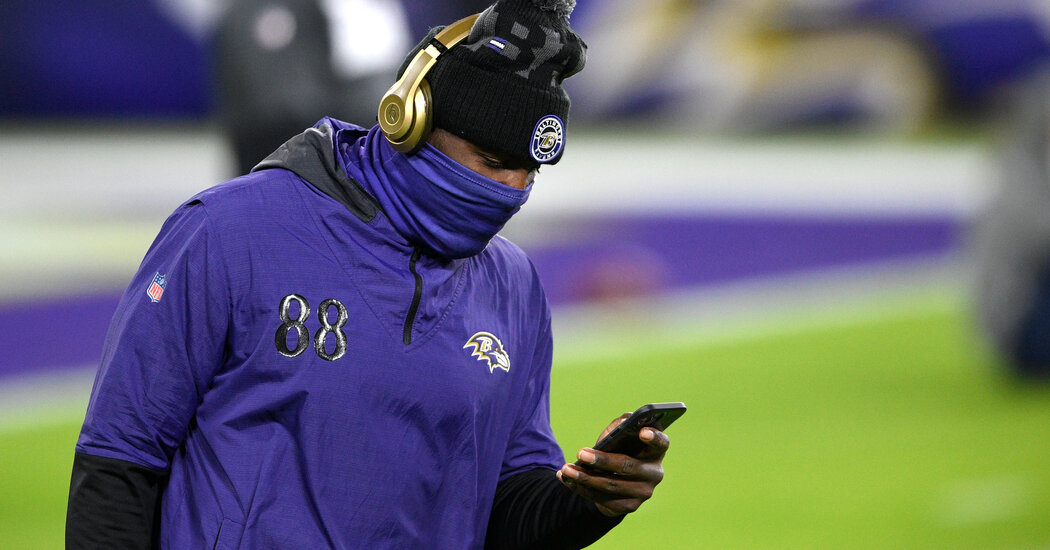 It was quite an evening for Dez Bryant.

Bryant, the Baltimore Ravens wide receiver, began to warm up as usual before Tuesday night’s rescheduled game against his former team, the visiting Dallas Cowboys. Bryant had been looking forward to the matchup more than usual: After spending eight years in Dallas, he had missed the past two seasons with a torn Achilles’ tendon before returning to the N.F.L. this year with Baltimore.

His first meeting with his old team, then, was much anticipated. But it was not to be.

Bryant was abruptly pulled from the field before the end of warm-ups. The N.F.L. said that his two pregame coronavirus tests had produced inconclusive results but that the results had not come back until shortly before game time. A quick follow-up test was positive, and Bryant left the stadium.

The rest of Bryant’s evening is curiously well documented thanks to his Twitter feed.

His first tweet didn’t beat around the bush: “Tell me why they pull me from warming up so I can go get tested” — here he added a profanity — “I tested positive for Covid.”

He followed up by letting his followers know that he was puzzled by the positive test because he had not changed his routine. The next tweet may have alarmed Ravens fans: a frustrated Bryant declared that his season was over.

Less than 30 minutes later, he was openly wondering if anyone should be playing. Puzzled by the rules that had sent him away but not other players, he tagged the N.F.L. in a tweet and asked why.

(Answer: The game went on. There were no other positive tests among players on either team.)

With current and former players now sending him messages of support through their own Twitter accounts, there was only one solution, Bryant figured:

He then mused about sharing information about his outside business endeavors and then did a quick catch-up for latecomers: “I got covid everyone.”

As halftime of the Ravens-Cowboys game approached, he also assured readers that he was “not drunk yet” and had finished only one glass of wine. He also clarified that he was not planning to walk away from the season.

His choice of libation led him to call for followers to share pictures of the wine they were drinking. Bryant retweeted about a dozen of the photos.

By the time the game ended, with the Ravens 34-17 winners over the Cowboys, his melancholy had turned to exuberance.

Soon afterward, his Ravens teammates were back in the locker room, and back to their phones. Running back Mark Ingram quickly sought out Bryant, tweeting: “We got your back brother. You gon beat this like every other obstacle.”

And quarterback Lamar Jackson sent a message directly to Bryant in his postgame news conference.

Bryant tweeted that out, too.