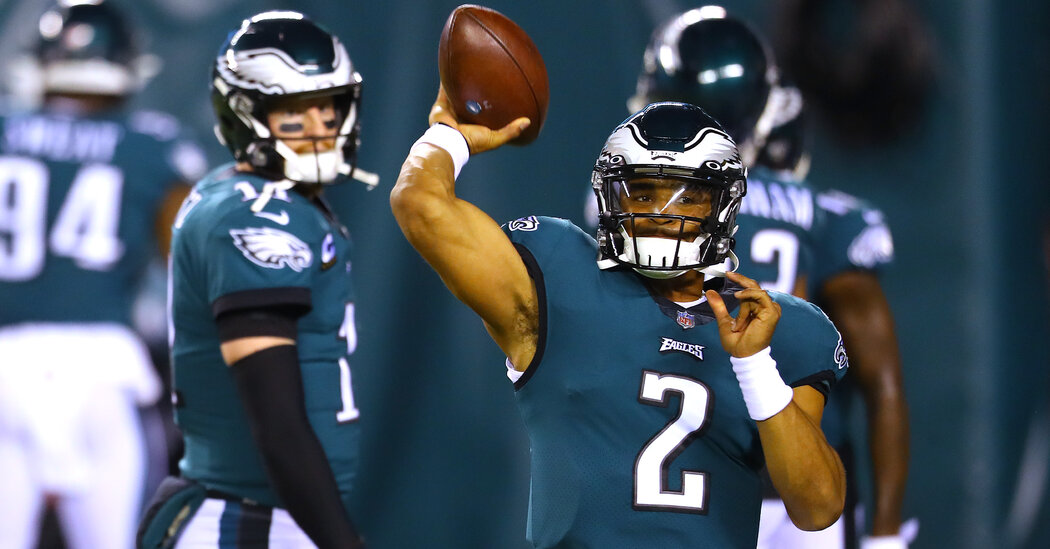 The Philadelphia Eagles were too cursed for too long to finally win a Super Bowl without a “Twilight Zone”-worthy twist. Fate granted the Eagles a championship but denied them the franchise quarterback they thought they were getting with it.

Carson Wentz’s career has been clouded by skepticism since the moment Nick Foles hoisted the Lombardi Trophy at the end of the 2017 season. Three seasons later, Wentz’s benching in favor of Jalen Hurts, a rookie, casts doubts on his future and threatens to plunge the Eagles into a long, bitter rebuilding cycle.

Wentz is suffering through a catastrophic 2020 season. He leads the N.F.L. with 15 interceptions and has endured 50 sacks, 10 more than any other quarterback. While a revolving door cast of receivers and offensive linemen deserves a share of the blame, those players have nothing to do with the fact that Wentz’s throwing mechanics, accuracy, timing and decision-making have gone haywire. He is hesitant to throw to wide-open receivers, blunders into sacks while stumbling around the pocket and appears almost morally opposed to checking down for a safe 4-yard toss when he can force a 40-yard interception instead.

Worst of all, his 2020 performance looks less like an extended slump than the final stage of a three-year decline.

Wentz, the second overall selection in the 2016 draft, appeared destined for superstardom when he threw 33 touchdown passes and led the Eagles to an 11-2 record in 2017 before tearing his anterior cruciate ligament in December. Foles, a journeyman backup, relieved Wentz and led the Eagles through the playoffs and past the New England Patriots for the franchise’s first Super Bowl victory. Foles, not Wentz, outdueled Tom Brady, caught the “Philly Special” and was honored with a statue outside Lincoln Financial Field.

Anyone who studied ancient history knows that a general as triumphant as Foles either becomes emperor or is exiled to a barren Mediterranean island, and quarterback disputes are typically resolved similarly. Yet the Eagles retained both quarterbacks for the 2018 season. Wentz proved to be turnover- and mistake-prone when he returned to the lineup, and fracturing a vertebra in December of that year led to another late-season hot streak by Foles that propelled the Eagles into the playoffs.

The time had come for an exile, and for a confidence-boosting coronation. Foles signed with the Jacksonville Jaguars in the 2019 off-season. Wentz signed a four-year, $128 million extension, then battled through another mixed bag of a season. He threw for 4,039 yards and 27 touchdowns to lead the injury-ravaged Eagles to a playoff berth in 2019, but appeared to be malfunctioning for long stretches. His season ended with yet another injury in a playoff loss. Foles’s ineffectiveness in Jacksonville in 2019 silenced any second-guessers, but Wentz’s time without a challenger would be brief.

The Eagles ostensibly selected Hurts in the second round of this year’s draft to provide an insurance policy against further Wentz injuries and to add an occasional wildcat wrinkle to their offense. It was like a couple thinking an amicable third partner would somehow spice up their romance, and had about as high a likelihood for success. Hurts’s cameos on gadget plays took on increasing significance as Wentz flailed, but Coach Doug Pederson seemed reluctant to risk upstaging Wentz by giving Hurts more to do.

Hurts finally replaced Wentz with the Eagles trailing, 20-3, in the third quarter against the Green Bay Packers on Sunday, and did a better job of moving the offense, though that may have been the case only because the Packers were unprepared for the switch. Pederson named Hurts the starter against the New Orleans Saints for Week 14; the battle for the future of the franchise has officially been joined.

Moving on from Wentz, if the Eagles choose to do so, will not be as simple as reprinting the depth charts. Wentz’s contract guarantees him huge sums in staggered stages, insulating him from any hasty organizational decisions. Wentz will cost the Eagles almost $35 million in cap space to keep in 2021, but over $59 million to cut. So even if Hurts assumes the job and plays like Patrick Mahomes for the next month, Wentz will almost certainly remain on the 2021 roster.

Furthermore, the Eagles project to be $66 million over next year’s salary cap because of the backloaded contracts of many veteran Super Bowl holdovers. Any attempt at a cap purge could leave the Eagles with Hurts leading a lineup of minimum wage earners while Wentz eats a prohibitive chunk of the payroll to clap politely from the bench. The Eagles are in no financial position to begin rebuilding around a rookie quarterback, which circles back to the question of why they drafted one.

The Eagles’ no-win quarterback predicament reflects poorly upon Pederson, who supervised Wentz’s backslide into ineptitude, and upon General Manager Howie Roseman, who negotiated Wentz’s contract, drafted Hurts and strained the limits of team economics to keep much of the Super Bowl nucleus intact. Roseman has added almost no top-tier offensive talent in the last three seasons, and Pederson’s game plans have stagnated, making Wentz as much a symptom of the Eagles’ deeper problems as the cause.

However the Wentz-Hurts dilemma plays out, it will look nothing like what the Eagles were hoping for when Wentz’s ascendance led, indirectly, to a Super Bowl victory. Instead of enjoying the prosperity and stability that come with a young franchise quarterback, they’re trapped in a “Groundhog Day” cycle of desperate reruns, where the same creaky cast enters September with championship aspirations but reaches December wondering whether a backup will be able to bail out an increasingly battered, bewildered starter.