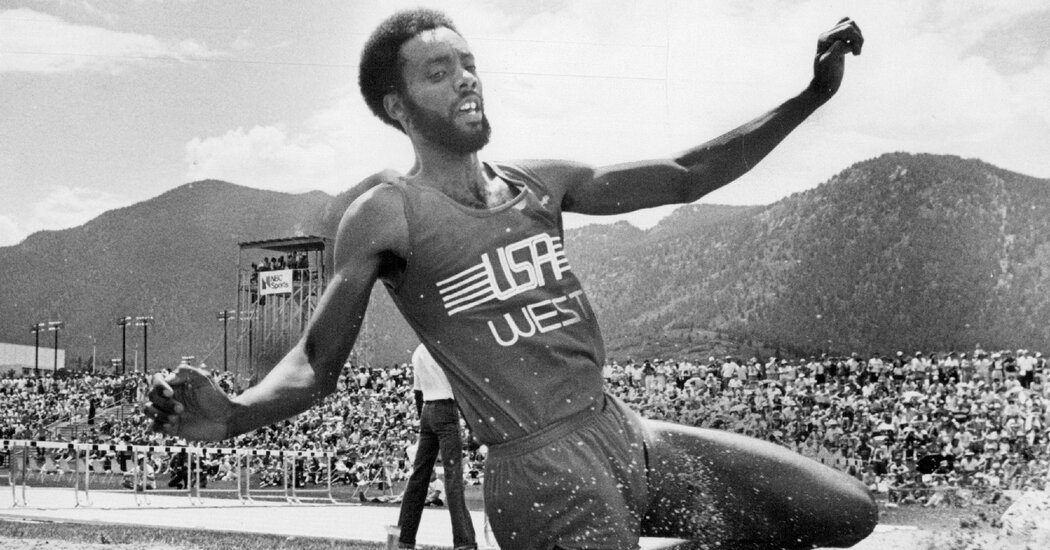 This obituary is part of a series about people who have died in the coronavirus pandemic. Read about others here.

Arnie Robinson Jr., who won the gold medal in the long jump at the 1976 Summer Olympics in Montreal, died on Dec. 1 at his home in San Diego. He was 72.

His death was confirmed by his son, Paul, who said the cause was complications of Covid-19.

After placing third in the long jump at the 1972 Summer Olympics in Munich, where he wore an anti‐Vietnam War armband as he accepted his bronze medal, Mr. Robinson set his sights on winning gold four years later in Montreal.

Mr. Robinson, who had represented the Army when he qualified for the Munich games, left the service the following year and set about training in earnest. He dashed up the steps at Balboa Stadium in San Diego until his legs ached, while living off the earnings of his wife, Cynthia, and money from his parents. When abdominal problems upended his training, a chiropractor helped him get back into form, he told The New York Times in 1976.

“It was no miracle, only the Lord above can do miracles,” he said. “But it was damn near it.”

Over all, he won seven national long jump titles, and he was the top-ranked long jumper in the world from 1976 to 1978.

He retired from competition in 1979 and in 1982 became a coach at San Diego Mesa College, where he also was a professor of health and exercise science until his retirement in 2010, the college said.

In a statement, U.S.A. Track & Field, the governing body for the sport in the United States, described Mr. Robinson as “one of the greatest long jumpers in history.”

Arnie Paul Robinson Jr. was born on April 7, 1948, in San Diego. His father, Arnie Robinson Sr., was an electrician and a small-business owner. His mother, Verneater Robinson, was a lifelong volunteer at Mount Zion Missionary Baptist Church in San Diego.

His son, Paul Robinson, 42, was born shortly before his father retired from competition. In an interview, he said it had taken several years before he learned his father was an Olympian — one with a gold medal to his name, no less. It simply didn’t come up, he said.

“I found out about his being an Olympic athlete when I was 6 or 7 years old,” Paul Robinson said. “He began to tell me about going to the Olympics, winning the bronze, then the gold medal. I had no idea. None of his friends brought it up.”

Mr. Robinson was seriously injured in 2000 when a drunken driver struck his car. He recovered and went on to coach the U.S.A. Track & Field long jump team at the 2003 world championships.

In 2005, Mr. Robinson learned he had glioblastoma, a form of brain cancer, and was told he had six months to live, U.S.A. Track & Field said. He lived an additional 15 years.

Paul Robinson said his father had begun feeling unwell in mid-November, with labored breathing and coughing. He tested positive for the coronavirus only about a week before he died at his home in the Skyline Hills neighborhood of San Diego, his son said.

Mr. Robinson’s marriage to Cynthia Eley ended in divorce. In addition to his son, he is survived by three sisters: Margaret Tucker, Carolyn Johnson and Arnette Lavergne. A younger brother, Michael Robinson, died in 2011.

Later in life, while he was still coaching and teaching, Mr. Robinson found another passion, his son said: building houses.

“He started with a room addition at our grandmother’s house,” he said. “He learned how to frame, the plumbing, the electrical, all the aspects of building houses. That ultimately led him to building his own home, the one he lived in for 30 years.”

“He had a passion for it,” he said, “just like athletics.”