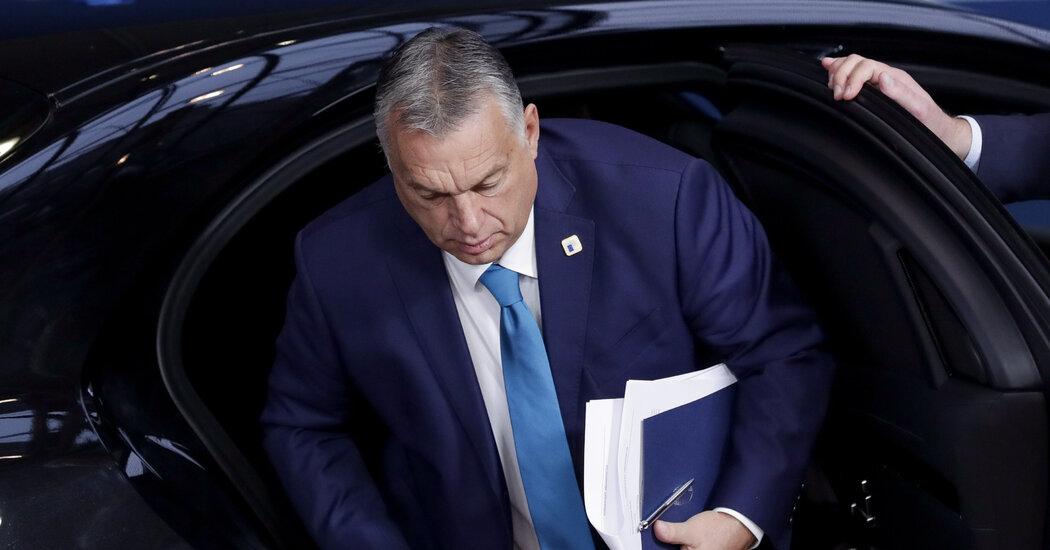 In a meeting in Brussels, they broke through a veto by Poland and Hungary that had been holding up the hefty financial package, after the two nations tried to evade oversight that could strip them of E.U. funds if they continue to overhaul democratic institutions at home.

The agreement was reached a few hours into a summit in Brussels, and was announced by Charles Michel, the president of the European Council, who presides over the group of E.U. leaders.

“Now we can start with the implementation and build back our economies,” Mr. Michel said in a tweet. “Our landmark recovery package will drive forward our green & digital transitions.”

The compromise brings an end to the lengthy negotiations that had threatened to derail a carefully laid-out plan to deploy 1.8 trillion euros, or $2.2 trillion, in funding, including money desperately needed for pandemic recovery. And it brings the E.U. to a crucial moment in its history, as the bloc has agreed to issue joint debt to finance some of the recovery funding, an important step in its sometimes disrupted integration.

But the dispute with Poland and Hungary also deepened fissures between member states and forced European leaders to reckon with the very nature of the bloc itself.

The compromise, brokered by Germany — which holds the bloc’s rotating presidency — will still tie the funding to adherence to rule-of-law standards, a victory for most member states.

But the legally binding measure will be watered down, and any country that disagrees with the mechanism tying E.U. funding to rule-of-law conditions will be able to challenge it in the European Court of Justice.

The details of how the mechanism will work, to be determined by the bloc’s executive, the European Commission, make for a lengthy process, postponing any real action by months, if not years. That would be advantageous to Viktor Orban, Hungary’s illiberal prime minister, as he faces elections in 2022.

Some legal experts have criticized the agreement, raising concerns that it lets Mr. Orban in particular off the hook.

The European Parliament, which has been advancing the use of this new way to check Hungary and Poland’s democratic backsliding by threatening to withhold financial support, was optimistic that the compromise was a step forward.

“This is an important win for the rule of law and the E.U.,” tweeted Petri Sarvamaa, a member of the European Parliament who has been participating in the budget discussions. “The Parliament or the Council did not give up to threats.”

Hungary and Poland have long been at loggerheads with the European Commission, the bloc’s executive branch, over their dismantling of key rule-of-law institutions. The European Court of Justice, the highest court in the E.U., has declared some of those policies illegal, but the backsliding by the two countries has continued. Hungarian and Polish leaders argue that institutional changes are their national prerogative, and accuse the commission of applying double standards to East European states, describing the rule-of-law provisions as arbitrary and political.

Many worry that the damage being done to democracy in Poland and Hungary will not only be hard to reverse, but also is detrimental to the whole European Union, the world’s richest bloc of democracies.

“Europe was set up as a community of like-minded states, and in its DNA, it doesn’t have this awareness that there may be fundamental breaches of the rule of law within the E.U.,” said Wojciech Sadurski, a Polish and Australian expert on constitutional law who is a prominent critic of the Polish government.

On the ground in Hungary and Poland, the impact of these domestic policies is deeply felt.

In Hungary, Mr. Orban and his allies have led a slow, methodical erosion of the rule of law. They adopted a new constitution and changed election laws to favor themselves. The Constitutional Court has been stacked with loyalists, as have high-level posts encompassing public media outlets, prosecutor general, the National Bank of Hungary and beyond.

This consolidation of power has drastically curbed meaningful scrutiny of government. Elections are free, but they are not fair; much of the news media is controlled by allies of the governing party; the opposition in Parliament is small and has no practical power.

Poland’s judicial overhaul, coming under the guise of a push to exorcise remnants of the Communist-era system, has also drawn criticism from the European Commission, which sees interference with judicial independence.

The compromise over the rule-of-law conditionality comes as Poland is being rocked by a surge in coronavirus cases, as well as a growing protest movement over women’s rights.

Laurent Pech, a professor of the European Law at Middlesex University in London, said both countries were following “the same blueprint to undermine checks and balances of power.”

“It starts with capturing the constitutional court, then taking control of the public media, the prosecutor services and the police, usually concluding with a revision of the electoral code,” he said.

As a result, Mr. Pech said, Hungary is now “an electoral autocracy,” with Poland, where the governing party faces more resistance, not far behind.

Since coming to power, Poland’s nationalist-conservative government has taken control of the constitutional tribunal, put the prosecutor’s office under the authority of the Justice Ministry, and set up a new disciplinary regime for judges.

The European Court of Justice has ordered the suspension of that disciplinary body, but in recent months, it has stripped immunity and cut the salaries of two judges who had been critical of the government.

The European Commission has brought several cases against both Hungary and Poland, mostly relating to the overhauls and management of the judiciary. But the process is slow, requiring dozens of people to be dedicated to a case over several months. In some instances, the court’s ruling comes too late.

The Commission and Parliament have advanced cases against Poland and Hungary over serious breaches of E.U. values. The ultimate penalty is a removal of voting rights, but no progress has been made in either case.

A key node in the process lies with the grouping of member state leaders, known as the European Council, where Mr. Orban and Prime Minister Mateusz Morawiecki of Poland have occasional allies, chief among them Chancellor Angela Merkel of Germany.

The mistrust generated among citizens and governments in some of the wealthier and more mature democracies is a fresh threat to the bloc’s unity. The so-called frugal nations, which are net overall contributors to the budget, are leading the charge against Poland and Hungary’s push to skirt scrutiny.

Recent research suggests that citizens in Denmark, Finland, the Netherlands and Sweden are not bothered by their nations’ big contributions to E.U. spending, but feel that some of the receiving countries did not have necessary checks and balances to ensure sound spending. Another poll found that more than 70 percent of E.U. citizens, including those in Poland and Hungary, want rule-of-law checks for disbursing money.

And while the most acute issues involve Poland and Hungary, rule-of-law problems lurk in several other states, giving rise to concerns that appeasing Warsaw and Budapest might enable more violations elsewhere.

“You can understand the importance of the rule of law when it is gone,” Mr. Pech said. “When you have it, it is much more difficult to value it.”

Matina Stevis-Gridneff and Monika Pronczuk reported from Brussels, and Benjamin Novak from Budapest.