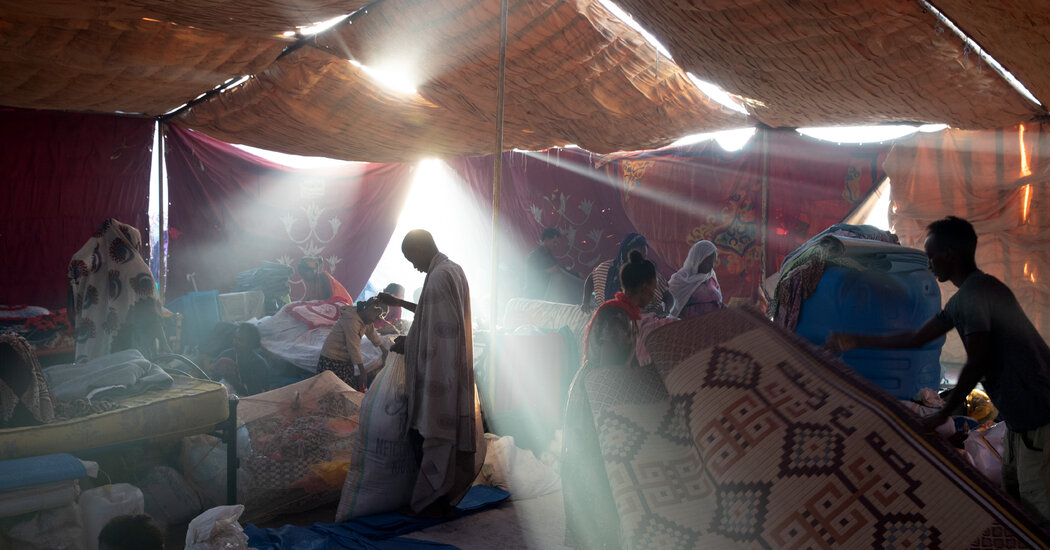 HAMDAYET, Sudan — The armed men who stopped Ashenafi Hailu along the dirt road dragged him by a noose so they could save bullets.

Mr. Ashenafi, 24, was racing on his motorcycle to the aid of a childhood friend trapped by the Ethiopian government’s military offensive in the northern region of Tigray when a group of men on foot confronted him. They identified themselves as militia members of a rival ethnic group, he said, and they took his cash and began beating him, laughing ominously.

“Finish him!” Mr. Ashenafi remembered one of the men saying.

As they tightened the noose around his neck and began pulling him along the road, Mr. Ashenafi was sure he was going to die, and he eventually passed out. But he said he awoke alone near a pile of bodies, children among them. His motorcycle was gone.

Mr. Ashenafi and dozens of other Tigrayan refugees fled the violence and settled outside the remote and dusty town of Hamdayet, a community of just a few thousand people near the border, where I spoke to them. Their firsthand accounts, shared a month after Ethiopia’s prime minister, Abiy Ahmed, declared war on the Tigray region, detail a devastating conflict that has become a grisly wellspring of looting, ethnic antagonism and killings.

Many of the refugees have lingered here rather than moving on to the more established refugee camps farther into Sudan, staying closer to home so they can get any news about their towns or missing loved ones. But little information is getting out, with mobile networks and the internet blocked for weeks by the Ethiopian government.

Nearly 50,000 have fled to Sudan so far, in what the United Nations has called the worst exodus of refugees Ethiopia has seen in more than two decades. And their accounts contradict the repeated claims from Mr. Abiy, who won the Nobel Peace Prize last year for ending the border conflict with neighboring Eritrea, that no civilians are being hurt.

The Tigrayans describe being caught between indiscriminate military shelling and a campaign of killing, rape and looting by government-allied ethnic militias. Several told me that they saw dozens of bodies along the route as they fled their shops, homes and farms and took to the long road to the border with Sudan, in stifling heat.

As the fighting in Tigray continues, it is degenerating into a guerrilla war that could unravel both Ethiopia’s national fabric and the stability of the entire Horn of Africa region. That includes Eritrea, which is allied with Ethiopia against the Tigray and has been shelled by the rebel forces; and Sudan, which has heavily deployed its army along its restive border with Ethiopia even as it has allowed refugees to cross.

The Tigray make up about 6 percent of Ethiopia’s 110 million people, and they were the arbiters of power and money in the country from 1991, when they helped dismantle a military dictatorship, until 2018, when anti-government protests catapulted Mr. Abiy to power.

Mr. Abiy had sought to emphasize national unity and diversity in a multiethnic Ethiopia, even as he began methodically excluding Tigrayan figures from public life and condemning their abuses while they were in power. Now, the conflict stands at stark odds with the legacy he was seeking, and with the stability of the entire country.

If Mr. Abiy’s aim was to unite an increasingly divided country, then “this conflict has made that harder to achieve, and so increased the likelihood of serious ongoing political instability,” said William Davison, a senior Ethiopia analyst with the International Crisis Group who was recently expelled from the country.

Adding to the deadly mix are the involvement of rival ethnic militia groups. One of them is the Fano, a militia from the Amhara ethnic group. Along with Amhara regional government security forces, Fano took part in the intervention in Tigray, Mr. Davison said.

While Fano is a term loosely used to refer to young Amhara militias or protesters, Mr. Davison added that it is also “the name given to youthful Amhara vigilante groups that become more active during times when there is perceived to be insecurity that is not being managed by the authorities.”

Tigrayan refugees in Sudan said that Fano fighters attacked and maimed them, ransacked their properties and extorted them as they sought to flee. Many of the Tigrayans, including Mr. Ashenafi, said that they were afraid of going back and that the experience had left them sleepless and scarred.

After Mr. Ashenafi awoke and saw the bodies around him, he trudged through a nearby forest to reach the home of his friend, Haftamu Berhanu, who took him in. Photos taken by Mr. Haftamu and seen by The New York Times showed Mr. Ashenafi lying on his back, white skin peeled away around his neck from the noose.

For days afterward, Mr. Ashenafi could not talk or swallow anything and communicated with his friend through pointing or writing things down.

“It was heartbreaking,” Mr. Haftamu said of the days caring for his friend.

“I didn’t expect in our life that our government would kill us,” Mr. Ashenafi said. “I am frightened so much. I am not sleeping at night.”

Many of the refugees who made it to Sudan have been resettled to the Um Rakuba camp about 43 miles away from the border. But many are also staying around a refugee transit point in Hamdayet, hoping to return home or reunite with their families once it is safe.

In this dusty outpost, the refugees convene every morning at the Tekeze River, a natural border between Ethiopia and Sudan, to shower, collect water and clean whatever clothes they brought with them. On a recent afternoon, as children dived into the flowing river and Ethiopian music played from a nearby phone, the refugees recounted scenes of horror that they witnessed.

Many told me that they came from Humera, an agricultural town of about 30,000 people near both the Sudanese and Eritrean borders. Thousands suddenly fled the town with whatever they could carry when shelling began around midnight from what the refugees said was the direction of Eritrea.

Some gathered first at nearby churches, but after hearing that other churches had been shelled, they started the hourslong journey on foot to Sudan. They said that militia fighters began streaming in.

“The Amhara militia cut people’s heads,” said a Humera resident named Meles, who wanted to be identified by only his first name out of fear of retribution.

Meles, who owned a small cafe, said that the Fano’s reputation preceded them and that just as he feared, he encountered many dead bodies along the way to Sudan. As he spoke to me, a crowd gathered near him on the banks of the river, many nodding and verbally affirming his account as he told it.

At least 139 children are among those who arrived in Sudan unaccompanied, many of whom are now at risk of abuse and discrimination, according to the organization Save the Children.

With the Tigray region sandwiched between the Amhara region and Eritrea, which is aligned with the Ethiopian national government, Meles said he was glad that refugees like him had another outlet for escape.

“Thank God there’s Sudan for us to turn to,” he said.

“I had to speak my fluent Amharic to survive,” said Filimon Shishay, a 21-year-old Tigrayan who said he encountered the Fano and had to part with the $5 he had with him. “They hate us,” he said.

There has long been enmity between the Tigray and Amhara. When Tigrayan rebels seized power in 1991, Amharas claimed that the Tigray People’s Liberation Front, which governed the region, occupied land that historically belonged to them.

“The widespread assumption is T.P.L.F. wanted to annex these areas in order to have a border with Sudan and to tap into the fertile land for economic development,” Hone Mandefro, an Ethiopian analyst and a doctoral candidate in sociology and anthropology at Concordia University in Canada, said in an email.

Mr. Davison of the International Crisis Group said that with Amhara security and militia forces active in Tigray in recent weeks, and with some Amhara administrators put in place there, “it appears to be a de facto Amhara occupation of territory they claim the T.P.L.F. annexed.”

The move is likely to lead to violent Tigrayan reprisals, he said, as may have already occurred in the town of Mai Kadra, where human rights groups have said forces loyal to the liberation front massacred as many as 600 people, most of them Amhara.

Many refugees in Hamdayet blamed politicians, and particularly Mr. Abiy, for pitting civilians against one another. “The Amhara and the Tigray are one,” Negese Berhe Hailu, a 25-year-old engineer, said.

Hadas Hagos, 67, fled her home in Humera — which is part of the larger West Tigray area the Amharas claim — and worried she wouldn’t be able to go back or see the family members she left behind. Other refugees who arrived later informed her that her home had been looted.

“We fought for freedom and democracy,” said Ms. Hadas, breaking into tears as she recounted how she and her family fought against the Marxist regime in the 1980s, and how she lost her brother to the war. “We don’t deserve this kind of life.”