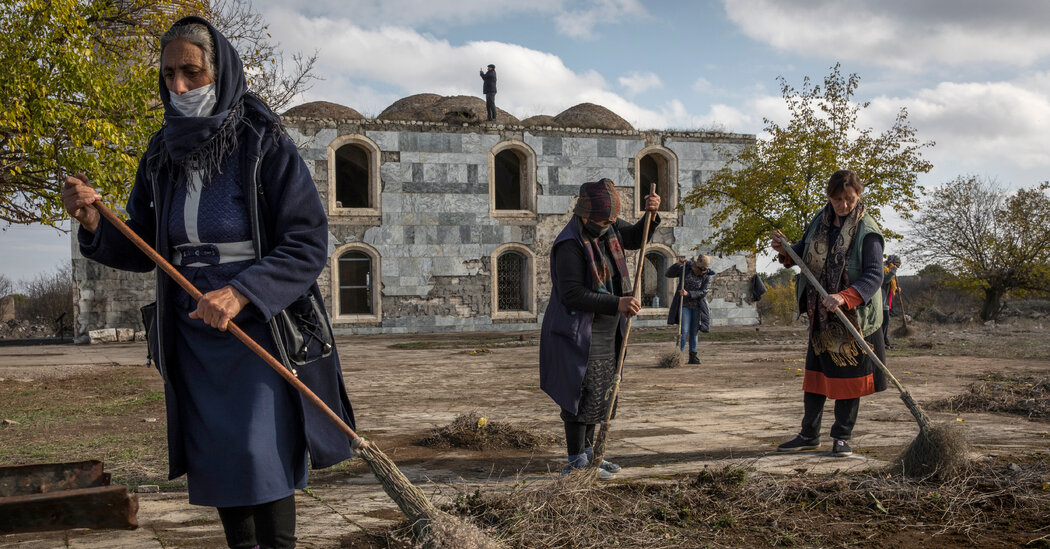 For Armenians uprooted from their homes, and for Azerbaijanis returning to uninhabitable towns, “It’s going to be very hard to forgive.”

By Carlotta Gall and Anton Troianovski

FIZULI, Azerbaijan — Crossing into territory that Azerbaijan recently recaptured from Armenia is a journey into a devastated wasteland reminiscent of a World War I battlefield. The road passes miles of abandoned trenches and bunkers, and village after village of ruins, the white stones of homesteads scattered, every movable item — roofs, doors, window frames — picked clean.

The absence of life is eerie.

Wrecked Armenian tanks and armor lay beside the road and in hilltop positions, testament to the devastating power of Azerbaijani drones. Abandoned uniforms and equipment signal a panicked retreat by Armenian soldiers as Azerbaijani forces seized control of the district in early November.

Decades after the surrounding territory was seized by Armenia, the town of Fizuli, once a prosperous agricultural settlement of some 30,000 people, has become a forest, its ruined public buildings smothered by trees and undergrowth. The fate of the larger town of Aghdam, further north, is even more stark, its buildings split open to the skies on a desiccated plain, its main bridge destroyed.

“It’s going to be very hard for me to forgive them,” Elmaddin Safarov, 47, an army veteran, said of the Armenians, as he gazed at the wreckage of Aghdam, where 17 of his relatives died.

The conflict over Nagorno-Karabakh, an ethnically Armenian enclave within Azerbaijan, has been one of the world’s most intractable territorial disputes. A six-year war ended in 1994 with Armenia claiming not just Nagorno-Karabakh but also great swathes of surrounding territory, and driving more than 800,000 Azerbaijanis into exile.

Azerbaijan regained control of Fizuli and Aghdam, part of the territory that Armenia had controlled, after six weeks of a blistering military offensive that ended with a Russian-brokered truce. Most of the core of Nagorno-Karabakh remains in Armenian hands, patrolled by Russian peacekeepers.

The war’s violence — the most intense conflict in Europe or its periphery this century — has layered fresh trauma and tragedy on top of decades of devastation.

For Armenians, it is families uprooted, a homeland lost, thousands of soldiers killed while defending against a fearsome 21st-century war machine. For Azerbaijanis, it is the legacy of a quarter-century of expulsion from their Soviet-era houses, from territory that is now recaptured but that may not become habitable for years.

And while the war may be over, a repository of hatred, reinforced by reports of atrocities by both sides, including videos of executions and beheadings of prisoners, promises to linger for generations to come.

Just days before, as Mr. Safarov was taking in his homeland’s devastation, a chilly mountain fog was creeping through the trees and filling every crevice of a military camp hidden off a village road on the other side of the front line, to the north. There, Armenian volunteer soldiers, some in their 60s, in sundry sneakers and hats, their faces blank and weathered, listened to their commander in silence and sadness.

The commander, retired Col. Artur Aleksanyan, 63, was telling them that it was time to go home.

“Everything is only beginning,” he pledged in a soft voice. “I’m sure we will return to our lands.”

Colonel Aleksanyan’s men, asked about the war, fixed on the horrors of Azerbaijan’s “suicide drones” that hovered over the battlefield, waiting for a target. The ordnance was so precise that Armenian soldiers operating battle tanks would drive onto the battlefield, fire off a round and jump out and run for cover, the soldiers said.

“It was hell,” one man kept repeating.

Reviewing his troops’ positions at the front, where the heavy weaponry had just been withdrawn, Colonel Aleksanyan picked his way through the dense, sticky mud past unexploded cluster bombs with their telltale red ribbons. The hillside was pockmarked with blast craters, some of them filled with twisted metal, moldy bread and human excrement. Along the ridgeline, the troops had dug trenches, a few feet deep and barely wide enough for one man to sleep in while a comrade manned the machine gun above him.

Colonel Aleksanyan was still dealing with the stomach injury he had sustained in the last war, in the 1990s, and the catheter tube snaking out of his uniform as he trudged up the battlefield was a reminder of that conflict’s unhealed wounds. He pointed out the valley below where, this fall, Azerbaijan had sent waves of infantry; his unit held their ground, and the scores of dead lay there for weeks, the stench drifting up to the trenches, until after the war’s end.

“We need to analyze our mistakes and after this, we will return,” Colonel Aleksanyan told his troops. “All the Armenians of all the world stand behind us.”

Armenians believe that the Soviet Union’s early decision to make Nagorno-Karabakh part of Azerbaijan is a historical wrong.

Colonel Aleksanyan was on the victorious side in the 1990s, when Armenia captured not only Nagorno-Karabakh proper but also surrounding territory inhabited by hundreds of thousands of Azerbaijanis.

To Armenia, occupying so much Azerbaijani territory was necessary to assure Nagorno-Karabakh’s security. To Azerbaijanis, it was an injustice that they were determined to reverse.

Now, despite its celebration of victory, Azerbaijan has recovered a mostly desolate and destroyed region.

“It looks like a hell,” said Umud Mirzayev, head of an Azerbaijani news agency, whose own village was among those ruined. “It used to be so green; it’s a place that was famous for farming, for grapes, cotton and sheep.”

Two former college classmates, returning to the town of Fizuli for the first time since fleeing the war 27 years earlier, struggled to find their way through ruins smothered in brambles and sprouting trees.

“It was impossible to pass along the roads because they are full of trees and undergrowth,” said one of them, Atakshi Babayev.

His companion, Nureddin Namazaliyev spotted the imposing czarist portico of the regional newspaper building, one of the few monuments still recognizable, and instantly knew his way home. His father had worked as editor in chief of the newspaper, Araz, for 50 years, and he had often walked with him to work.

But when he reached their old home, nothing remained.

“I could not find even a small piece of my house, not a piece of glass, not a single nail,” he said. He took instead some soil from the yard and brought it back to sprinkle on the graves of his parents in their ancestral village. “That was a very big thing for me because they could not go back,” he said.

Mr. Namazaliyev recalled that his cousin, who was held by Armenian forces as a prisoner of war, was forced to work dismantling houses in Aghdam. The stone, famous for its golden color, was sold, he said.

Vagif Hasanov, 61, the mayor of Aghdam, was blunt in his view of why Armenian forces destroyed the city. The graceful 19th-century central mosque is the only building left standing in Aghdam. Defiled by Armenian graffiti, it was used as a cowshed.

“They wanted to hurt Turks and Muslims,” Mr. Hasanov said. Would he contemplate Armenians returning to live in the city? He answered with a curt “No.”

It was the purposeful destruction of the city and its heritage that upset Mr. Namazaliyev the most. The newspaper and its printing presses were gone, the cinema and the cultural center had vanished, and the central Allakbar mosque had been reduced to rubble. The fine vineyards had been uprooted and turned to dust.

“They even damaged the soil of Fizuli,” Mr. Namazaliyev said.

Azerbaijan’s officials have pledged to offer reconciliation and equal status to Armenians living on its territory, but few can see it working in practice.

Armenians believe they are targeted by Azerbaijanis because Armenians are Christian, and they fear Azerbaijan’s increasingly close alliance with Turkey, which continues to deny the Armenian Genocide that started in 1915.

“There is no reason for Armenians to want to live under Azerbaijani rule,” said Gerard Libaridian, a former adviser to Armenia’s first president and a retired professor of Armenian history at the University of Michigan. “It would be a domination. It would not be a governance.”

Many Armenians say they will keep fighting for Nagorno-Karabakh to be recognized as an independent country, despite an international consensus that the territory is part of Azerbaijan.

“How can we talk about justice?” said Garik Melkonyan, the director of the Armenian newspaper Aravot and a member of Colonel Aleksanyan’s unit of volunteer soldiers, rejecting the idea of reconciliation with Azerbaijan. “History shows that they can’t give us anything.”

Some Armenians now acknowledge that opportunities for a lasting peace were lost over decades of halting and unproductive peace talks.

Mediators tried to at least allow Azerbaijanis to return and resettle some of the outlying districts such as Aghdam and Fizuli. But for years Armenia held on to them, seeing them as a bargaining chip for independence or secession for Nagorno-Karabakh. Azerbaijan’s leaders considered, but in the end never could agree, to letting go of Nagorno-Karabakh.

The deadlock was complicated by Armenian politicians and activists around the world increasingly taking the position — disputed by Azerbaijanis — that all of the captured lands were rightfully Armenian. And when Prime Minister Nikol Pashinyan traveled to Nagorno-Karabakh — known in Armenia as Artsakh — in August 2019 and declared that “Artsakh is Armenia,” he sent the unmistakable message that the maximalist approach had won out.

For years, foundations funded by members of the Armenian diaspora have pushed for Armenian settlement of the occupied regions of Azerbaijan outside the core of Nagorno-Karabakh, arguing that they are also Armenia’s rightful lands.

“We have lived in this place for 5,000 years and we are only leaving it temporarily,” said the primate of the Armenian Church in Britain, Bishop Hovakim Manukian, in a goodbye sermon at the church in the village of Hak, or Minkend in Azerbaijani. “We have to come back. We have to come back and take over our land.”

A plaque in the church described centuries of pillaging and massacres by Turks and Kurds that wiped out the Armenian population of the area. The renovation of the church was financed by Virginia Davies, a lawyer in New York, in memory of her grandmother, a survivor of the Armenian genocide.

“For me and for all Armenians worldwide — and we are united — we cannot believe what has just happened to us,” Ms. Davies said in her farewell address at the church last month. “We will not cede our historic lands.”

But there was little mention of the ruins all around the village and the remains of houses dotting the hillside for miles along the road. Azerbaijanis’ desire to return to their homes here — even if it meant war — has long been a driving force in their country’s politics.

Now it is those ruins, visible across Nagorno-Karabakh and the territories controlled until recently by Armenia, that may feed a new wave of Azerbaijani anger at their neighbors as the damage and neglect of the last quarter-century comes into view.

Many Azerbaijanis say they are ready to accept Armenians remaining in Nagorno-Karabakh and even for Russian peacekeepers to protect them. But they insist on their territorial sovereignty and want to see a change in the general Armenian stance.

“Why should we fight, take guns and kill each other?” Teymur Haciyev, who was displaced from his home in the city of Shusha at the age of 9, said of the Armenians. “We really wish this was a good lesson for them. Maybe they will forget their dreams.”