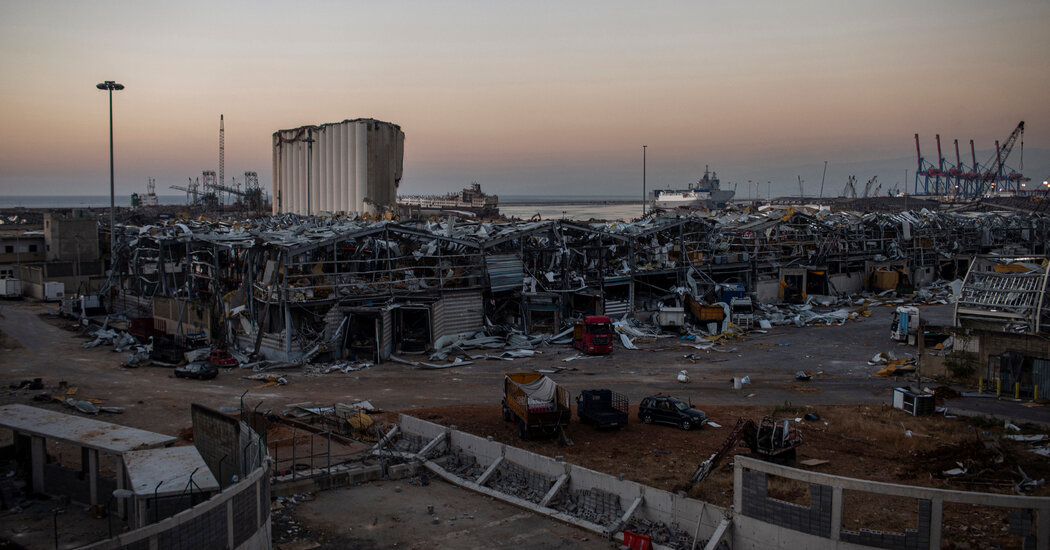 BEIRUT, Lebanon — The Lebanese judge investigating the massive explosion in the port of Beirut has charged the acting prime minister, Hassan Diab, and three former ministers with negligence in the August blast that killed nearly 200 people, the state-run National News Agency reported on Thursday.

The charges were a significant escalation in the effort to identify those responsible for the blast by targeting political figures who many in Lebanon had feared were too powerful to hold accountable.

But after the new charges were made public, Mr. Diab and a powerful former minister assailed the legitimacy of the inquiry, setting the stage for a battle between the judiciary and the politicians that could end up derailing the investigation.

Since August, a specially appointed judge, Fadi Sawan, has been leading an investigation into the explosion, the largest in Lebanon’s history. It left thousands wounded and did billions of dollars in damage to Lebanon’s capital.

While Judge Sawan’s work has largely been shrouded in secrecy, those arrested during the investigation were mostly low-level port, customs and security officials. That raised fears among blast victims and their families that the country’s political parties were protecting senior officials while letting less powerful people take the fall.

But on Thursday, Judge Sawan filed new charges of neglect and carelessness that caused hundreds of deaths against the four men and informed their representatives that he would question them as suspects next week.

Some legal experts applauded the move.

“This is a new era in Lebanon,” said Charles Rizk, who served as justice minister from 2005 to 2008. “We are shifting from politicians being able to do whatever they want to, maybe, a real investigation of what happened with this terrible accident.”

But two of the newly charged men not only denied the allegations, but attacked the investigation itself.

Statements on Thursday from Mr. Diab’s office accused the judge of violating the Constitution by circumventing the Parliament with his latest actions and suggested that the judge did not have the authority to charge a prime minister.

“He is confident that his hands are clean and that he has handled the Beirut Port blast file in a responsible and transparent manner,” Mr. Diab’s office said.

Mr. Diab did not make clear whether he would submit to the judge’s questioning, but said he had already said “what he has to say about this file, period.”

Another of the newly charged men, Ali Hassan Khalil, a former finance minister, took to Twitter to deny the allegations and accuse the judge of leaking confidential information to the news media and not following the law in his investigation.

“We will never accept that the truth is lost to baseless and weak accusations,” Mr. Khalil wrote.

In Lebanon’s judicial system, the special judge investigating the blast can file charges against individual suspects as he gathers information, but he only announces formal indictments once the entire investigation is done and ready to go to trial.

There is no time limit for him to complete the investigation, and other such cases have languished for years, with no conclusion ever reached.

Thursday’s charges bring to 37 the number of people that the judge has declared suspects in connection with the blast. Of those, 25 have been detained.

It was not clear why Judge Sawan charged only those four men or whether other charges were on the way.

Government documents obtained by The New York Times and other news outlets after the blast showed that warnings about the danger posed by the ammonium nitrate had bounced around the Lebanese state for years, crossing the desks of the port and customs authorities, three ministries, the commander of the Lebanese Army, at least two powerful judges, the president and the prime minister.

It appeared that Mr. Diab, who had served as prime minister for less than seven months when he and his cabinet resigned in August after the blast, had been charged because the documents showed that he had been warned about the chemicals weeks before the blast.

Three other men had served as prime minister since the chemicals arrived in Beirut in 2012, including Saad Hariri, the country’s most prominent Sunni Muslim politician. But no documents made public have shown that those men received warnings about the chemicals.

Those who lost loved-ones have called for revenge against officials who needlessly endangered the population or knew of the danger and did not do all they could to prevent it.

“Those involved in the blast should be executed. Prison is not enough,” said Zeinab Msheik, whose husband worked in the port’s grain silos and was killed in the blast. “I have three children who lost their father in seconds and they will live without him forever,” she said.

If the officials charged end up being convicted of negligence and carelessness, they would likely face prison terms of between three to seven years, according to Lebanese lawyers involved in the case.

Some Lebanese jurists and politicians argue that those who have served as minister, prime minister or president can only be tried by a special court that needs to be set up by the Parliament but which has never been activated.

Others say that official immunity does not cover crimes committed outside of someone’s official duties.

Mr. Rizk, the former justice minister, said that the size of the catastrophe caused by the explosion should wash away any talk of immunity.

“This country has been destroyed, and it is about time that people react in one way or another,” he said. “This goes beyond the legal niceties that the ministers and prime minister will try to invoke.”

But Lebanon has a weak central state and powerful political parties with standing militias that often operate outside of the law or manipulate state institutions to do their bidding. They could find ways to subvert the legal process to protect their people.

“Definitely, the political parties who are backing these ministers will react one way or another,” he said.

In addition to Mr. Khalil, the former finance minister, those charged include two former ministers of transportation and public works, Ghazi Zaiter and Youssef Finianos, the state news agency reported.

Mr. Khalil and Mr. Zaiter are both members of the Amal Movement, a Shiite political party, and close associates of its leader, Nabih Berri, who is also the speaker of Parliament.

In September, the United States Treasury Department sanctioned Mr. Khalil and Mr. Finianos for engaging in corruption and providing support for Hezbollah, the Iran-backed Lebanese Shiite militia and political party that the United States and other countries consider a terrorist organization.

Blast victims who have criticized the speed and scope of the investigation reacted with cautious optimism to the new charges.

“This is a good step, but we don’t want to be strung along with it,” said Mehieddine Lazkani, 28, a student whose father was killed in the blast. He worried that Mr. Diab, who does not appear to have the backing of a powerful political party, and others could be scapegoated for the actions of others.

“We want everyone to be held accountable, everyone who was responsible,” he said.