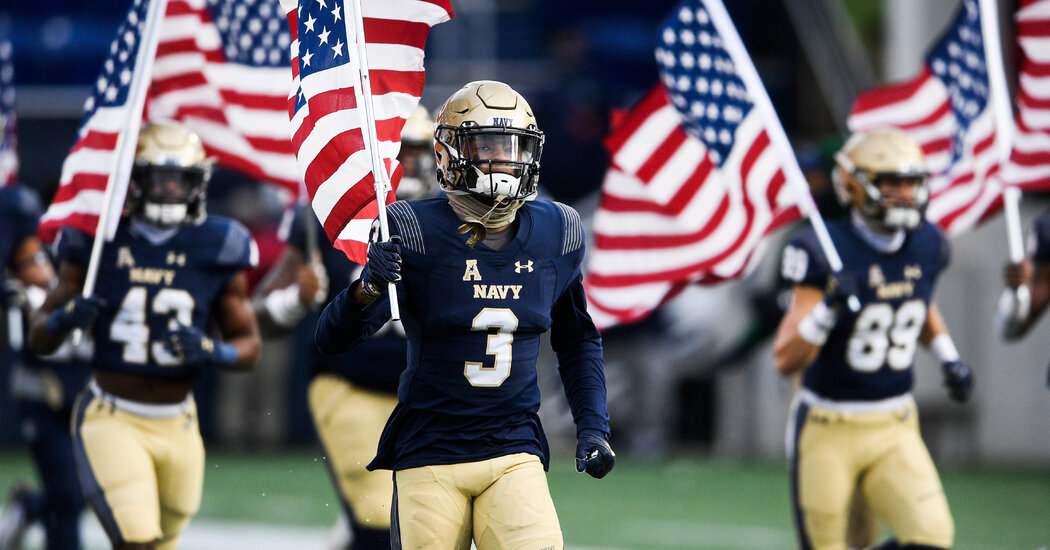 Cameron Kinley, one of the captains of the Navy football team, read the text on his phone in late October and refused to believe it.

A friend at the United States Military Academy had written that the Army-Navy game this year would not take place in Philadelphia, as usual. Instead, for the first time since World War II, Navy was going to play Army at the Black Knights’ home stadium in West Point, N.Y. The last time the game was not played at a neutral site was 77 years ago, in 1943.

Kinley, a starting cornerback and president of the Naval Academy’s senior class, remembered feeling confused and thinking, no way.

This couldn’t happen in his senior year, which was already filled with unrealized opportunities brought on by Covid-19. This just couldn’t be, when he and his teammates had targeted the Army-Navy game in Philadelphia, in front of 70,000 fans, as something they could look forward to at the end of this long, dark 2020 tunnel.

But it was true: Academy officials had moved the game — which takes place on Saturday on the banks of the Hudson River — because Pennsylvania has restricted large gatherings during the coronavirus pandemic. Army got the game because it was its turn to be labeled the home team.

The only spectators inside the 38,000-seat Michie Stadium will be the traditional dueling groups of Navy’s brigade of midshipmen and Army’s corps of cadets, each 4,300 strong and socially distanced, and a limited number of V.I.P.s, including President Trump.

“I was a little upset at first,” Kinley said, explaining that it seemed unfair that Navy would have to play on its archrival’s home field. “But then I kind of shifted my mind-set.”

The Navy team had no option but to pivot from feeling sorry for itself to feeling confident, because the players know a win against Army can turn around a season. Even a season like this one, when Navy’s record is 3-6 compared with 7-2 for Army. Even one marred by strict quarantines and postponed or canceled games, and 28 straight days without a game — a drought that lasted nearly the entire month of November.

And now the Navy players are heading into the game that means the most to them, by far, after only a week of preparation instead of the usual three. Two of its games were rescheduled from early November to the weeks before the Army game, after the coronavirus hit the Navy program and a multitude of players were caught up in contact tracing.

It’s a good thing then that Kinley, 21, and others on the team are exceptional motivators and leaders. Navy football has needed them in this uncertain and depressing year for the program, the entire Naval Academy and beyond.

Navy Coach Ken Niumatalolo said he wouldn’t be surprised if Kinley became superintendent of the Naval Academy someday. Kinley, though, has bigger plans: to be president of the United States. He already has his future mapped out. Myles Fells, a senior slotback, is included in the plans. They both want to run for local office and rise in the political ranks before meeting again.

“When the time is right, we do plan on getting back together and making a push for the national ticket,” Kinley said.

This year has been good preparation for what might lie ahead. Kinley has taken the initiative with some fellow seniors to call team meetings to discuss issues like the need to wear masks and to socially distance. He helped organize discussions about this summer’s nationwide racial unrest and police brutality. His takeaway from 2020 will be summed up in his graduation speech in the spring.

The theme will be “get comfortable with being uncomfortable,” a mantra that he remembers hearing during his grueling plebe summer and that is particularly applicable to this psychologically challenging year.

“We’ve been living in an uncomfortable environment for months because of Covid, and we can’t control that,” said Kinley, the first football player to be president of the senior class in about 30 years. “We’ve just got to find a way to make things work.”

Kinley, who is from Memphis, and the other Midshipmen were sent home last spring when the first wave of the virus hit. They continued their studies by video. When they returned to campus in early summer, they quarantined inside their dorm rooms for two weeks.

The military imposed strict rules and was able to enforce them: No one could visit other students’ rooms or stray outside the gates, even on a surreptitious pizza run or for a jog. Even after that initial quarantine, the midshipmen were allowed off campus in Annapolis, Md., for only a handful of days.

Days and nights in lockdown have taken a toll on the players. So have the game postponements and cancellations, which included Navy’s annual game against Notre Dame, which was scheduled for Aug. 29 in Dublin. It would have been Kinley’s inaugural trip out of the United States.

Niumatalolo, who has been at Navy for 22 years, said this was the first time he had had to deal with pervasive mental health issues, like anxiety and depression, on one of his teams. He has engaged sports psychologists and chaplains to help, and acknowledges that some other coaches might have done a better job addressing the issues.

“Mental health was a real deal with our players, with society,” he said, adding that the team did some things just to get the players outside so they could feel the sun on their faces. “Early on we were dealing with a lot of that.”

Kinley felt so boxed in at one point that he texted his family on their group chat with the words, “Free Cam!”

“He felt trapped,” his mother, Candace Kinley, said. “We just told him that he could do this. It would soon be over. Better safe than sorry. That’s all we could do from so far away.”

This year, Kinley said, was much harder than even his worst struggles in previous years, when at times he would call home crying because he didn’t think he was tough enough to make it to graduation. He called this year “the toughest time that I’ve experienced in my life.”

“I’ve been depressed and sad, all mixed emotions,” he said. “But being there for other people and knowing I’m not going through this alone has helped.”

Knowing that obstacles and distractions are not insurmountable also helped, Candace Kinley said.

Cameron overcame a stutter as a boy, realizing he was good at public speaking when he took an Introduction to Speech class in sixth grade. The title of a speech that wowed the crowd then? “Navy Athletes and Why They are Unique.” His mother shared a copy of it.

“When a teammate makes a bad play, they do not go to the player and get mad,” he wrote for the teacher, Mrs. Gibson. “Instead they invigorate him by saying, ‘You will get the next play.’ That is showing maturity.”

Maturity is also being able to walk through the gates at West Point, head held high and feeling confident, though Navy is the underdog in more ways than one. It is trying to regain the upper hand in the rivalry after its 14-game winning streak against Army ended in 2016. The Midshipmen have won only one of the last four Army-Navy games.

Kinley can’t forget how it felt to win last year’s game. It was his greatest moment at the Naval Academy, he said, other than when he passed his 400-meter swim test. He is looking for a similarly glorious way to end this trying year.

“Simply put, beating Army heals all the pain,” he said.