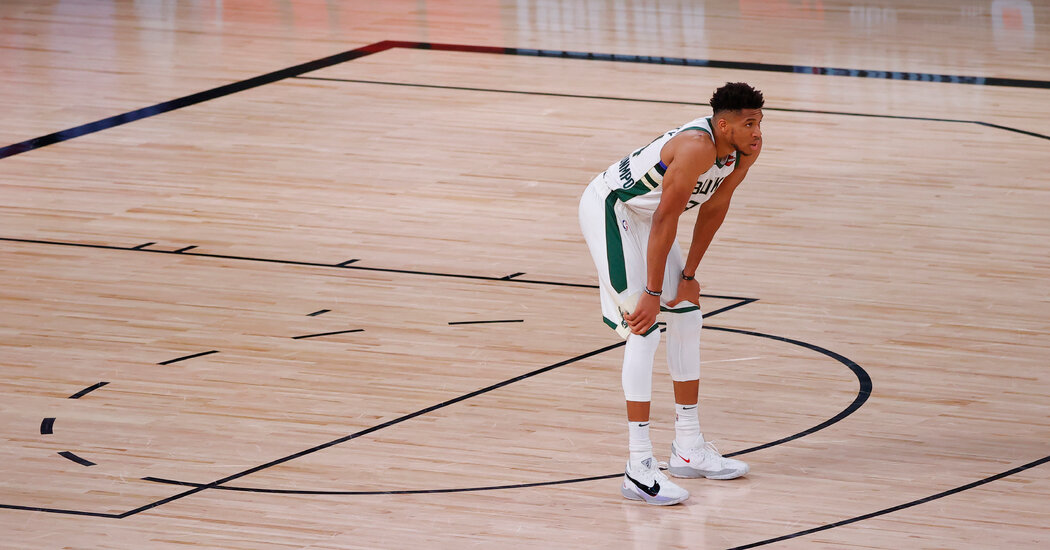 When the Milwaukee Bucks showed up for training camp on Sunday, Khris Middleton presented his teammate Giannis Antetokounmpo with a gift for his 26th birthday: a pen. Antetokounmpo did not understand its significance at first.

“Then I was thinking about it, and I realized he was wanting me to sign the contract,” he said.

Antetokounmpo got the joke. He thought it was funny. But as more teammates arrived and they continued to bestow him with pens, he apparently stopped laughing.

The problem is that Antetokounmpo has not used any of them for their intended purpose. He has until Dec. 21 to sign a so-called supermax contract extension that would be worth about $227 million and would run through the 2025-26 season. Barring that, or a more modest extension, he would become an unrestricted free agent next summer.

Waiting is the hardest part in Milwaukee, which has gone 49 years since the Bucks won their only N.B.A. championship and now has no shortage of Greek Freak agita. Fans have watched Antetokounmpo blossom from a spindly-limbed teenager into one of the league’s most dynamic forces, a back-to-back winner of the N.B.A.’s Most Valuable Player Award.

Now, as the days pass and the deadline to resolve his contract situation comes into sharper focus, Antetokounmpo is holding the city in a state of suspense.

Frank Madden, a management consultant and longtime Bucks fan who has written and co-hosted podcasts about the team, noted how a cloud had been hanging over the franchise in recent months because of the uncertainty surrounding Antetokounmpo, a cloud that had darkened in the wake of another early exit from the playoffs.

“But now we’ve reached this inflection point where it’s not just about the national media saying, ‘Does he want to leave?’” Madden said in a telephone interview. “It’s also Giannis opening the door to that — or at least not slamming it shut by signing the extension.”

Much of that feeling stems from comments that Antetokounmpo made — or chose not to make — on Wednesday at a virtual news conference. In addition to revealing that he had a new collection of unused pens, Antetokounmpo was noncommittal about his extension. He said he was leaving it up to his agents.

Antetokounmpo has options. He could sign the supermax deal by Dec. 21. He could sign a shorter-term contract — there is no deadline for that style extension — for less money. Or he could opt not to sign anything at all, which would not necessarily preclude him from signing a supermax extension next summer.

But it would also lead to several more months of questions and communal hand-wringing — for fans and for the Bucks’ front office, which would need to weigh whether the team would be willing to risk letting him walk away next summer without seeking any compensation for him in a trade.

“For a guy who says he just wants to focus on basketball, it would be such a distraction,” Bart Winkler, the host of a morning sports-talk radio show in Milwaukee, said in a telephone interview. “I think we’d all been assuming, whether it was going to be a short contract or a super max, that somehow, someway, he would sign his next contract to stay in Milwaukee. And now, for the first time, there’s some real concern that he might not.”

Other cities have gone through similar ordeals with marquee players. Consider Oklahoma City’s fractured relationship with Kevin Durant after he decided to jump to the Golden State Warriors as a free agent in 2016, or Cleveland’s more nuanced ties to LeBron James, who paralyzed that city more than once as he weighed his future.

“I think it kind of comes with the territory of being a fan of a team that has an elite player,” Madden, the management consultant, said, “and doubly so if you’re following a small-market team. Unfortunately, when your team has a superstar, there’s this double-edged sword of expectations and rumors about where they may go next on the N.B.A. roulette wheel, especially given how transaction-centric the league has become. But as Bucks fans, we haven’t had to go through this pre-Giannis.”

Or at least not since 1975, when the Bucks fulfilled Kareem Abdul-Jabbar’s request to be traded. Abdul-Jabbar had led Milwaukee to a championship in 1970-71 but grew frustrated by the small market.

Antetokounmpo is beloved in Milwaukee and across Wisconsin. The sports landscape there is still dominated by the N.F.L.’s Green Bay Packers, but Antetokounmpo has helped lift the Bucks to new levels of popularity since the team drafted him with the 15th overall pick in 2013.

Beyond his talent, Antetokounmpo instantly endeared himself to fans with his charm, his humor, his community outreach and his seeming innocence. As a rookie, he delighted in tasting his first fruit smoothie. “MAN GOD BLESS AMERICA,” he wrote on Twitter, complete with a smiley face emoticon.

Now, he has his own signature sneaker line with Nike. His rags-to-riches story is being made into a motion picture for Disney. And by extending his contract negotiations and deflecting questions about them, he is finally treating basketball like something other than a game: He is, in his own way, acknowledging that it is a business.

The stakes could not be higher. The Bucks have finished each of the past two seasons with the league’s best regular-season record while falling short in the playoffs. In September, they were dominated by the Miami Heat in their Eastern Conference semifinal series. That was the moment when the city’s collective concern went from a simmer to a boil.

During an abridged off-season, the Bucks improved their backcourt by acquiring Jrue Holiday, one of the league’s best two-way guards, from the New Orleans Pelicans. As a part of the deal, the Bucks sent the Pelicans three future first-round picks. Holiday is a terrific player but the Bucks overpaid to get him, mortgaging a big chunk of their future because they were determined to build out their roster around Antetokounmpo and, by extension, make him happier.

“The bottom line for Bucks fans is we know if we don’t win a title with Giannis, we won’t have one here for a long, long time,” Winkler said. “That’s why everyone is so tense.”

Complicating matters, the Bucks appeared to bungle a deal to land Bogdan Bogdanovic, a forward who wound up with the Atlanta Hawks.

“Nobody wants to win a championship more than me,” Antetokounmpo said. “I can guarantee you that.”

Now, as he mulls his contract, some fans face decisions of their own. Matt Aleithe, a small-business owner from just outside Milwaukee, said he was nearing a deadline to renew his season tickets for 2021-22, when arenas would presumably welcome fans back. Aleithe said he was pleased with the Bucks’ off-season moves — “The team’s better than they were at the end of last season,” he said — but he could not help but wonder whether Antetokounmpo would still be playing for them in a year.

“It’s kind of a big commitment, being a season-ticket holder,” Aleithe said. “There’s just a little more angst among fans these days.”