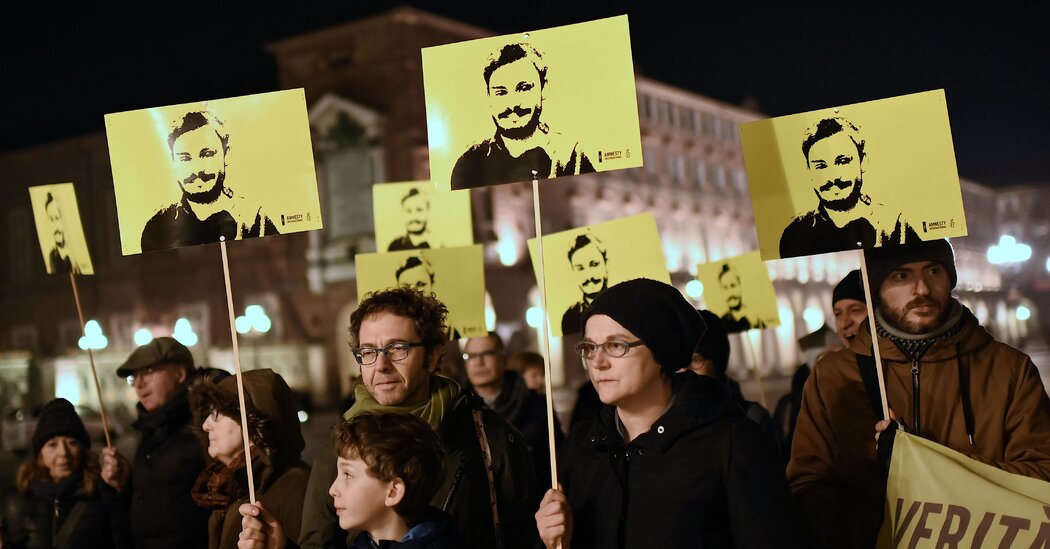 Italy announced on Thursday that four officials with the Egyptian National Security Agency had been charged in connection with the abduction and murder of an Italian doctoral student in Cairo in 2016.

The indictment, which accused the four officials of the “aggravated kidnapping” of the student, Giulio Regeni, with one also charged with “conspiracy to commit aggravated murder,” was a major turn in a case that has gripped public attention in Italy.

“This is an extremely important result,” Michele Prestipino Giarritta, Rome’s chief prosecutor, said in a hearing before an Italian parliamentary commission on Thursday. “Prosecutors did everything they could to investigate. We owed it to Giulio’s memory.”

The killing in the Egyptian capital of Mr. Regeni, a 28-year-old Ph.D. student at Cambridge University in Britain, originally strained diplomatic relations between Rome and Cairo. Egypt initially made some efforts toward cooperation, but Italian investigators soon found themselves almost alone in trying to determine the circumstances of Mr. Regeni’s death.

Although the four suspects are unlikely to appear in court, a trial is the ultimate resort for the Italian authorities to shed some light on Mr. Regeni’s case.

Paola Regeni, the victim’s mother, urged the Italian authorities to put more pressure on Egypt. “Why was Giulio, an Italian citizen, not saved in a country that was a friend and still is a friend?” she asked in televised remarks on Thursday.

The four officials charged have 20 days to submit statements or ask to be heard in the case. After that, a judge will decide whether to move forward with a trial. If approved, it would be expected to take place in Rome next year.

Prosecutors in Egypt have already made clear that they will not be following suit, announcing in a statement last week that they had “emphatic reservations” and “did not support” the Italian decision to pursue charges, which the Egyptians said were made “without solid evidence.”

“We deem to have gathered unambiguous and meaningful evidence on the responsibility of the suspects,” Mr. Prestipino Giarritta, said on Thursday.

He added that, despite the “particularly laborious, difficult, complex and not fully accomplished relationship” with the Egyptian authorities, his investigators had been able to reconstruct the context in which Mr. Regeni’s killing had taken place, with solid evidence.

The Rome prosecutor’s office said in a statement on Thursday that it would seek to try four officials of the Egyptian National Security Agency: Maj. Madgi Ibrahim Abdelal Sharif, Maj. Gen. Tariq Sabir, Col. Athar Kamel Mohamed Ibrahim and Col. Uhsam Helmi. All four would be prosecuted on the abduction charge, with Major Sharif also indicted on the murder charge.

Italian prosecutors aim to prove that Major Sharif asked three informants to follow Mr. Regeni in late 2015. For months, Major Sharif was in constant contact with an Egyptian friend of Mr. Regeni, Noura Wahby, who saw or chatted with him almost every day, and with his roommate, Mohamed El Sayed, a lawyer who at Mr. Sharif’s pressure started inviting Mr. Regeni to go out in the evening.

Major Sharif also provided the leader of an Egyptian street-vendor union the equipment to record meetings with Mr. Regeni, according to the Italian case.

A witness who claimed to have overheard a conversation between Major Sharif and a Kenyan security agent in the summer of 2017 said that Major Sharif had bragged of having abducted Mr. Regeni and beaten him to extort information, believing that he was a foreign spy, “maybe from the C.I.A. or the Mossad,” Sergio Colaiocco, the leading Italian prosecutor in the case, said on Thursday, citing testimony independently acquired by his office.

In the two months after Mr. Regeni’s body was found on the side of a road, the Italian and Egyptian authorities seemed to be cooperating fully. Eight Italian police officials landed in Cairo days after the discovery and worked alongside investigators from the National Security Agency for weeks. In that initial phase, the Egyptian service “categorically ruled out the involvement of the Egyptian security agencies in what happened to Giulio Regeni,” Mr. Colaiocco said last year in a hearing before the parliamentary commission.

But the results of an autopsy carried out in Rome had already started to show some weaknesses in that claim. The examination proved that Mr. Regeni had died from a blow to the neck that caused a fracture of his cervical vertebrae, a sign of an intentional strike to his head. His body also showed signs of extensive torture, including broken teeth and fractures to his shoulders, wrist, feet and several fingers.

As the Italian investigators waited for a flight home in March 2016, the Egyptian authorities announced that they had killed four members of a criminal gang who they said were responsible for Mr. Regeni’s death. They said they had found Mr. Regeni’s passport and a bank card in one of gang members’ homes.

Most people outside Egypt regarded it as an attempted cover-up. But Egyptian prosecutors said as recently as last week that there was “solid evidence” that the gang had robbed Mr. Regeni.

Mr. Regeni’s family, however, has said that they do not recognize all the items purported to have belonged to him.

Mohamed Lotfy, executive director of the Egyptian Commission for Rights and Freedoms, which has represented the Regeni family in Egypt, said, “It just proves that — even in a high-profile case like this one, with so much interest and with a government behind it — even then, the Egyptian authorities are unwilling to hold to account those who made someone disappear.”

“So imagine what’s it like for Egyptians,” he added.

Italian investigators wanted to retrace Mr. Regeni’s last steps using cellphone signals from towers near his apartment and near a metro station where his phone was last located. But the Egyptian authorities were hesitant to produce the documents for privacy reasons.

In the fall of 2016, the Egyptian general prosecutor, Nabil Sadek, flew to Rome twice, bringing witness statements, some cellphone data and hidden camera recordings of Mr. Regeni in meetings in the days before he disappeared.

Mr. Sadek met with Mr. Regeni’s family in Rome, calling him a “friend of Egypt,” and assured them of the utmost collaboration on the Egyptian side.

But Italian investigators said that collaboration with the Egyptian authorities dropped off after that period.

For 27 months, Italian prosecutors struggled to acquire footage from surveillance cameras inside Cairo’s metro stations. The Egyptian authorities’ delay in acquiring the video meant crucial images had been overwritten or erased.

When Italian experts finally got the recovered footage, three crucial portions were missing. One was the period between 7:49 p.m. and 8:08 p.m. on Jan. 25, exactly when Mr. Regeni would have been in the subway.

Toward the end of 2017, Italian investigators sent a 75-page file on their suspects to Egypt, and Rome’s chief prosecutor at the time, Giuseppe Pignatone, flew to Cairo to illustrate the findings with the file translated into Arabic. Egyptian investigators interrogated some of the suspects, but gave no hint that they would prosecute anyone.

For two years, “no new document arrived from the Egyptian authorities,” Mr. Colaiocco told the parliamentary commission on Thursday.

Yezid Sayigh, a senior fellow at the Carnegie Middle East Center in Beirut, Lebanon, who studies Mr. el-Sisi’s relationship with intelligence services, said the Egyptian president had plenty of reasons to protect the security agencies who help keep him in power. But, Mr. Sayigh said, Italy was also to blame for letting Egypt zigzag its way out of accountability.

“The Italian government could have done a lot more to tackle this seriously, instead of making it a domestic political issue,” Mr. Sayigh said. “And, of course, the Italian government has major commercial interests in Egypt, and the last thing they wanted to do was to make problems for themselves.”

Italy is not alone in struggling to match rhetoric to behavior when dealing with Egypt. The United States and other Western countries have long seen Egypt as an important bulwark in the Middle East, helping in regional relations with Israel and in combating terrorism.

“The bottom line that the Egyptians have experienced for the last 40 to 50 years working with Western governments is that they will always be let off the hook,” Mr. Sayigh said, “and not just on human rights, but on basically everything.”