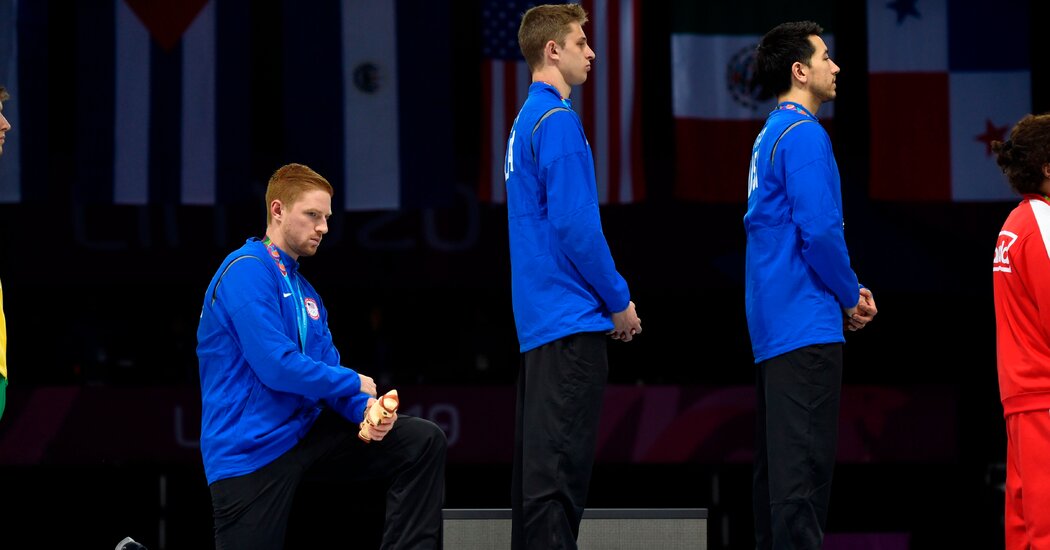 The United States Olympic and Paralympic Committee announced on Thursday that it would no longer punish athletes who participate in peaceful protests, such as kneeling or raising a fist at a medal ceremony, putting itself in direct conflict with the longstanding policy of the International Olympic Committee.

The U.S. committee’s announcement was made in conjunction with a formal recommendation from a council led by American athletes that asked the I.O.C. to change its policy, known as Rule 50, while working on justice causes. The policy has come under heightened scrutiny as mass protests calling for racial equality, including demonstrations by professional athletes, have spread widely this year in the United States and other countries.

“It is critical to state unequivocally that human rights are not political, and peaceful calls for equity and equality must not be confused with divisive demonstrations,” Sarah Hirshland, chief executive of the U.S.O.P.C., said in a letter on Thursday to American Olympic athletes.

Rule 50 of the Olympic Charter prohibits individuals from demonstrating or displaying “political, religious or racial propaganda” around Olympic sites during the Games. It was invoked, for example, at the 1968 Summer Olympics in Mexico City, when the American sprinters John Carlos and Tommie Smith were expelled from the Games for raising their fists on the medals podium during the playing of the U.S. national anthem.

For now, the change in policy from the U.S.O.P.C. does not mean that American athletes will be free to protest at the Summer Olympics in Tokyo next year without the threat of punishment. Rule 50 offers no specific guidelines for punishing athletes, only stating that discipline should be determined on a case-by-case basis with cooperation from national governing bodies and international sports federations.

In practice, the I.O.C. has historically called on individual organizing committees to dole out punishments for violations. As recently as last year, for instance, the U.S.O.P.C. reprimanded the fencer Race Imboden and the hammer thrower Gwen Berry, who knelt and raised a fist during their medal ceremonies at the Pan American Games. Both were given formal warnings and placed on probation for 12 months after those demonstrations.

The U.S.O.P.C. has since apologized for those punishments, and on Thursday formalized its pledge not to punish athletes for similar acts of peaceful protest in the future.

But the I.O.C. could still bar or expel athletes from the Games or strip them of their medals should they protest.

The I.O.C. is undergoing its own review of the rule — it has organized forums and surveys with Olympians around the world — and some observers said the U.S.O.P.C.’s announcement could significantly shape that conversation.

Because the U.S. is a big market and a big national Olympic committee, “it does make a difference in terms of what the discourse is going to be at the I.O.C. around this issue,” said Han Xiao, the chairman of the U.S.O.P.C.’s athletes’ advisory council. “Especially if other countries with systemic racism or marginalized populations follow the U.S.O.P.C.’s lead and feel more emboldened to take a similar stance.”

“Things can change quickly,” he added, “and a lot comes down to how much the I.O.C. wants to fight it.”

The U.S.O.P.C.’s split from the I.O.C. on this rule comes at a delicate time, with the Olympics set to take place in Los Angeles in 2028. Still, an increasing number of people around the world and across sports have been publicly calling for some sort of change.

“I support the right of athletes to be a part of the world we live in, and I don’t think we can have it both ways,” Sebastian Coe, the president of World Athletics, said during a conference call with reporters on Thursday. “As long as they do it respectfully, with due deference that there will be other athletes on that podium with them, I am not going to get sleepless nights on this.”

In October, Thomas Bach, the I.O.C. president, reiterated his position that he did not want the Olympics to become a “marketplace of demonstrations.” The I.O.C. clarified its rule last January, specifying that kneeling or raising a fist during a medal ceremony was a form of demonstration that would not be tolerated.

Those guidelines rankled some Black athletes in the United States who thought they were unfairly singled out by the language that was used.

“When you specify kneeling and you talk about fists when you’re defining what protest can and can’t be, you’re saying you don’t want Black athletes to come,” Moushaumi Robinson, a gold medalist in track and field who leads the Team U.S.A. Council on Racial and Social Justice, said in an interview earlier this year.

“The podium belongs to the three athletes who make it to that spot,” she added. “Once the clock is at double zero, once the race finishes, the three individuals or three teams, they own that time, and it is their time to express or not express, to do or not do, to stand or not stand, in that moment that they’ve earned.”

Robinson and the council, in their formal recommendation to the I.O.C. on Thursday, wrote that current rules “target historically marginalized and minoritized populations within the Olympic and Paralympic community.”

The group called for amendments that would allow athletes to comment on social justice and human rights initiatives while still preventing hate speech and discriminatory language.