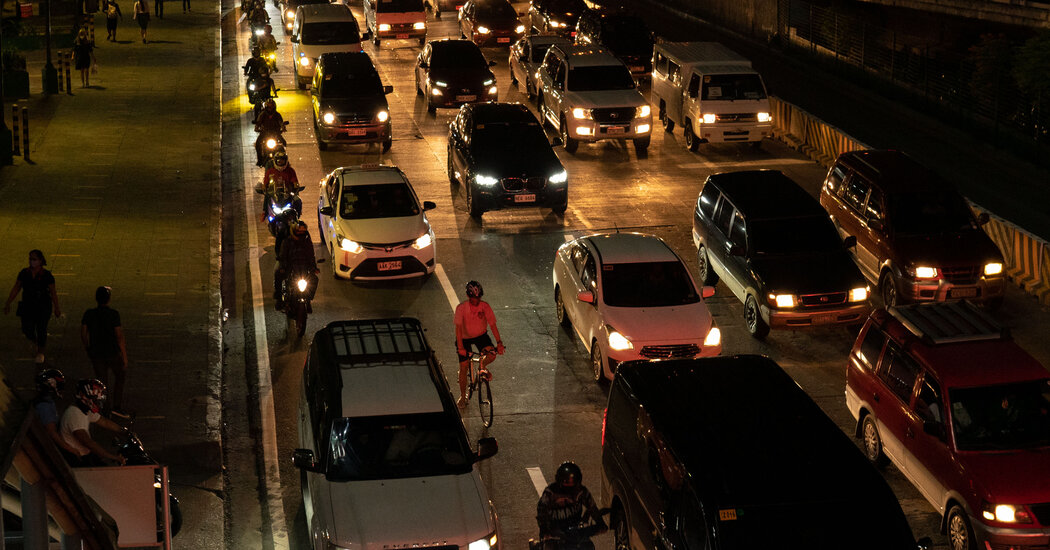 MANILA — Nikko Flores bought his first bicycle with borrowed money when public transit was restricted in the Philippine capital because of the coronavirus pandemic.

The secondhand mountain bike cost nearly half a month’s salary, but it proved essential for getting across metro Manila, a sprawling urban area with nearly 14 million residents and notorious traffic jams.

Now, Mr. Flores, 23, sees cycling not only as a logistical convenience, but also as a means of personal liberation.

“You just want to go farther and farther away,” he said on a recent morning after working a graveyard shift as a security guard at a Manila condominium. “It’s really fun, like you’ve unlocked something overwhelming.”

As the need for social distancing forces governments around the world to reduce public transportation service, city dwellers from Paris to Tokyo are hopping on bikes instead. Global bicycle sales have surged to the point where even Giant, the world’s largest bike maker, has struggled to fill orders.

Manila’s cycling surge is notable because the Philippines has not only one of the highest coronavirus caseloads in Asia — more than 445,000 infections, according to a New York Times database — but also some of the region’s worst urban congestion.

Last year, a study by the Asian Development Bank found that metro Manila, an area roughly six times the size of Paris, was the most congested of 24 cities that it surveyed across South and Southeast Asia. Japan’s development agency estimates that the cost of traffic to Manila’s economy is more than $72 million, or 3.5 billion Philippine pesos, a day.

Metro Manila was shuttered in March as part of a wider lockdown of Luzon, the country’s most populous island, imposed by President Rodrigo Duterte. When stay-at-home orders began to lift a few months later, public transit was still operating at limited capacity.

Some regular bus and train commuters started driving instead. But for many Manila residents, walking or cycling became their only means of getting to work.

Biking on Manila’s snarled, potholed roads can be hazardous, in part because some drivers regard cyclists as obstacles. Sidewalks, too, are often clogged with street vendors and makeshift parking areas. The Manila metropolitan area had 19 bicycle-related fatalities last year, according to official figures. By comparison, New York officials counted 28.

On his first few rides, Mr. Flores, who bought his mountain bike in August, came close to having an accident while weaving through cars in the sweltering heat.

“Which lane is safe?” he wrote in a Facebook group called Bike to Work that now has more than 7,000 members. “Cars honk behind me and I lose my balance.”

Another user, Mamer Toldo, replied: “It’s better if they’re honking. At least you know they see you.”

Another challenge was keeping his bike in working order when parts were in high demand. His chain kept breaking, and he had to sell his video game collection for about $20 to buy cycling lights and to replace his brakes.

Eventually, though, he settled into a routine of sorts — and his crosstown trips began to feel like major victories.

“For others it would be a small achievement, but for me it’s huge because I managed to do it even though I was afraid of being on the road,” Mr. Flores said.

The government has been gradually easing restrictions on public transit in metro Manila since June. But by now, Mr. Flores and many other commuters are hooked on cycling, and some downtown streets where vendors once sold vegetables and electronics are filled with bikes and accessories for sale.

The biking boom prompted Philippine officials to announce a plan in August for building a 400-mile bike lane network that would be financed through a pandemic-related stimulus fund.

“Even I bought a bike so I would personally feel and understand the needs of our cyclists,” Mark Steven Pastor, an assistant transportation secretary, said by telephone.

Toix Cerna, a cycling advocate in Manila, said that while the bike lane plan was a major milestone, there was still widespread skepticism among local officials toward biking as a means of transport.

“We will need to continue the campaign to change mind-sets,” she said. “Personally, I still feel that we’ll have to try to win this thing every year — every time it’s budget season.”

Mr. Flores, the security guard, said that he planned to take biking excursions outside the city on his days off. For now, though, he mostly commutes on roads swarmed with cars, buses, motorcycles, tricycles and jeepneys, the locally produced passenger trucks that are fixtures of Manila’s pollution-choked streets.

Before he sets out in the early evening, he checks his bike chain and puts on his helmet. Then he starts pedaling south toward downtown from his home in Caloocan City, a part of metro Manila — a journey that takes him under train tracks, into drainage culverts and across chaotic intersections.

When he arrives at work about 40 minutes later, he changes out of his cycling clothes and irons out the creases in his work uniform. During breaks, he pops outside to make sure that his bike hasn’t been stolen, or to cover it with a recycled plastic laundry bag to protect it from rain.

When his shift ends around daybreak, he cycles home, where he washes his uniform and falls asleep. The intensity of the traffic fluctuates, he said, but one thing is constant:a lingering fear of being sideswiped by a car.

“I pray for my safety,” he said. “My mind is focused on the road. My eyes move right and left.”