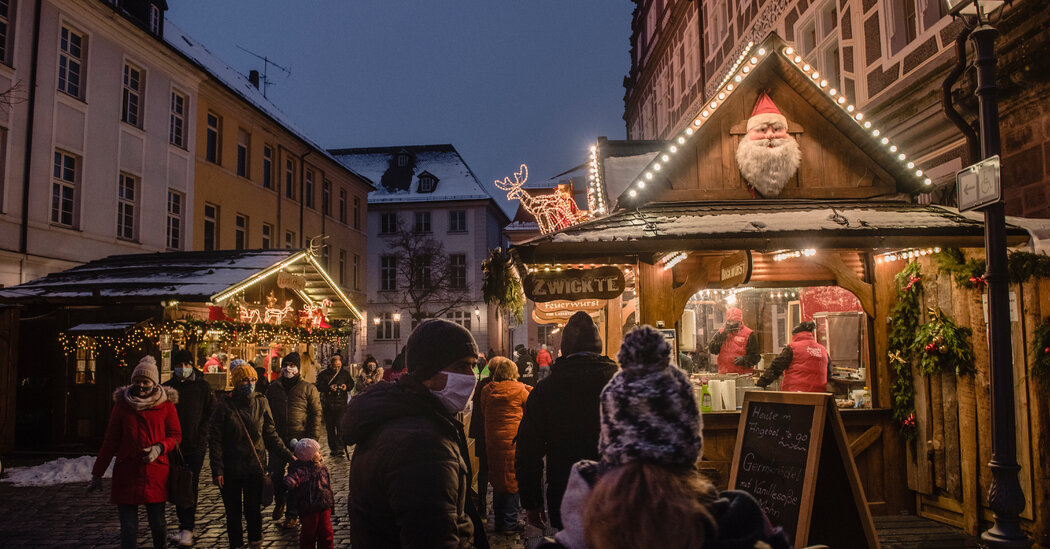 BERLIN — Germans will be forced into a strict lockdown over Christmas, after weeks of milder restrictions on public life failed to slow the spread of the coronavirus, leading to record numbers of new infections and deaths, Chancellor Angela Merkel announced on Sunday.

Starting on Wednesday, nonessential stores, schools and hairdressers will be required to close, and companies will be encouraged to offer employees an extended holiday break or allow them to work from home. The number of people allowed to meet privately — including over Christmas — will also be further tightened. New Year’s celebrations outdoors will be all but prohibited, with the sale of fireworks and gatherings in public both banned.

“All of this will impact the holidays, we know that, but we have been forced to take action and that is what we are doing now,” Ms. Merkel said at a news conference announcing the measures, which are to remain in place through Jan. 10.

Germany earned widespread recognition for its success in halting the spread of the virus in the spring through an aggressive approach informed by science and carried out through contact tracing, early and aggressive testing and coordinated nationwide restrictions. But since then, the country has stumbled badly, allowing a false sense of complacency to set in. Leaders of Germany’s 16 states — responsible for implementing public health policy — have also been resistant to following calls from the chancellor and medical experts for another lockdown this fall.

In late September, Ms. Merkel warned that if Germany did not take more radical action, the numbers of new infections could rise to 19,000 per day. Roughly one month later, the chancellor’s warning came to pass as the country experienced more than 21,500 new infections within a 24-hour period.

Instead of falling in line with other European countries — including Britain, France and Ireland — that imposed hard restrictions as their numbers rose this fall, Germany’s governors squabbled over how far regulations should be allowed to go. The result was a raft of more flexible, softer measures nationwide — named “lockdown light” by the German news media — that closed bars, restaurants, theaters and cinemas but allowed small groups of people to meet and left nonessential stores, schools and hotels all open.

The aim had been to reduce social contacts by 75 percent, Ms. Merkel said when they were announced in late October. But with more and more people venturing out for Christmas shopping and people gathering at outdoor stands to buy things like the hot mulled wine that is a seasonal ritual, a reduction of only 40 percent was achieved, Ms. Merkel said on Sunday.

“The ‘lockdown light’ had an effect, but it was not enough,” Markus Söder, governor of Bavaria, said. “The situation is out of control.”

New infections and fatalities from the coronavirus have continued to climb in recent weeks, with outbreaks concentrated among older people, especially those living in nursing homes and other care facilities. Germany recorded 20,200 new infections on Sunday, an increase of more than 2,000 compared with the same day last week, according to data gathered by the Robert Koch Institute, Germany’s public health authority.

The country has lost 21,787 people to the virus, and the number of people being treated in intensive care is increasing, the institute said in a brief published Saturday that warned that the rate of new infections remained dangerously high and posed a strain to the country’s health system if not brought under control.

“If we are not careful, Germany will become the problem child of Europe,” Mr. Söder said.

Last week Germany’s National Academy of Sciences called for a “decisive and united” lockdown over the holidays. On Wednesday the chancellor made an unusually emotional plea to Germans to listen to the scientists. The normally reserved chancellor stressed her own training as a physicist as she called on people to reduce their social contacts before the holidays to protect older and more vulnerable members of society and their own families.

“If we have too many contacts before Christmas and then later this becomes the last Christmas we celebrate with our grandparents, then we missed something,” Ms. Merkel said. “We would do well to really take seriously what scientists tell us.”

As Germany is preparing to all but shut down, some other European countries are relaxing their own rules. France has lifted its curfew and reopened nonessential stores, Ireland has allowed restaurants, stores, hotels and bars to reopen and people to gather outdoors, and England is preparing to ease restrictions on private gatherings to allow people from as many as three households to mix from Dec. 23-27.

Germans have grown increasingly critical of the government’s handling of the pandemic, with demonstrations against the measures growing from several hundred to several thousand since late August. Protesters include a mix of people opposed to vaccinations, angry citizens and right-wing extremists. A demonstration planned for Saturday in Dresden by critics of the coronavirus measures was banned by the city authorities. They cited concerns for public health, a decision that was upheld by the country’s highest court.

Businesses and freelancers affected by the restrictions will receive compensation from the government for up to 90 percent of fixed costs, or up to 500,000 euros, equivalent to $605,000, the country’s finance minister, Olaf Scholz, said on Sunday. “There will be a very comprehensive package of economic and interim aid,” estimated at 11 billion euros a month, he said.

Forcing stores to shut their doors in the final weeks of the Christmas shopping season is a blow to many of the country’s smaller and midsize businesses that have already struggled to recover from the more strict lockdown imposed earlier this year.

“The faster we bring down the numbers of new infections, the faster our economy will be able to recover,” said Peter Altmaier, Germany’s economy minister, who called the new restrictions “tough, but necessary.”

Although a German company, BioNTech, along with American pharmaceutical company Pfizer, developed the first vaccine against the coronavirus to be approved in several countries, including Britain and the United States, Ms. Merkel said that Germany would wait for approval from European authorities before it would begin administering injections. The European Medicines Agency has said it expects to approve the BioNTech-Pfizer vaccine by Dec. 29.