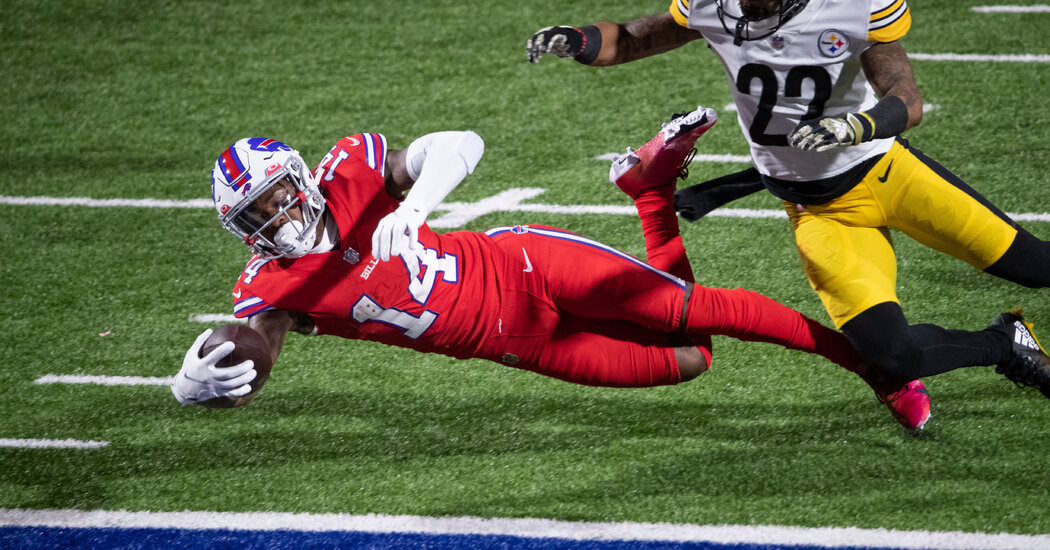 After the interception that cemented Buffalo’s standing among the N.F.L. elite, the Bills’ defense assembled and jogged the remaining length of the field together, toward the end zone and the cameras and oceans of blue seats. It was midway through the fourth quarter Sunday on a night at Bills Stadium that begged for fans, dancing in the aisles to “Shout” and swilling their Labatts and celebrating a victory that reverberated far beyond western New York.

Buoyed by a defensive touchdown just before halftime and two scores immediately after the break, the Bills toppled the Pittsburgh Steelers, 26-15, with the outcome evoking a pebble skimming across a pond.

One wave fanned out from the home locker room, where a most dangerous team continued to gain confidence as it approaches a prize that has eluded it since before its cherished quarterback, Josh Allen, was born: With a two-game lead over Miami, the Bills (10-3), who have the franchise’s best record through 13 games since 1991, could clinch their first A.F.C. East title in 25 years as soon as next week.

Another ripple registered throughout the Steelers (11-2), who only a week ago were unbeaten — imperfect but unbeaten. Pittsburgh has lost two straight, and if Buffalo is soaring as the playoffs draw near, then the Steelers are flailing, as if grasping for a light switch in the dark, struggling without an explosive offense.

But the biggest ripple of all jostled the A.F.C. landscape, where the Steelers dropped behind the Kansas City Chiefs (12-1), who won in Miami, in the race for the top seed in the playoffs. Even if the Bills’ playoff positioning itself didn’t change, they reasserted their place within that hierarchy.

As the N.F.L. has evolved, the best teams are those with dynamic passing offenses and defenses that can slow down the aerial game just enough. Sitting on Ben Roethlisberger’s short throws and blitzing him off the edge, the Bills hounded him into his worst game of the season.

“If I don’t play good enough football, then I need to hang it up,” said Roethlisberger, who went 21 of 37 for 187 yards, with two touchdowns and two interceptions. “I still feel like I can do enough things to help this team win football games, and I’ll do everything I can to get us back on track.”

A Pittsburgh defense, meantime, that embellished its bona fides the previous six games against the likes of Garrett Gilbert and Jake Luton and Robert Griffin III was on Sunday exposed by an unfamiliar phenomenon: a formidable passing attack. Missing three starters, including cornerback Joe Haden, the Steelers managed to contain Allen and his cadre of explosive receivers for one half but not two.

In that first half, Stefon Diggs caught three passes, and after the Bills took a 9-7 lead just before the break on a 51-yard interception return by Taron Johnson — their first defensive touchdown of the season — they spent halftime sorting out how to unlock an offense that had gained only 102 yards.

They did that in two ways, Allen said.

One: “I started completing it to the right guys.”

Two: “We started throwing it to Stef.”

Allen completed his first 11 passes after halftime, a stretch of brilliance that included touchdowns to Diggs and the rookie Gabriel Davis, neither of whom were on the Bills last season.

As the Bills sought to mold Allen’s bountiful physical talent into a trustworthy N.F.L. quarterback, they surrounded him with what could be the deepest and most reliable receiving corps in the league. Heading that group is Diggs, who in his first season with Buffalo after being acquired in a trade from Minnesota has caught 100 passes — tying the franchise’s single-season record. Six of those catches on Sunday (for 83 of his 130 receiving yards) came on the two third-quarter scoring drives that capped a string of 23 consecutive points.

“Diggs is so special that as I see him play, I just want to rip off my captain’s ‘C’ and throw it on his chest,” offensive tackle Dion Dawkins said.

Before Sunday, the last time Diggs scored was in Week 10 at Arizona, a late go-ahead touchdown that would only be eclipsed by Kyler Murray’s game-winning Hail Mary. The Bills had won three in a row before that loss, and they have won three in a row since, overcoming the stage fright that doomed them in earlier defeats against two other A.F.C. contenders, Tennessee and Kansas City.

The Steelers may not live in their fears, as their coach, Mike Tomlin, likes to say, but they have now laid bare their shortcomings three times in 12 days. After playing what he called “junior varsity” football in a close win over Baltimore, and producing “catastrophic” results on short-yardage failures in a loss to Washington, the Steelers’ performance Sunday was not an aberration or an anomaly but evidence of a trend.

Asked if there was enough time before next week’s game against Cincinnati to fix an offense that regained center Maurkice Pouncey and running back James Conner but still averaged 2.8 yards on 17 carries, Tomlin replied with one word: Yes. If he is wrong, Pittsburgh might be wise to start monitoring the Browns, who, if they beat Baltimore on Monday night, would inch within a game of the Steelers in the A.F.C. North. The teams will meet in Week 17 in Cleveland.

That division might be unsettled, but the A.F.C. East is not. Long the domain of the New England Patriots, it soon shall belong to the Buffalo Bills, who, week after week in this bizarre season, are making their fans wish they were there to see this ascent for themselves.