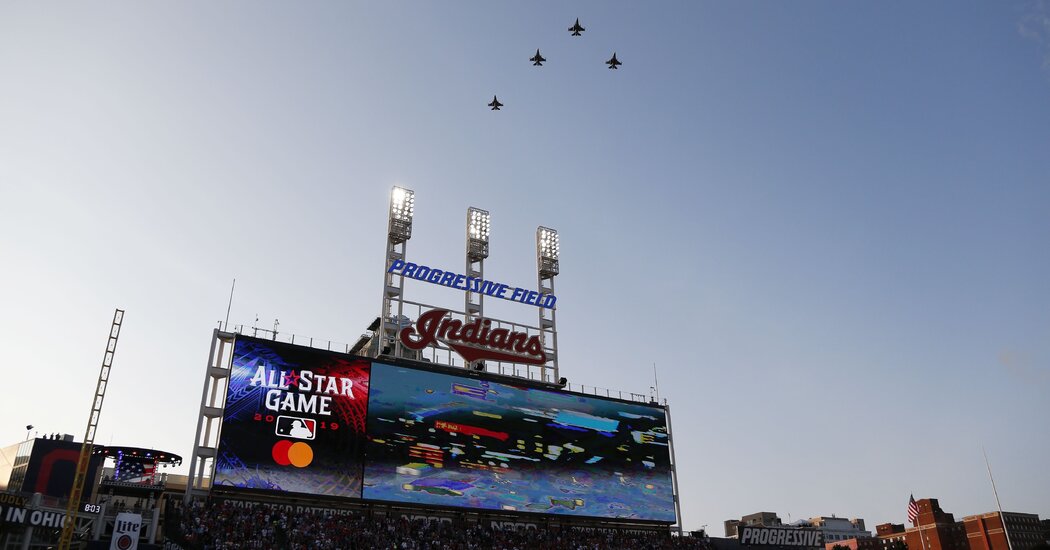 Over the summer, while the country was still roiled by protests over the death of George Floyd at the hands of the police, the Cleveland Indians began to investigate a name change. The team had been known as the Indians since 1915, but after years of protest and criticism over a name that was deemed by many to be racist, it said the time was right to determine whether the name was still appropriate.

It was not lip service. Over several months, the organization, led by the team’s controlling owner, Paul Dolan, conducted research and held interviews with what it called stakeholders — fans of the team, Native American groups, religious and civic leaders from a variety of backgrounds, researchers, historians and psychologists.

And on Monday, the team announced it would abandon the name “Indians,” which many feel is an outdated relic of subjugation. The team will choose a new name in an unspecified time frame. Until it does, it will still be called the Indians. But that is temporary.

“We have decided to move forward with changing the current team name and determining a new, non-Native American based name for the franchise,” the club said in a statement on Monday.

One of the experts the team consulted over the summer was Stephanie Fryberg, a professor of psychology at the University of Michigan and a member of the Tulalip tribes in Eastern Washington State. Her research illustrates the damaging effects the use of Native American sports mascots have on Indigenous people, particularly children.

She spent about 90 minutes on a video conference call with Dolan and several other top executives of the team. She presented her research, gave her opinions and answered their questions. She believes the team should be lauded for its open-minded and genuine approach to a sensitive matter.

“It wasn’t at all like the Washington Football Team, which did it kicking and crying,” Fryberg said. “It was a really thoughtful process, and it was obvious they cared about it. They listened and asked good questions. They said: ‘Look, many of our fans really like this name. Is there any way to make it work?’ But they understood there is no way to keep the name without doing harm.”

“This is a really good day,” said Suzan Shown Harjo, a Native American activist, who first took legal action against the Washington team’s name in 1992. She said the decision by Cleveland to drop its name was far more significant than dropping its logo.

“This is more important because it is an admission that the whole context promotes and allows for the racism that flows from it and targets Native peoples,” she said.

Harjo praised Cleveland for engaging with Native Americans in a respectful, appropriate and fruitful manner, and added that the Atlanta Braves, the Kansas City Chiefs and the Chicago Blackhawks needed to follow suit.

“I think this decision by Cleveland is going to tip the balance for the remainder,” she said, referring also to school mascots and professional sports team names. “We’ve already eliminated the majority of the names. We’ve already won at the societal level.”

Cleveland’s executives also consulted the National Congress of American Indians, a rights organization that can provide teams and schools with the tools and information they need to change their names. It also helps them with messaging to their fans and supporters, many of whom oppose changing a name.

The organization commended the baseball team for its approach through the process, which it called a model for future organizations to emulate.

“The genuine commitment the team has made to listen to and learn from Indian Country over the past several months is to be applauded,” Fawn Sharp, the president of the N.C.A.I., said in a statement on Monday, “and the process the team used should serve as a blueprint for sports teams and schools across the nation as this movement for racial justice and inclusion continues to grow.”

Not everyone applauded the decision. When the news was reported on Sunday night, President Trump tweeted: “Oh no! What is going on? This is not good news, even for ‘Indians’. Cancel culture at work!”

Terry Francona, Cleveland’s field manager, had been scheduled to speak with reporters on Monday afternoon, but the team postponed the session because it conflicted with team meetings. But others in baseball were happy, including Torey Lovullo, the manager of the Arizona Diamondbacks, who played for Cleveland in 1998.

“Obviously, the Cleveland Indians organization felt strongly enough that something needed to change, and they should be proud of themselves for doing that.”

As for a new name, the team made no commitment and said it would continue to study the options, many of which have already been floated. Fans can even wager on what the new name might be. Spiders, a name that was used by a different Cleveland team in the 19th century, was labeled the 5-to-2 favorite by BetOnline, a sports gambling website. The Cleveland Baseball Team, modeled on the Washington Football Team’s current moniker, was 5-1, and the Naps, the team name from 1903 to 1914, which commemorated the former Cleveland player and manager Napoleon Lajoie, was 10-1.

“The team’s decision to change the current name is Phase 1 of a multiphase process,” the team’s statement said. “Future decisions, including new name identification and brand development, are complex and will take time.”

As long as the team’s name has no connection to Native American imagery, Harjo said she would be happy to root for it.

“Sure,” she said with a laugh, “especially if they are playing the Atlanta Braves or the Kansas City Chiefs.”