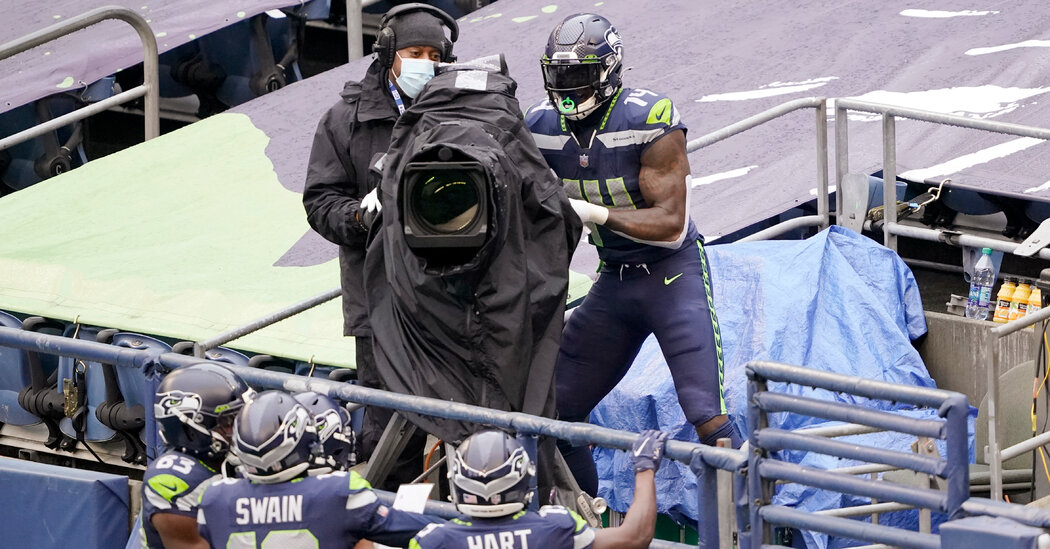 SEATTLE (AP) — Russell Wilson threw four touchdowns passes to give him a new career-high with 36 for the season before resting in the fourth quarter, leading the Seattle Seahawks to a 40-3 rout of the Jets on Sunday.

Seattle (9-4) rebounded exactly as it had hoped after its surprisingly poor offensive performance last week in a loss to the Giants. They stayed even with the Los Angeles Rams (9-4), who beat the Patriots (6-7) on Thursday, on top of the N.F.C. West.

Wilson threw touchdowns to Freddie Swain and DK Metcalf in the first half and added touchdown tosses to Will Dissly and David Moore in the third quarter. It was his fifth game this season with at least four touchdown passes. His previous career high in touchdown passes came in 2018.

Metcalf commandeered a TV broadcast camera as part of his celebration after catching a 5-yard scoring pass in the second quarter, his 10th of the season.

Wilson finished 21 of 27 for 206 yards and checked out late in the third quarter, giving way to the former Jets quarterback Geno Smith for his first action since joining Seattle last season. Wilson’s only mistake was a forced throw in the first half that the Jets’ Marcus Maye caught for a terrific juggling interception.

Wilson had played every snap of the previous 49 games for Seattle. The last time he wasn’t under center was Week 15 of 2017 when Seattle lost 42-7 to the Rams. It was also a rare blowout for Seattle. The Seahawks had just one win by more than 14 points in the past two seasons. For the Jets, it was another miserable day in their forgettable season. Days after firing defensive coordinator Gregg Williams after a collapse at the end of last week’s loss to Las Vegas, the Jets (0-13) showed little resistance on defense and little excitement on offense as they lost their 13th consecutive game, a franchise record.

And even when the Jets had chances to score, kicker Sergio Castillo struggled. After converting a 45-yard attempt on the Jets’ opening drive, Castillo missed attempts of 37, 41 and 43 yards in the first half. Quarterback Sam Darnold was 14 of 26 for 132 yards.

In just about the only bright spot for the Jets, they extended their streak of scoring on their opening drive to seven straight games, the longest active streak in the N.F.L. and the longest in franchise history.

The Jets became the ninth team since the A.F.L.-N.F.L. merger to start a season with 13 straight losses. Three of those teams had winless seasons.

Seattle’s Jamal Adams, the former Jets safety, set a record for most sacks by a defensive back in a single season, breaking the previous mark of eight by Adrian Wilson in 2005. He had been credited with a sack after forcing Darnold to run out of bounds for a loss in the second quarter, giving him 8 1/2 for the season.

The Jets will be back on the West Coast next Sunday to face the Rams.

Seahawks will make the last of its East Coast trips next week, traveling to play Washington (6-7) on Sunday.