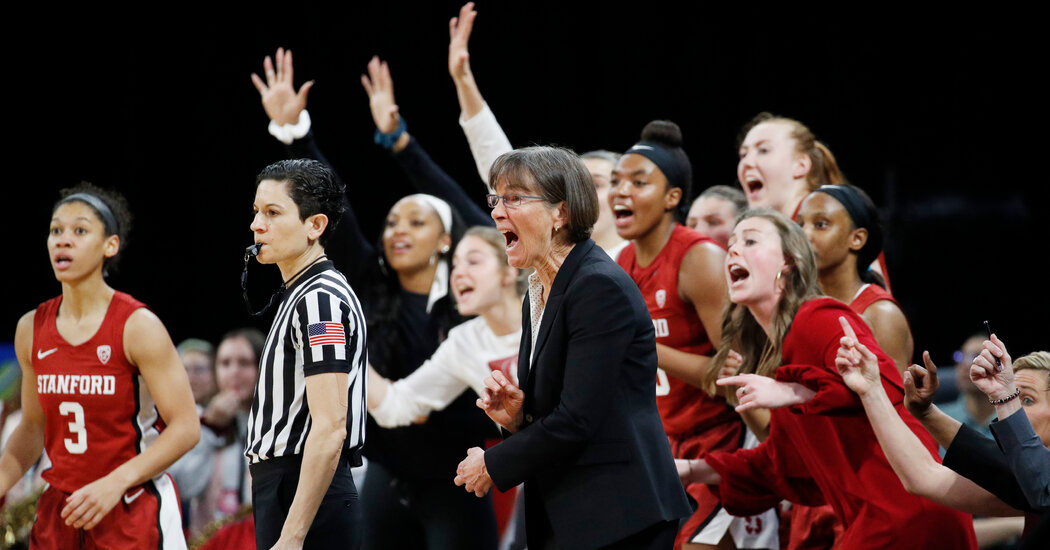 Tara VanDerveer tied Pat Summitt for the most career coaching wins in Division I women’s college basketball on Sunday night when top-ranked Stanford trounced its rival California, 83-38, in Berkeley.

The victory was the 1,098th of her career, which began at Idaho, led her to Ohio State for five seasons and then to Stanford, where in the space of four seasons she took a Pacific-10 Conference doormat to the 1990 national championship. It is one of two women’s basketball national championships Stanford has won.

VanDerveer, 67, can move past Summitt, the longtime Tennessee coach who died in 2016, on Tuesday night when the Cardinal plays at Pacific. How long VanDerveer holds on to the record is uncertain. She entered Sunday night’s game with five more wins than Connecticut’s Geno Auriemma.

VanDerveer might have passed Summitt earlier — and been further ahead of Auriemma — had she not spent a year away from Stanford to coach the 1996 United States women’s Olympic team to a gold medal. She may have also reached the milestone last season had the N.C.A.A. tournament not been canceled because of the coronavirus pandemic. The Cardinal finished last season ranked seventh with a 27-6 record, leaving her four wins behind Summitt.

For years, Stanford was a foil for the national championship ambitions of Connecticut and Tennessee, but the Cardinal in recent years have slipped slightly in stature — in part through the ascendance of Oregon and Oregon State, which have each reached a Final Four in the past five seasons. Stanford, which had won 14 consecutive Pac-12 regular-season titles from 2001-14, has not won one since.

But a resurgence coincided last season with the arrival of Haley Jones, the first time in nearly a decade that the nation’s top recruit went to Stanford. The Cardinal began this season ranked second before climbing to the top spot with three lopsided victories. The Cardinal scored the game’s first 14 points against Cal, though there was at least one dramatic moment — sophomore forward Francesca Belibi threw down a one-handed breakaway dunk just before halftime.

When Sunday’s game was over, the Stanford players did a little dance around their coach.

A celebration of VanDerveer’s record has been muted by the pandemic. The Stanford women’s basketball team, like its football and men’s basketball teams, has left campus and is unable to return without quarantining for two weeks because of directives from the Santa Clara County, Calif., health department, which banned sporting events and practices on Nov. 28.

The Cardinal spent 10 days in Las Vegas, where they played two games, before leaving for Berkeley, in Alameda County, Calif., north of their usual home base, on Saturday. Their next scheduled home game is Jan. 8 against Oregon.