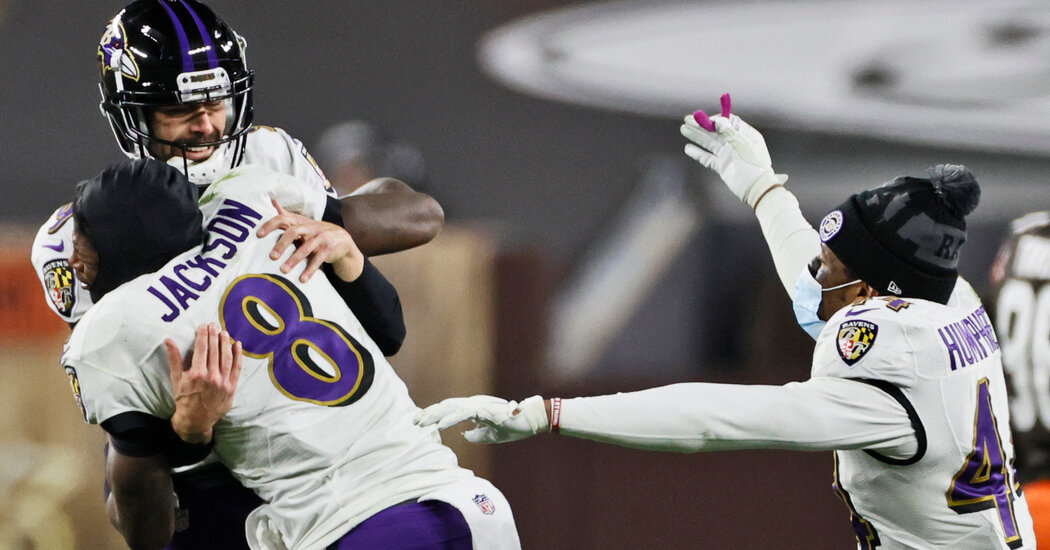 Back on the field after being sidelined by cramps, Jackson threw a 44-yard touchdown pass to Marquise Brown and then set up Justin Tucker’s 55-yard field goal with two seconds left, helping the Ravens to a wild 47-42 win over the Cleveland Browns that helped them stay in the playoff picture.

Tucker, who made 70 straight field goals inside 40 yards before he missed last week, had plenty of distance on his kick to give the Ravens (8-5) a much-needed win.

It was a gut punch for the Browns (9-4), who had rallied from a 14-point deficit to take the lead while Jackson was out.

The Browns had one last chance after Tucker’s kick, but a series of laterals on the final play ended with a safety that affected gamblers all over the country. The Ravens were favored by three on the opening line.

Jackson rushed for two touchdowns while rescuing his teammates, who have overcome a Covid-19 outbreak and numerous scheduled changes so far in 2020.

With the Ravens down, 42-35, Jackson returned from the locker after backup quarterback Trace McSorley suffered a leg injury when he slipped on a slick FirstEnergy Stadium field that was tough for players to cut on all night.

On fourth-and-5, Jackson calmly rolled to his right and found a wide-open Brown in the middle of the field and he easily outran Cleveland’s defenders for the touchdown score.

But Cleveland quarterback Baker Mayfield wasn’t going to be denied. He drove the Browns 75 yards, hitting running back Kareem Hunt for a 22-yard touchdown pass with 1:04 left.

Jackson then showed why he’s a superstar.

The reigning N.F.L. most valuable player completed two straight passes to tight end Mark Andrews for 28 yards and moved the Ravens in range for Tucker, one of the most accurate kickers in league history.

Mayfield had shaken off a costly interception and brought the Browns back, scrambling from the pocket and scoring on a run with 6:33 left.

Jackson was playing in his second game since returning from the Covid-19 list. Before he left late in the third quarter with the Ravens leading, 34-20, he had rushed for 124 yards and two touchdowns.

The Browns will next make the first of two straight weekend visits to the New York area to play the Giants on Dec. 20 and the winless Jets on Dec. 27.