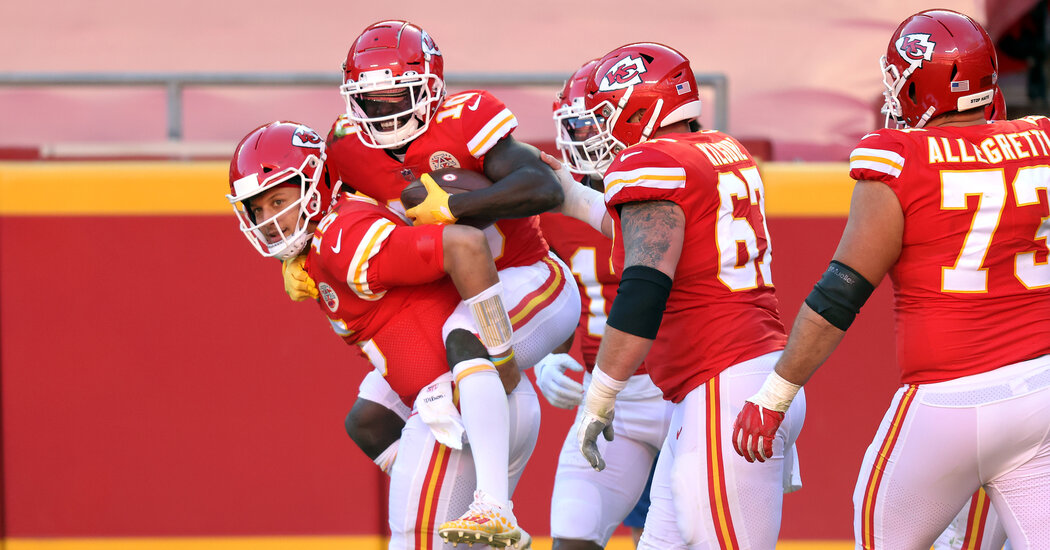 The only real danger to the Kansas City Chiefs in the playoffs will be the Chiefs themselves.

The defending N.F.L. champions have grown bored of terrestrial football lately. The Chiefs (who have already clinched the A.F.C. West) now strive to turn their games into inscrutable performance art installations, allowing inferior opponents to stay close while they execute play concepts that appear to have been found scribbled in the margins of Hunter S. Thompson manuscripts.

Patrick Mahomes and Tyreek Hill usually connect for a few 40-yard touchdowns to compensate for their penalties, turnovers and self-indulgent noodling, but the Chiefs’ weekly attempts to commune with the cosmos could eventually result in a playoff upset that allows one of the following pretty good — but far from flawless — challengers to represent the A.F.C. in the Super Bowl.

The Steelers rose to 11-0 by pummeling opponents’ backup quarterbacks while hoping that no one noticed that their offense is built entirely out of screen passes. The Washington Football Team and Buffalo Bills figured out in recent victories over the Steelers that Ben Roethlisberger now throws the football like he’s trying to float a Ping-Pong ball into a red plastic cup. The Steelers’ defense remains dominant, when not dealing with health issues, and the team can find reassurance in the fact that Jimmy Garoppolo and the San Francisco 49ers nearly beat the Chiefs in the Super Bowl last season with the same set of strengths and weaknesses.

Decades in the shadow of the New England Patriots left the Bills with a deep-seated inferiority complex, and they lost important midseason games to the Chiefs and Tennessee Titans after a 4-0 start by playing as if they simply felt unworthy of being counted among the A.F.C. front-runners.

The Bills appear to have outgrown their self-doubt in recent victories over the Seattle Seahawks and Steelers, but behavioral conditioning can be hard to break. If quarterback Josh Allen transforms back into an interception-happy Winter Soldier when the Bills visit the Patriots in Week 16, it may mean that the Bills have been irrevocably compromised.

Running back Derrick Henry is an indomitable December force, like a Nor’easter, Mariah Carey’s “All I Want for Christmas is You,” or a holiday shopper stiff-arming store greeters and grandparents en route to an (empty) PlayStation 5 display. Henry rushed for 215 yards and two touchdowns in the Titans’ victory over the Jacksonville Jaguars last week, and he appears determined to stuff the Titans’ traditional smash mouth values down everyone’s throats for the holidays just like he did last year.

The Titans’ defense is not nearly as rugged and playoff-ready as their old-fashioned reputation might suggest, but bludgeoning skeptics into quiet acquiescence is also a December tradition, as is post-holiday disappointment.

The Browns are enjoying their first winning season since 2007. Allowing them to enjoy anything more would simply be too much pleasure for anyone to experience in 2020.

The Colts are kit-bashed together from leftover pieces of the 2010s San Diego/Los Angeles Chargers (Philip Rivers), 2017 Minnesota Vikings (cornerback Xavier Rhodes) and last year’s 49ers (defensive tackle DeForest Buckner), all hot-glued onto the frame of the Andrew Luck-era team. As a result, they look pretty good until you examine closely and realize that they were cobbled together almost purposely so they could lose a playoff game.

The Dolphins are better at making opponents look foolish than at making themselves look like legitimate contenders. They combined takeaways (they’re tied with the Steelers for the N.F.L. lead with 25) with excellent special teams and an ultraconservative offense to upset the Los Angeles Rams, throw a scare into the Chiefs last week and win lots of low-scoring games against the Jets and other bottom-feeders.

Like the Bills, the Dolphins may be programmed by decades of hopelessness to self-destruct if they come too close to success. Head coach Brian Flores already benched rookie quarterback Tua Tagovailoa in one loss in what looked like a panicky move, and Flores might be tempted to turn again to Ryan Fitzpatrick when he needs a comeback, not realizing that the real “FitzMagic” is the outsized reputation the journeyman backup has nurtured by almost winning meaningful games.

With their midseason swoon behind them but with obvious lingering shortcomings on both sides of the ball, the Ravens are barreling toward yet another off-season of “why can’t Lamar Jackson win playoff games?” conversations. Come late January, that may be the only thing fathers-in-law on Facebook have to talk about.

The Raiders remain mathematically alive but have lost three of their last four games, and they fired defensive coordinator Paul Guenther on Sunday after surrendering 44 points in a loss to the Colts and (more troublingly) 28 points in a near-loss to the Jets.

The Raiders upset the Chiefs in Week 5 and lost by just four points in the Week 11 rematch, so they cannot be discounted as a threat if they reach the playoffs. But again: The trick to winning the A.F.C. is to be on the field when the Chiefs decide to beat themselves. The Raiders are the least likely of the A.F.C. playoff hopefuls to position themselves to make that happen.