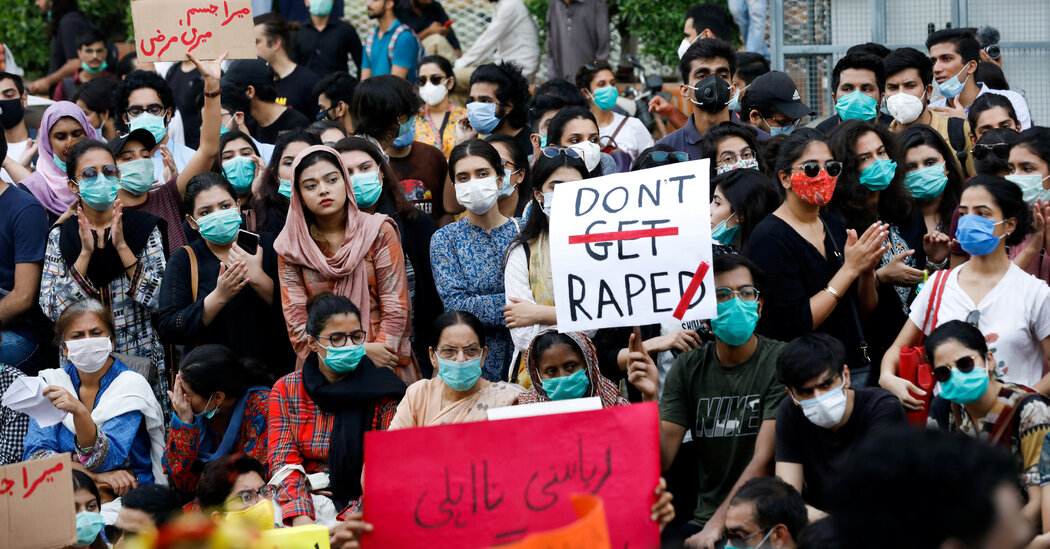 KARACHI, Pakistan — When a top police official in the eastern city of Lahore said that a woman who was raped on a deserted highway was partly to blame for the attack, thousands of protesters swarmed city streets. Now, in response to months of protest, the government has passed a measure that says men convicted of rape can be sentenced to chemical castration.

The ordinance, announced by the office of President Arif Alvi, also orders the creation of crisis centers to process rape kits within six hours of an attack, and special courts that will be required to try cases within four months.

Prime Minister Imran Khan had promised to speed up justice for rape survivors in response to a series of assaults that have spurred demands that the government impose the death penalty in rape cases.

Mr. Khan and his cabinet approved the legislation last month, and Mr. Alvi signed it into law on Tuesday. It must be approved by Parliament within four months to remain in effect.

The woman attacked on a highway outside Lahore had run out of gas while on a journey with her children in September. She called the police for help, but before they arrived, two men appeared, pulling her and her children out of the car and raping the woman in a nearby field.

Afterward, the chief police official in Lahore said that the woman, who lived in France, was partly to blame because she had driven at night on a quiet road. The official’s remarks drew condemnation from Pakistan’s human rights minister and sent thousands of protesters onto the streets.

More than a month after the attack, two men were taken into custody. Both have pleaded guilty.

Then, in November, came a case in which the police said a woman and her 4-year-old daughter had been raped for two days by a man who had lured the woman across the country with promises of a job. The main suspect was later killed, in what the police said was a shootout between officers and a suspected accomplice.

With pressure increasing on his government to take action, Mr. Khan publicly suggested that convicted rapists could face castration or public execution.

The draft ordinance defines chemical castration as “a process whereby a person is rendered incapable of performing sexual intercourse for any period of his life, as may be determined by the court, through the administration of drugs which shall be conducted through a notified medical board.”

There are no government statistics on rape in Pakistan, but rights organizations say it is a severely underreported crime.

Rape victims are routinely bullied by the authorities to drop their complaints, and cases are rarely solved, according to a U.S. State Department report published last year on human rights in Pakistan.

Fawad Chaudhry, a minister in Mr. Khan’s cabinet, said in Parliament in September that 5,000 rapes were reported each year in the country, which has a population of more than 200 million.

That’s a fraction of the number reported even in many far smaller countries. “If we were to count the unreported rapes, there would be thousands more,” Mr. Chaudhry said.

Speaking out about rape remains taboo in Pakistan, a conservative country, but activists, especially on social media, have drawn greater attention to crimes against women in recent years.

While women’s rights activists applauded the government’s move, they said the problem was less an absence of good law than of enforcement, and that it was unclear how the measures would be implemented.

“It’s a good step by the government, though we think it needs much more detail,” said Anis Haroon, the former chair of a national commission on women.

Ms. Haroon said that the law’s requirement for forensic evidence within six hours of an attack might be impossible in a country with few medical centers equipped for such an examination, particularly in rural areas.

Amnesty International derided the penalty of chemical castration as “cruel and inhuman.”

“Punishments like this will do nothing to fix a flawed criminal justice system,” Rimmel Mohydin, a South Asia campaigner at Amnesty, said in a statement. “Instead of trying to deflect attention, the authorities should focus on the crucial work of reforms that will address the root causes of sexual violence and give survivors the justice they deserve and the protection they need.”

Pakistan’s legal system treated rape as solely a matter for Islamic Courts until 2006, when a measure called the Women’s Protection Act brought it under the jurisdiction of criminal law.

A decade later, Parliament passed a further law that provided for collection of DNA evidence, promised victims privacy and legal representation, and increased penalties for the rape of people with mental or physical disabilities.

But victims were still required to make an in-person complaint with a sessions court judge before the police could arrest any suspect, a restriction that may change under the fast-track courts introduced by Tuesday’s measure.

Mukhtar Mai, a rape survivor and prominent women’s rights activist, said she believed the new ordinance would have aided her yearslong pursuit of justice, which culminated in 2019 when Pakistan’s Supreme Court upheld a ruling that acquitted four of the five men she accused of attacking her.

Ms. Mai was gang-raped in June 2002 on the orders of a village council as punishment for her younger brother’s supposed relationship with a woman from a rival tribe.

“I went through a tough time because there was no law against rape in the country then,” Ms. Mai said. “If a lady can get justice expeditiously through this, I will feel that I am getting justice even though I have exhausted all the remedies in my case.”