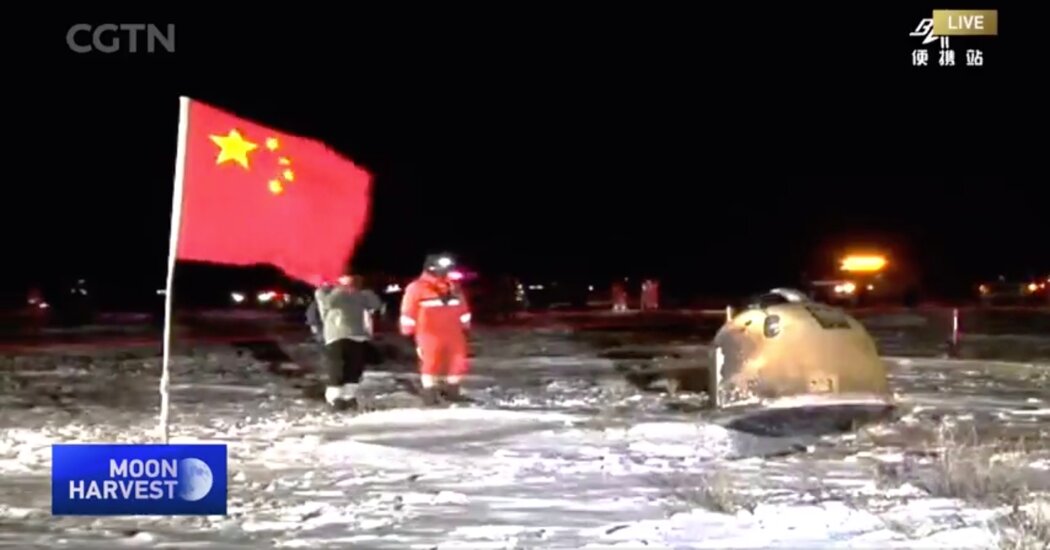 China may have been a latecomer to the moon, but when its capsule full of lunar rocks and soil returned to Earth early Thursday, it set the stage for a new space race over the coming decades. This time, it will be a competition over resources on the moon that could propel deeper space exploration.

The country’s Chang’e-5 spacecraft gathered as much as 4.4 pounds of lunar samples from a volcanic plain known as Mons Rümker in a three-week operation that underlined China’s growing prowess and ambition in space. It was China’s most successful mission to date.

The United States and the Soviet Union competed for supremacy in an epic space race in the 1960s and ’70s, during which they brought back lunar samples, but that was a different era. Now China is in the fray, and today’s competition — once seemingly the realm of science fiction — could be equally intense and more mercantile.

The Chinese are eager to flaunt their technical skills and explore the solar system. Like the United States, the country has a broader goal to establish a lunar base that could exploit its potential resources and serve as a launching pad for more ambitious missions.

Beijing has not “staked out some sort of declarative statement where they want to replace the United States as leader in space,” said Brendan Curry, chief of Washington, D.C., operations at the Planetary Society. “But they certainly want to be a major actor in space.”

In a statement, the China National Space Administration said a capsule with the moon rocks landed in Inner Mongolia at about 2 a.m. local time (it was around 1 p.m. Eastern time on Wednesday). The capsule had separated from the main spacecraft when it was about 3,000 miles above the southern Atlantic Ocean. At an altitude of about six miles, it deployed its parachutes to slow its descent.

Video broadcast on state television showed recovery teams arriving at the capsule less than an hour after the landing. It may take hours for the capsule to be transferred to facilities where it can be confirmed that the lunar samples are intact.

Space now is fast becoming one more arena where the two countries might clash. Although China’s military and civilian space program are still catching up with those in the United States, the country’s ambitions were part of the Trump administration’s motivation to set up a Space Force.

Vice President Mike Pence last year announced plans to accelerate America’s return to the moon by 2024 during a speech in which he warned that China wanted to “seize the lunar strategic high ground and become the world’s pre-eminent spacefaring nation.”

Entrepreneurial space companies could further upend any competition between NASA and China. By the time that NASA or Chinese astronauts reach the moon, Elon Musk, the billionaire founder of SpaceX, says he will be sending people to Mars. Even if Mr. Musk’s pronouncements turn out to be too optimistic, the future of space exploration may no longer be dominated by national space agencies.

Some hope that a competition between China and the United States could change to cooperation. But NASA is currently limited from directly working with the Chinese space agency or Chinese-owned companies. That provision was inserted in 2011 into the law financing NASA by Frank Wolf, then a Republican congressman from Virginia, to punish China for its human rights record and to protect American aerospace technology.

In the near term, planetary scientists in the United States could be left out of the science bonanza from the rocks gathered by Chang’e-5, which came from a region of the moon much younger than those visited previously.

Although the law does not prevent non-NASA scientists from working with Chinese counterparts, it does prevent Chinese scientists from looking at the moon rocks that NASA astronauts brought back during the Apollo missions, and China may well return that snub.

“Obviously the United States prohibits cooperation with China, no?” said Xiao Long, a scientist at the China University of Geosciences in Wuhan, who has advised the Chinese space program. “It certainly does not hope that China develops quickly. They have already put their cards on the table. It is not something that is being done quietly.”

At a talk on Tuesday to the Greater Houston Partnership, an economic development organization, Jim Bridenstine, the NASA administrator, addressed the prospect of relaxing the ban on NASA-China cooperation.

“It’s above my pay grade,” Mr. Bridenstine said. “But certainly, I do believe NASA is a tool of diplomacy. I believe that asset is a tool that can be used as, for example, a pot sweetener for a trade deal. I think it can be used for all kinds of purposes for international diplomacy.”

The incoming Biden administration has yet to announce its plans for NASA. But it will probably push back the Trump administration’s 2024 target, which was unlikely to be achieved even if President Trump had been re-elected because of technical and financial limitations.

In contrast to the uncertainty and periodic shifts in direction at NASA, China has stuck to its plans and timetables, with the country’s space program serving as a source of national pride that provides another tool of international diplomacy.

China’s leader, Xi Jinping, has made space a central part of his dream of creating a greater, more powerful China and, despite occasional setbacks, the space program has made enormous progress.

“They are able to commit to a much longer-term goal,” said Namrata Goswami, an independent analyst and co-author of a new book on space exploration, “Scramble for the Skies.”

The development of the Chang’e probes started in the early 2000s when President George W. Bush declared that NASA astronauts would return to the moon by 2020. It continued that path when the Obama administration canceled that moon program and focused on more distant destinations like an asteroid and Mars.

The first two Chang’e spacecraft were orbiters that circled the moon. Chang’e-3 landed in December 2013, and China joined the United States and Soviet Union as the only nations to make a successful landing there. In January 2019, Chang’e-4 became the first spacecraft to land on the far side of the moon. Its rover, called Yutu-2, is still operating, studying lunar geology nearly two years later. China is now the only country to land successfully on the moon in the 21st century, and has done it three times.

And even as the Trump administration touted a return to the moon, China has shown no urgency to accelerate its plans of sending Chinese astronauts to the moon in the 2030s. If NASA astronauts arrive earlier, China seems to be in no rush to beat them.

But while China takes its time with longer-term space goals, the successful Chang’e-5 mission took off only last month, and its speedy return with lunar samples provided almost instant gratification. It required feats of engineering and execution that China has never attempted before.

Not long after arriving in lunar orbit, Chang’e-5 split into two parts, an orbiter and a lander that reached the surface on Dec. 1. It then scooped up and drilled for samples that the spacecraft returned to lunar orbit and then ultimately back to Earth. The lander also lifted a small Chinese flag.

China envisions its moon missions as more than demonstrations of its space technology and national pride. It envisions the moon as a base — robotic at first, then perhaps a human outpost — that will support space exploration in the decades to come.

Lt. Gen. Zhang Yulin, a former deputy commander of China’s astronaut program, wrote in The People’s Daily last year that cislunar space — the area between the Earth and moon — would “become another broad field for the expansion of human living space.”

Another senior official in China’s space program, Bao Weimin of the state-owned China Aerospace Science and Technology Corporation, last year floated the once seemingly fanciful idea that cislunar space could become an economic zone generating $10 trillion for the country’s economy.

“It’s not just about showing off technology,” Dr. Goswami said in a telephone interview. “They are starting to articulate economic aspirations in terms of the resources that are out there.”

China was not the only country to bring something back from space in December. A Japanese spacecraft, Hayabusa2, returned to Earth after a six-year journey with what that country’s space agency described as “a large number of particles,” which scientists will study to understand the building blocks of the solar system’s inner planets, including Earth.

Still, in scope, ambition and resources, China’s program now rivals the United States’ and Russia’s. And in the nearer term, competition between the two countries could occur closer to Earth.

China is planning to build a space station in orbit around Earth and has offered to have astronauts from other nations work there. If it is able to accomplish that goal, that would make the Chinese orbital outpost a competitor with the International Space Station led by the United States and Russia.

And the restrictions on cooperative study of China’s new stash of moon rocks will also be a disappointment for many scientists in the United States in the years to come.

“They represent a completely different era of lunar history and will definitely help in our quest to understand the evolution of our moon,” wrote Clive R. Neal, a professor of civil engineering and geological sciences at the University of Notre Dame who said he would love a chance to examine the new samples.

“Alas,” Dr. Neal added in his email, “I don’t think this is possible.”

That was followed by a sad face emoticon.