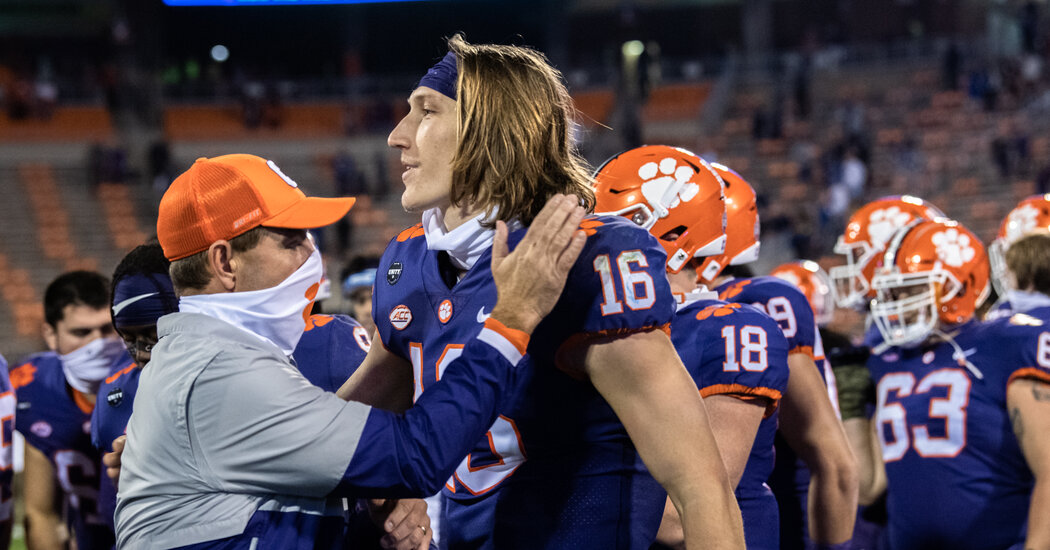 If would be one thing to suggest that Trevor Lawrence, the dynamic Clemson quarterback, be paid $173,000 this season. But what about the long snapper at Bowling Green? And it would raise few eyebrows to say that Luke Garza, the University of Iowa basketball star, should be paid $115,600. But what about the backup point guard at Portland State?

As the N.C.A.A.’s amateurism model — the one that has turned college sports into a billion-dollar industry — has been increasingly under assault in courtrooms and legislative halls, Senator Cory Booker on Thursday produced the most ambitious swing at it yet. He put forth a multipronged bill with a provocative element: It would give every athlete in a handful of revenue-generating sports a share of profits.

The bill stems not only from Booker’s experience as a former football player at Stanford, he said, but from conversations he has had in recent months with college players, which he said have centered on the racial inequities of an unpaid, largely Black work force generating millions for largely white coaches and administrators.

“There’s this stratospheric wealth being created,” said Booker, whose bill is being introduced three days after Auburn decided to fire its football coach, Gus Malzahn, at a cost of more than $21 million. “But the people — quite literally in the fields — who are creating that wealth are seeing little to no share of it.”

Framing the issue as one of social injustice — or, more starkly, as akin to a slave system — is nothing new for athlete activists. But that description is carrying greater currency at a time when institutions across the country are being scrutinized for systemic racism.

The coming year may provide a tipping point for the N.C.A.A., which on Wednesday convinced the Supreme Court to take up a lower-court ruling that said the organization violated antitrust laws by putting restrictions on educational benefits that colleges could provide athletes. Five states have already passed legislation (and more than 20 others have proposed bills) that would allow athletes to cash in on their fame, and at least four other bills related to the issue have been introduced in Congress.

That three bills — by Senator Roger Wicker of Mississippi, Senator Marco Rubio of Florida and Representative Anthony Gonzalez of Ohio, a former Ohio State receiver — have been put forth by Republicans is a sign that this issue may generate bipartisan attention.

Booker’s bill, which is being co-sponsored by Senator Richard Blumenthal of Connecticut, has drawn only Democratic support thus far, with Senator Kirsten Gillibrand of New York and Representative Jan Schakowsky of Illinois signing on. But Booker said that he has found an empathetic ear with Senator Lindsey Graham, the Judiciary Committee chairman, who along with the Commerce Committee headed by Wicker, has held hearings this year on athletes’ ability to make money off the use of their name, image and likeness.

Those hearings have come at the urging of the N.C.A.A., which has been lobbying for legislation that would provide it an antitrust exemption. The goal of the N.C.A.A.’s lobbying is to supersede state legislation, like laws passed in California and Florida, that aims to limit a college’s ability to prohibit athletes from being compensated for their skills while, say, a computer whiz or a music prodigy faces no such restrictions.

The 61-page bill proposed by Booker addresses more than paychecks. It would set health standards that range from concussion protocols to how sexual assault cases should be investigated. It would set up a fund to help cover the costs of injuries that may linger long after an athlete’s career is over, and it would regulate sports agents. It would require colleges to reduce coach and administrator salaries and reign in other costs before dropping sports.

And it would establish a nine-member commission, appointed by the president, with at least five former college athletes, with the power to investigate and fine universities as much as to $250,000 for violating its provisions and ban individuals from working in college athletics.

“This is a belt-and-suspenders approach to enforcement,” said Blumenthal, a former Connecticut attorney general. “There will be no winks and nods here. We are writing a good law and it will have teeth.”

The most ambitious — and likely the most contentious — provision would require colleges to share the profits they make with the athletes who generate them. In sports where revenues exceed the cost of scholarships across an entire division — at the moment that would be athletes who play football, men’s and women’s basketball and baseball — the profits generated in each sport would be shared equally with the scholarship players.

Using data supplied by universities to the Department of Education, Booker said that would mean payments of $173,000 a year to football players, $115,600 to men’s basketball players, $19,050 to women’s basketball players and $8,670 to baseball players who are on full scholarship. Those figures pale in comparison to coaches’ salaries. Fifty head football coaches, for example, earned at least $3 million this year, according to a USA Today database. At Ohio State, four assistant coaches earned at least $1 million.

If the bill is tilted toward the athletes, Booker said, that is because it is the only bill so far to be crafted from the athletes’ perspective, though it notably avoids any mention of whether athletes should be considered employees.

(By contrast, the bill proposed by Wicker hews more strictly to regulating athletes’ ability to profit off their fame, affords the N.C.A.A. the antitrust exemption it covets as an escape from persistent legal challenges, and states plainly that athletes cannot be considered employees.)

Booker’s bill will not be addressed in the Senate’s current session, but he said he would reintroduce it when the new one begins in January.

The starting point on eventual legislation — if it is closer to Booker’s proposal or Wicker’s bill — will be influenced heavily by the remaining two Senate races in Georgia on Jan. 5. If Republicans hold on to at least one of the two seats, Wicker will retain his seat as committee chairman. If not, then Democrats will control the Judiciary Committee on which Booker and Blumenthal both sit, and the Commerce Committee of which Blumenthal is a member.

“If we’re in the majority, it puts us in a much better position to get this done,” Booker said.