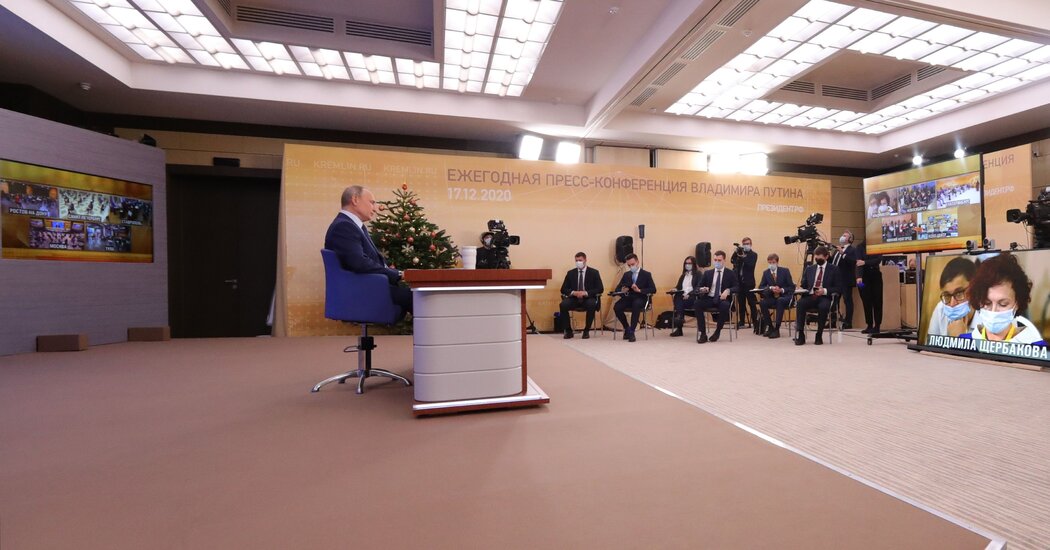 Sergei Shnurov, a rock star turned journalist, asked Mr. Putin why Russian hackers did not help President Trump win the American election and whether Mr. Putin planned to offer Mr. Trump a job in Russia next year. Mr. Putin responded by denying, as he always has, that Russia had ever intervened in American politics, and added some farewell praise for Mr. Trump.

“I don’t think Trump needs any help finding employment,” Mr. Putin said. “He has quite a large base of support inside the United States and as far as I understand he does not plan to depart from the political life of his country.”

American officials acknowledged on Monday that the State Department and parts of the Pentagon were among the government entities compromised by a sophisticated Russian hacking attack, but Mr. Putin did not comment on the matter. Instead, he said Russian-American relations had become “hostage to domestic politics” in the United States, referring to Democrats’ criticism of Mr. Trump as being too soft on Russia.

“We expect that the new president-elect of the United States will understand what is going on,” Mr. Putin went on, referring to Joseph R. Biden Jr. “He is an experienced man, both in domestic politics and in foreign policy, and we expect that all the problems that have arisen — if not all, then at least some — will be solved by the new administration.”

Questions early in the news conference focused on the coronavirus pandemic, which has killed 49,151 people in Russia, according to the official statistics, which are widely viewed as understating the toll. Mr. Putin, echoing a common refrain of Russian officials and the state media, acknowledged that Russia was hit hard but insisted that things were even worse elsewhere. He highlighted Russia’s development of its own coronavirus vaccine and the creation of thousands of dedicated hospital beds.

“There is a sea of problems, but this sea, this ocean is everywhere,” Mr. Putin said. “I can say confidently that we met these problems worthily, perhaps even better than in other countries.”

But the country is now in the midst of its fiercest wave of the coronavirus so far, recording more than 500 deaths a day. Vaccination is proceeding slower than expected, hobbled both by production problems and mistrust. And the medical system is still struggling to cope, a fact that journalists and regular Russians who submitted their own questions online asked the Russian leader to address.