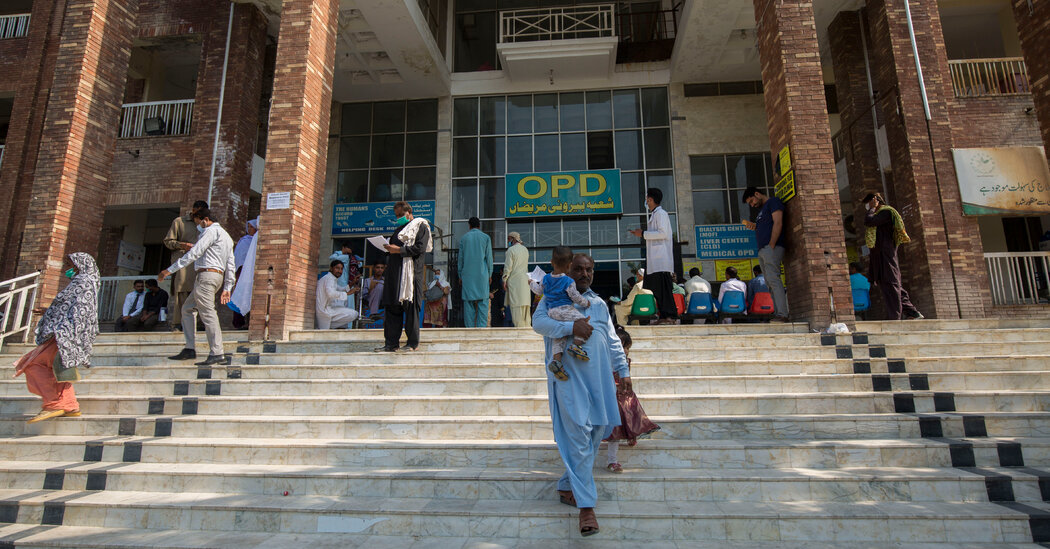 KARACHI, Pakistan — Iqbal Shaheen, a taxi driver, drove his sick father to this city’s three main hospitals. All of their intensive care beds and ventilators were occupied.

Mr. Shaheen was told there might be room at a private hospital, for $625 a day, far above what his earnings of $10 a day could cover. He took his father home to die.

“The poor cannot afford to be sick,” Mr. Shaheen said. “Without political connections, a coronavirus patient cannot get admitted at a public hospital, while paying a private hospital’s bills is unthinkable.”

As winter sets in, cold weather, pollution and public apathy to the coronavirus are weighing heavily on Pakistan’s limited health care system.

Pakistan’s Covid-19 positivity rate has rocketed up to about 7.7 percent of tests administered in recent weeks from only 2 percent in October, prompting a plea from health experts and doctors in Karachi for the government to impose a strict nationwide lockdown.

Prime Minister Imran Khan has closed schools but has ruled out a second lockdown, saying it would decimate the economy.

“We don’t want to lead people to death due to hunger, while saving them from coronavirus,” Mr. Khan told journalists in November.

By official figures, Pakistan is weathering the coronavirus better than the United States, Europe and neighboring India. Total infections have reached 448,522, according to researchers at Johns Hopkins University using official figures, and more than 9,000 people have died.

Still, cases are surging, and limited testing compared with other countries suggests the virus could be racing through the country at an even higher rate. Health experts cite ineffective government limits on personal contact and widespread doubts, often fueled by conspiracy theories, that Covid-19 poses a threat.

Pakistan was also lulled into a false sense of security. A widely predicted rise in infections over the summer failed to show up in official numbers. Government restrictions on travel or the overall youth and resilience of Pakistan’s population may have contributed.

“Pakistanis remained safe during the first wave and didn’t face a serious situation like seen in other countries, mainly because of God’s special blessings,” said Dr. Qaiser Sajjad, a leader of the Pakistan Medical Association.

The second wave is proving more lethal. Some hospitals are turning away patients. In Dr. Ruth Pfau Civil Hospital in Karachi, managers are scrambling for beds.

“The government seems to have failed to enforce health guidelines,” Dr. Sajjad said.

At the Holy Family Hospital in the city of Rawalpindi, virus wards that had been nearly empty are beginning to fill. Now, about a quarter of the 120-bed facility has been taken up, said Dr. Akhtar Mehmood, the hospital’s coronavirus coordinator, though patients are in worse condition than during the first wave. “This is a major difference,” he said, adding that the hospital can take more patients as needed.

Despite the rise, people in Karachi show few signs of concern. Even as the positive testing rate topped 18 percent in the city of 20 million, markets were packed with shoppers without masks. Buses were full. Overflow passengers rode on the roofs.

Over the summer, when official figures showed infections falling, Mr. Khan’s government credited its strategy of limited lockdowns. It had called in the Pakistan military, which plays an outsize role in the democratic country’s politics and is relatively well-organized and disciplined compared with the civil government. It also cited knowledge it had gained through a polio eradication effort.

“One clear consistent hallmark has been a coordinated, professional, data-driven, epidemiological response,” said Dr. Faisal Sultan, an adviser to Mr. Khan and Pakistan’s de facto health minister. “That’s the one thing that differentiates Pakistan from other countries.”

Dr. Sultan faulted the rising caseload on lax compliance with health guidelines on mask wearing and strangers mingling at weddings and protests. Still, he said, data showed that state interventions were working.

Other evidence cast doubt on the effectiveness of the government’s response. Under pressure from religious groups in the deeply conservative country, the government weakened many social distancing efforts almost immediately after enacting them.

When police tried to prevent worshipers from gathering at mosques for prayers during the peak of coronavirus cases in April, they found themselves under attack. In Karachi, some worshipers chased the police through narrow alleyways, pelting them with rocks and sending several officers to the hospital.

The government has proved equally ineffective at imposing restrictions as it battles a second wave.

Thousands of people have attended anti-government rallies in recent weeks. Religious congregations have ignored the official ban on assemblies.

“People are not following safety precautions and therefore the situation at the health facilities is getting more serious day by day,” said Dr. Ismail Memon, a senior official at Dr. Ruth Pfau Civil Hospital.

As the rate of infection grows, anxiety is also rising among the ranks of small merchants, who were badly injured by Pakistan’s monthslong lockdown.

Haji Dilbar, who sells secondhand shoes out of a cart in a lower-income Karachi neighborhood, said anyone who wears a mask is treated like a pariah.

He believes, as surveys show many Pakistanis do, that the government has exaggerated the Covid-19 threat to “earn dollars” from western countries in the form of foreign aid.

A survey conducted in October by Gallup Pakistan showed that 55 percent of respondents in Pakistan doubted that the virus was real and 46 percent believed it was a conspiracy. Those attitudes make it tougher to enforce mask-wearing and other preventive measures and could complicate the distribution of vaccines when they become widely available.

“You do have the challenge of some vaccine resistance,” said Dr. Sultan, Mr. Khan’s adviser, “and I expect that there will be some anti-vaxxers.”

Places like the village of Manga in Khyber Pakhtunkhwa province, on the border with Afghanistan, will present particular challenges. Fear broke out in March in Manga after one person died and more than 50 people tested positive. As the virus ebbed, some wondered whether the government exaggerated the danger.

Some people are conjuring up conspiracy theories similar to those that have haunted a national campaign to eradicate polio, which includes allegations that politicians are pocketing aid money.

“First the government made money in the name of polio,” said Syed Nawab, a Manga resident, “and now they are selling coronavirus to earn dollars from western countries.”

Politicians and clerics have sown doubts.

A recent video of Faisal Raza Abidi, a former senator, claiming that Covid-19 is “a massacre ultimately aimed at Iran and Pakistan as they don’t accept Greater Israel” has circulated widely.

In April, Tariq Jamil, a popular Islamic preacher, used a televised sermon that was attended by Mr. Khan to assert that the virus was God’s wrath over women dancing and dressing immodestly. In another video spread on social media, Kaukab Okarvi, a cleric, accused doctors of killing patients.

Rather than take on powerful political and religious figures, the government has aimed new health restrictions at small businesses. It is levying fines for staying open late or failing to make customers wear masks, leaving some merchants grumbling.

“Instead of stopping them from holding rallies, government personnel harass small traders, restaurant and marriage hall owners, and mint money in the name of Covid-19 health regulations,” said Hakeem Shah, a merchant who organized a protest against restrictions earlier this month.

The government has also closed schools. About one quarter of the country’s 220 million people are school-age children. Private schools for Pakistan’s tiny elite have resumed online classes, but most schoolchildren lack computers, internet connections or even electricity.

“Low-cost private schools and thousands of public schools and colleges are in no position to provide the facility of online education,” said Ikramullah, an education activist in Karachi who uses one name.

Some parents are sending their children to madrasas, or Islamic schools, that have refused to close their doors.

“We follow the directions of our top religious scholars,” said Mufti Shabbir Farooqi, a teacher at a Karachi madrasa whose enrollment has swelled to 1,400 students from 900, “not the government ministers or law enforcement officers for whether to open or close the madrasas.”