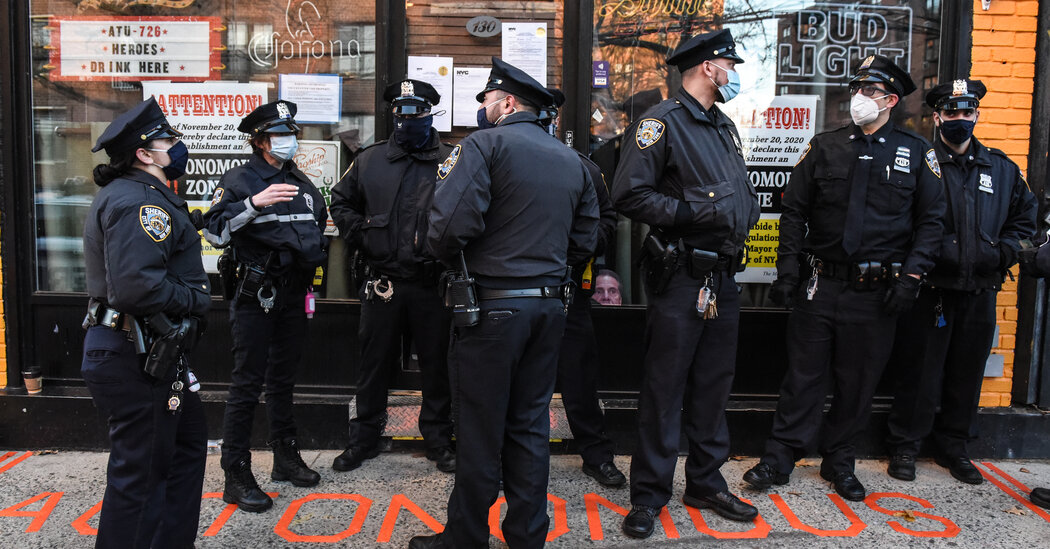 When it came time to crack down on Mac’s Public House, the Staten Island bar that has notoriously defied Covid-19 restrictions, New York City sent in law enforcement officers from the Sheriff’s Office, a relatively tiny force that relies on 150 deputies and remains unknown even to most New Yorkers.

But the obscure sheriff’s office has moved into the spotlight as a surprising and highly visible frontline enforcement unit in the city’s ongoing battle to maintain its coronavirus restrictions.

The deputies have cracked down on restaurants that disobey curfews and indoor-dining rules. They have become staples at bridge and tunnel checkpoints watching for visitors from high-infection states.

Most prominently, they have been the city’s chief party crashers.

The designation of the sheriff’s office as a primary enforcer of restrictions reflects the scramble of states and localities around the country to figure out how they should police a pandemic.

In New York, whether it was the crowded sex club in Queens, the raging Halloween warehouse parties in Brooklyn and the Bronx, or nightclubs with bottle service and D.J.s performing in vacant commercial spaces in midtown Manhattan, it fell to the sheriff’s office to shut them down.

But the deputies are also vigilant about pursuing tips about large gatherings in private homes. They show up and inform hosts that big get-togethers are not permitted.

Though sheriffs in other parts of the country are leading officials with a major role in public safety decisions, the New York City sheriff’s office has long been overshadowed by the New York Police Department.

That changed with the pandemic.

Early on, the police department was carrying out social distancing and lockdown regulations. It generally handles criminal enforcement while the sheriff’s office carries out civil and court orders.

But sheriff’s deputies took on more of those duties as complaints mounted that police officers were discriminating against poor people of color. The N.Y.P.D. was enforcing restrictions more frequently in neighborhoods that had more households that were Black and Hispanic and had lower incomes. The police also had to pivot to address rising crime and to patrol Black Lives Matter protests.