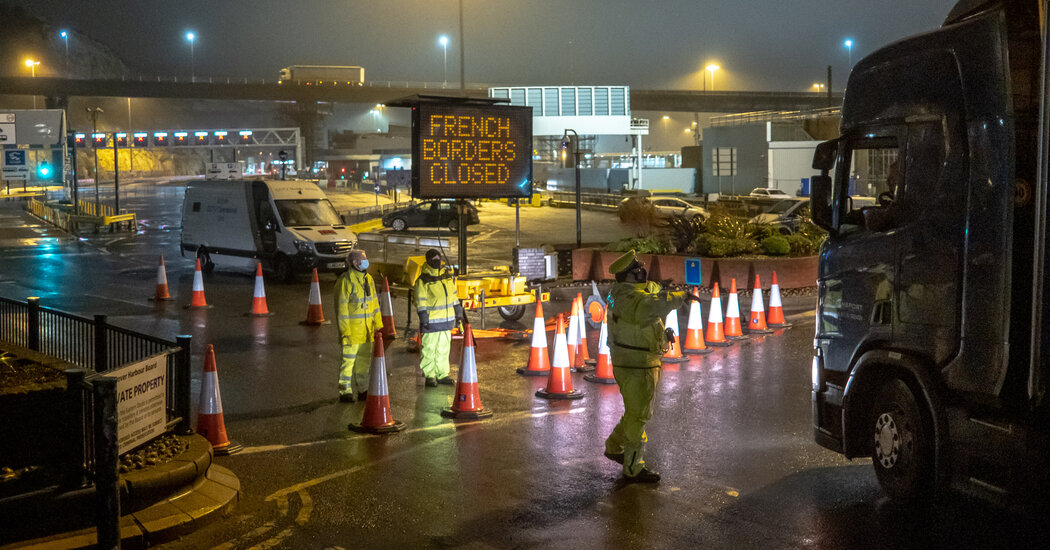 LONDON — Britain was all but cut off from the rest of Europe on Monday, with flights and trains banned by some 40 countries and freight deliveries halted at French ports, as its neighbors tried desperately to stop a fast-spreading variant of the coronavirus from leaping across the English Channel.

The sudden disruption left Britain isolated and unnerved, its people stranded at airports or quarantined at home. It aroused fears of panic buying in British supermarkets, as a nation already rattled by a mysterious new strain of the virus now had to worry about running out of fresh food in the days before Christmas.

It all added up to a chilling preview, a mere 10 days before the deadline to negotiate a post-Brexit trade agreement between Britain and the European Union, of what a chaotic rupture between the two sides might actually look like.

For Prime Minister Boris Johnson, whose handling of the pandemic has been hampered by a reluctance to take tough measures followed by abrupt reversals in the face of alarming new evidence, the cascading events posed perhaps the gravest challenge yet to his ardently pro-Brexit government.

As he huddled in emergency meetings, Mr. Johnson was simultaneously dealing with an escalating public health crisis, deepening economic upheaval and trade talks in Brussels that could cement the break between Britain and its neighbors.

Fears of a dangerous disruption to the food supply eased somewhat over the course of the day, as French officials said they were working to devise health protocols that would allow cross-channel freight shipments to resume.

Mr. Johnson said that he had telephoned President Emmanuel Macron and that the French leader told him “he was keen to sort it out in the next few hours.” Speaking at a news conference, Mr. Johnson assured Britons, “Everyone can continue to shop normally.”

Still, the multiplying problems hammered the stock market and depressed the pound. And there was an unnerving sense that Britain was entering a new, more volatile phase of the pandemic at the very moment that its relationship with its largest trading partner was being thrust into uncharted territory.

Political commentators grasped for a precedent for the chaos, with some harkening back to the turbulent events of 1978 and 1979, when nationwide strikes, compounded by harsh winter weather, led to the collapse of the Labour government and the political ascension of Margaret Thatcher.

“The government has got to do something to get things under control,” said Jonathan Powell, who served as chief of staff to former Prime Minister Tony Blair when a series of strikes in 2000 caused a politically damaging fuel crisis. “The one thing the public hates is when the government loses control.”

The trigger for the current upheaval was Mr. Johnson’s announcement Saturday that he was imposing a strict lockdown on London and the southeast of England, after new data indicated that a viral mutation had turbocharged infection rates in those areas.

Scientists who briefed the press Monday estimate the variant is 50 percent to 70 percent more transmissible than the original virus. (Mr. Johnson had earlier said up to 70 percent.) They raised the possibility that children might be more susceptible to it than to the original virus, though that could be affected by Britain’s decision to leave schools open during lockdowns, which means children are mixing more than adults.

Mr. Johnson’s move was a reversal from three days earlier, when he promised to honor his vow to ease restrictions for a few days around Christmas so that families could get together. Within hours of the announcement, thousands of people thronged railway stations and airports to try to flee London before the new rules took effect.

That, in turn, prompted countries to ban flights from Britain — a list that began with the Netherlands and Belgium and grew to encompass 17 European countries, as well as Canada, India, Russia, Jordan, and Hong Kong. The United States has not yet suspended flights, though Gov. Andrew M. Cuomo of New York was among those urging the Trump administration to do so, and he said he had secured the agreement of British Airways and Delta to test all passenger bound for his state.

The European Union said it would develop a coordinated strategy for how to handle travel to and from Britain. But for now, its actions were uncoordinated, adding to the uncertainty at Heathrow, one of the main airports serving London, and other airports.

The variant has already been identified in small numbers in Denmark, the Netherlands and Australia, according to World Health Organization officials. The Italian health ministry reported on Sunday night that two people arriving in the country from Britain carried the strain.

British officials said they expected countries to ban travelers, since epidemiologists view that as necessary to break the chain of transmission across borders. But they appeared to be caught off guard by the French government’s decision to halt freight shipments, carried by truck drivers, for 48 hours.

France did not take such a step in March, when the virus first erupted in Europe, because the short crossing between the ports of Dover and Calais is a critical trade link for Britain and the continent, with thousands of trucks making the journey each day.

The restriction led to mile-long pileups on both sides of the channel, as hundreds of trucks laden with seafood and produce were stopped along the highway leading to the port of Dover. In Calais, on the French side, truckers waited for health guidance before driving their loads onto ferries to Britain. The lack of clarity left between 2,000 and 3,000 French truckers stranded on the British side.

Britain’s transport minister, Grant Shapps, said about 20 percent of the freight moving in and out of the country had been affected. Unaccompanied goods — such as those loaded in shipping containers — continued to be admitted into France and goods could still be driven to other countries, such as the Netherlands, from smaller ports. He also said the restrictions would not affect shipments of the coronavirus vaccine, which come from a Pfizer plant in Belgium.

Mr. Shapps described the situation as a kind of dry run for potential post-Brexit disruption, noting that the government’s contingency planning had reduced the number of trucks stuck outside the Dover port from more than 500 to about 175.

Still, the gridlock on Monday was so great that one supermarket chain warned of possible shortages of some food products ahead of Christmas, and business groups called for urgent action.

“They are carrying perishable products worth millions and the clock is ticking for that product to survive these delays,” said James Withers, chief executive at Scotland Food & Drink.

He estimated that Scotland would normally ship £5 million, about $6.7 million, worth of food into France every day this week. Britain sends more seafood to the European Union than it imports, especially stocks of salmon, lobster and langoustines.

The disarray, Mr. Withers said, should prompt the government to rethink what happens at the end of the Brexit transition period on Dec. 31.

“The U.K. government has to recognize that we are in the midst of a perfect storm and to risk further disruption and financial damage to businesses in just 10 days’ time is completely unacceptable,” he said.

Supermarket chains said that food supplies for Christmas were already in hand, but that if the travel suspension lasted longer, there would be shortage of items such as lettuce, greens, cauliflower, broccoli and citrus. About a quarter of food consumed in Britain is imported from the European Union.

“Continental truckers will not want to travel here if they have a real fear of getting marooned,” said Ian Wright, the chief executive of the Food and Drink Federation.

The closure of ports is also disrupting parcel deliveries. On Monday, Deutsche Post DHL said deliveries to Britain would also be stopped as more countries impose travel bans on Britain.

With years of experience dealing with disruptions, the port of Dover usually manages to clear traffic backlogs swiftly once ferry service resumes. However, the situation remained fluid and any additional health checks could bring further delays.

The implications of the chaos for Britain’s trade negotiations with Brussels were not clear. Negotiators failed to strike a deal by Sunday night, which the European Parliament had set as a deadline for it to ratify the agreement in time for it to take effect on Jan. 1.

But talks continued in Brussels on Monday, and both sides said a deal could be rushed through even at this late date. Negotiators appeared to have made some progress on the most contentious issue — European access to British fishing grounds — though there were no signs of an imminent breakthrough.

Some analysts interpreted France’s decision to halt freight traffic as a hardball tactic to remind Britain of the costs of failing to strike a trade agreement. Others said they were struck by the lack of communication between Britain and its European neighbors after scientists identified the variant in Britain several weeks ago.

“If the Johnson government had thought this through and actually talked to its partners, this could have been managed better,” said Anand Menon, a professor of European politics at King’s College London. “There seems to have been a failure of information exchange.”

Mr. Menon said the prime minister’s last-minute style and lack of consultation would make it politically more difficult for him both to sell a trade deal and to persuade lawmakers of the need for further lockdowns.

After the Mr. Johnson announced his latest lockdown on Saturday, some lawmakers from his Conservative Party demanded a recall of Parliament, but there are no plans for one at present.

“The idea that this government treats Parliament with contempt is taking root,” Mr. Menon said. “It makes the political cost of this harder to bear.”

While the threat of a fast-spreading variant would have prompted the banning of travel under any circumstances, analysts said Brexit made it politically easier for European governments to isolate Britain.

Mr. Powell, the former aide to Tony Blair, recalled an apocryphal newspaper headline — “Fog in Channel; Continent cut off” — that is often invoked to describe an inward-looking Britain and its arm’s length relationship with the rest of Europe.