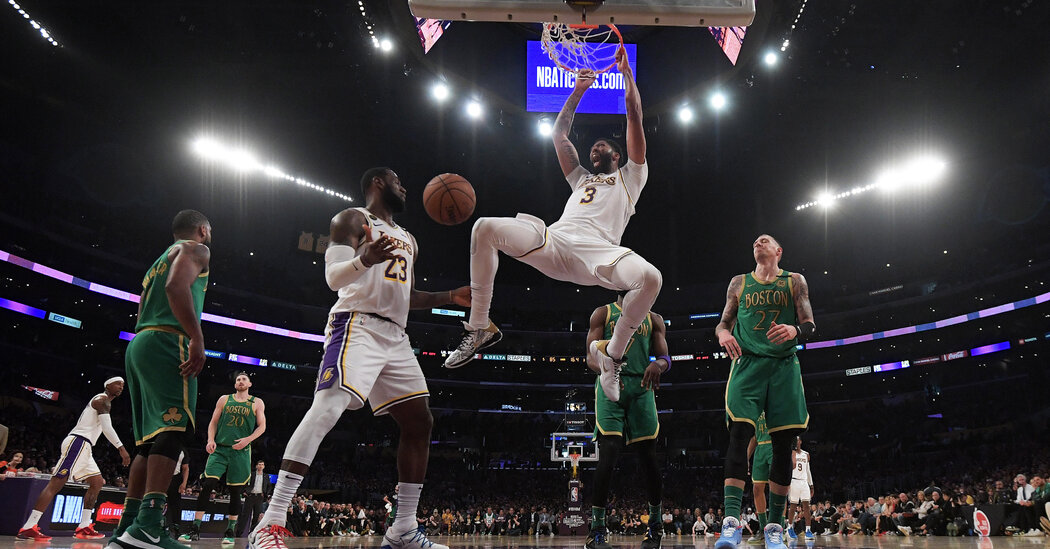 LeBron James was surprised, and a little annoyed, when the N.B.A. unveiled its schedule for the 2020-21 season. He had been hoping for a mid-January start for his title defense with the Los Angeles Lakers. It was wishful thinking.

“I was like, ‘Wow!’” James said at a recent news conference.

The Lakers, just 72 days removed from winning the franchise’s 17th championship, will return to the grind on Tuesday when they face the Clippers, another team with big goals, at Staples Center, the Los Angeles arena that both teams share.

Here is a look at how the Western Conference shapes up after the shortest off-season in league history:

Outlook: The mere presence of James and Anthony Davis, both of whom recommitted to the freshly minted champions with new deals in recent weeks, would be enough for any team to contend for a title. But give the Lakers credit: They were anything but complacent over the league’s abridged off-season. In fact, the front office made upgrades by acquiring Schröder and Harrell, the league’s two top reserves last season. And Gasol and Matthews are crafty veterans who add depth. Add it all up, and the Lakers are even better positioned for a championship run than they were in the bubble.

Outlook: The Clippers would probably love to have a little more distance from their debacle in the bubble, a premature exit in the Western Conference semifinals that raised questions about the team’s chemistry and led to Coach Doc Rivers’s departure. (He landed on his feet with the Philadelphia 76ers.) But the bubble memories have surely lingered for Kawhi Leonard and Paul George, two stars who watched from home as the Lakers claimed the ultimate prize that both teams had been chasing. Now, under the direction of Tyronn Lue, the team’s new coach, the pressure will only mount on the Clippers to deliver.

Outlook: Coming off an enthralling run in the bubble in which they reached the Western Conference finals for the first time in 11 years, the Nuggets appear primed to build on that momentum. Nikola Jokic and Jamal Murray have established themselves as bona fide stars, and Michael Porter Jr. is an elastic-limbed talent with enormous potential. The off-season was a mixed bag — the losses of Grant and Craig could hurt the team on defense — and Coach Mike Malone has groused about the team’s focus in the preseason. But no team put more into the league’s restart last season, or came out of the experience better for it.

Outlook: Is this the season when the Mavericks — and Luka Doncic, a fashionable pick to win his first N.B.A. Most Valuable Player Award — break free from the middle of the Western Conference pack and make a deep playoff run? The team tried to address concerns about its porous defense by acquiring the likes of Richardson and Johnson, who add toughness. But there are lingering concerns, too, and Kristaps Porzingis finds himself at the center of them. Porzingis, who has struggled to stay healthy dating to his days with the Knicks, had surgery on his right knee in October.

Outlook: Since 2016, the Jazz have doing good job being relevant. Not extraordinary. Not dominant. Just relevant. Now, after their second straight first-round playoff exit, the Jazz are hoping that they can take another step with largely the same pieces. Over the off-season, they committed millions to Donovan Mitchell and Jordan Clarkson while doing little to remedy their issues defending perimeter scorers.

Outlook: After making five straight appearances in the N.B.A. finals and coming away with three championships, the Warriors were essentially on hiatus last season. Their stars were injured. Coach Steve Kerr played a bunch of young guys, and things got glum in a hurry: Golden State finished with the worst record in the league. The good news is that Stephen Curry is back this season, and the Warriors bulked up their frontcourt by selecting Wiseman with the second pick in the draft. Now, the bad news: Thompson, after missing all of last season with a torn anterior cruciate ligament in his left knee, tore his right Achilles’ tendon in an off-season workout and will be sidelined for his second straight season. Without him, the Warriors cannot expect to vie for a title. But they should be back in the playoff hunt.

Outlook: Credit the Blazers for addressing one of their weaknesses by acquiring Covington and Jones, versatile forwards who can defend and shoot. But all eyes are again on Damian Lillard, the All-Star point guard who is coming off his finest season for an underperforming team. He has repeatedly pledged his loyalty to Portland, and he has a long-term contract to prove it. He needs his supporting cast to come through.

Outlook: In the wake of a tumultuous off-season in which the general manager (Daryl Morey) and the coach (Mike D’Antoni) both decamped for new roles, the team’s best player wants out, too. James Harden finally showed up late to training camp after partying in Atlanta and Las Vegas, and it is clear he wants to be traded. The front office can take its time with that request as the franchise acclimates itself to a new-look roster that includes Wall and Cousins, two big-name reclamation projects who are coming off serious injuries.

Outlook: The Suns, led by Devin Booker, made an impression by closing out last season with an eight-game winning streak in the bubble. Then they made an even bigger splash in the off-season by engineering a trade with the Oklahoma City Thunder to acquire Paul, the veteran point guard. Don’t overlook the addition of Crowder, either. There are plenty of reasons to be optimistic about the future of the Suns, who could find themselves back in the playoffs after a 10-year absence.

Outlook: Led by Ja Morant, the N.B.A.’s rookie of the year, the Grizzlies were among the league’s fun surprises last season. They are young and talented, and this figures to be another growing season — especially after they welcome back Jaren Jackson Jr., their starting center, from a knee injury he sustained in August.

Outlook: The Pelicans are going to be preaching patience after trading Holiday to the Bucks for a gleaming collection of future first-round picks. They also re-signed Brandon Ingram to a long-term deal. And Zion Williamson should take another step in his development if he can stay on the court. But this figures to be a building year under Stan Van Gundy, who has returned to coaching after a foray as a broadcaster.

Outlook: The Timberwolves are coming off a disappointing, injury-marred season. But they presumably have their core in place, after adding Edwards, a shooting guard and the top overall pick in November’s N.B.A. draft, to a roster headlined by Karl-Anthony Towns and D’Angelo Russell. There will be growing pains, of course, and it would be surprising to see the Timberwolves in the thick of the playoffs. But they should show improvement.

Outlook: The Spurs had made 22 straight playoff appearances before they fell short last season. It could be another challenging season for Coach Gregg Popovich after a quiet couple of months for the front office. The Spurs still employ DeMar DeRozan and LaMarcus Aldridge, which means they will have a fighting chance to make the playoffs. But in a power-packed conference, it will be a steep climb.

Outlook: The Thunder have amassed an incredible collection of future first-round picks by trading players like Paul, a veteran who had been instrumental in leading the team last season. But General Manager Sam Presti has chosen to take the long view as the Thunder seek to build through the draft. In the short term, that means they could be facing a lean few months.

Outlook: It seems a safe bet to add another season to the league’s longest playoff drought. The Kings opted not to match the Atlanta Hawks’ contract offer to Bogdanovic, a restricted free agent, as they look toward the future with De’Aaron Fox, Marvin Bagley III and Haliburton, a first-year shooting guard.