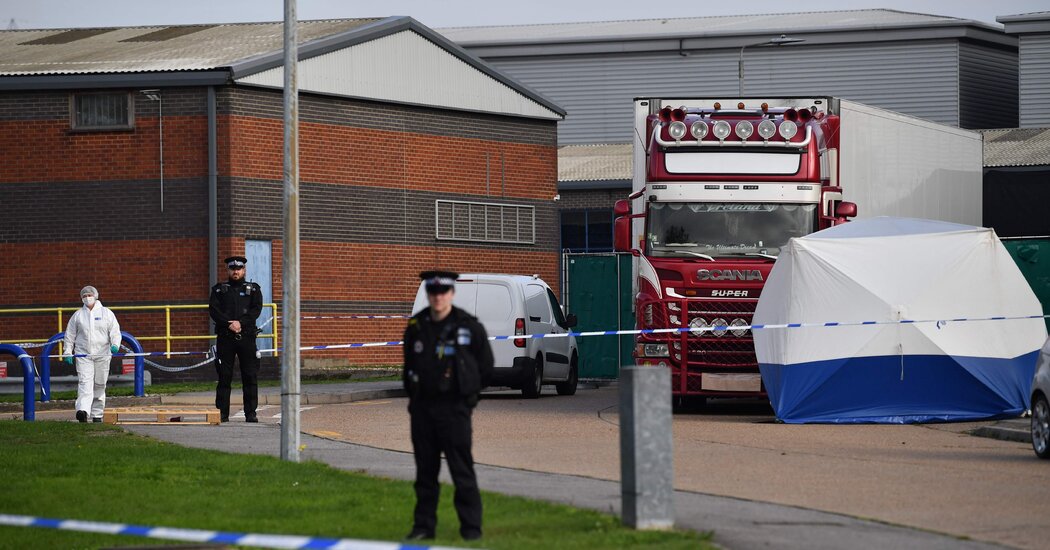 LONDON — Two members of an international people-smuggling gang were convicted of manslaughter on Monday over the deaths of 39 people whose bodies were found in the back of a container truck in southeastern England last year.

A jury at the Central Criminal Court in London found Gheorghe Nica, a 43-year-old mechanic from Romania, and Eamonn Harrison, a 24-year-old truck driver from Northern Ireland, guilty of the deaths of the migrants, who were Vietnamese citizens.

The victims, ages 15 to 44, were found in the English town of Grays in October 2019, inside a refrigerated container that had arrived by ferry from Belgium. The migrants came from impoverished villages and are believed to have paid smugglers to take them on risky journeys in search of better lives abroad.

Prosecutors said that Mr. Harrison had driven the container to the Belgian port of Zeebrugge for transport to Britain. Mr. Nica was described as the smuggling gang’s ringmaster.

Two other suspects, Christopher Kennedy and Valentin Calota, were convicted of people-smuggling on Monday at the end of the 10-week trial.

Several others have pleaded guilty in the case, including Maurice Robinson, 26, a truck driver who picked up the container in England. He has admitted to 39 counts of manslaughter.

All will be sentenced later. The maximum sentence in Britain for people-smuggling is 14 years in prison, while manslaughter carries a potential life sentence.

Kelly Matthews of the British Crown Prosecution Service said: “Nothing can bring back the lives lost on that day or the loss caused by the horrible, unlawful and dangerous actions of these defendants. But we hope these convictions bring some measure of solace to the families in the knowledge that justice has been done.”